MAKING PROGRESS: a photo collage displaying the progress made on the commons and purple gym hallway at DGN. (Photo provided by District 99)

MAKING PROGRESS: a photo collage displaying the progress made on the commons and purple gym hallway at DGN.

Hey, students. This is a series of news updates by me, Omega Editor-in-Chief and District 99 Board of Education Student Representative Sam Bull, that is designed to inform you, the DGN student body, of the most relevant changes, decisions, and updates from the most recent Board of Education meeting. In other words: this is exactly what you need to know from every Board meeting.

Last night’s meeting was a long one, but there wasn’t a huge amount of information directly relevant to students. Here’s what you need to know:

The CSSS department gave a presentation about systems of support for students for three main categories: academic, social/emotional, and post-secondary.

The presenters, including Associate Principal for Student Support Services Erin Ludwick, explained how the department looks at a variety of different factors to identify a problem that a student is struggling with and then uses a tiered approach, which often involves parents, for attempting to help the student.

“A lot of the time, the combined effort between the parents, teacher, and counselor team is successful in making a positive change, especially in the area of academics or in helping the student identify what the social-emotional needs are,” Ludwick said.

Board member Rick Pavinato raised concerns about a lack of frequent check-ins with students and parents from counselors, to which CSSS chairperson David King responded with an acknowledgment that the department faces difficulty in reaching and having frequent conversations with every student.

However, King went on to suggest that the problem could be minimized if teachers do the checking in (as many already do) and get in touch with CSSS to offer systems of support if the student’s response is one that raises concern.

“Hopefully, as we continue back into a hybrid model, that service level of social-emotional support is going to be supported even more so in the classroom by our wonderful teachers at North and South, but then they know they’ve got the people over in CSSS that are ready to swoop in and help should that question of ‘how are you doing today?’ take us in a different direction,” King said.

If you want to view the whole CSSS presentation, click here. The presentation begins at around 25:30 and discussion lingers on until around 1:15:00.

There wasn’t much new information on the return to in-person learning for this Board meeting—much of it was reiterating from Dec. 14’s meeting.

There was a passionate discussion about the 9% statistic between Board members and if it should be moved, but it seemed as though the consensus from a majority of the Board was that 9% is a solid benchmark and already functions as the highest number the administration feels comfortable with for sending students back to school.

The Illinois School Board of Education (ISBE) is required by law to inform districts who fall into the top 20% of schools in the state of any of these three categories: number of suspensions relative to school population, number of expulsions relative to school population, and racial disproportionality with respect to suspensions or expulsions. While District 99 is in the bottom quartile for the first two categories, it was also notified as falling into the top 20% of that third category. 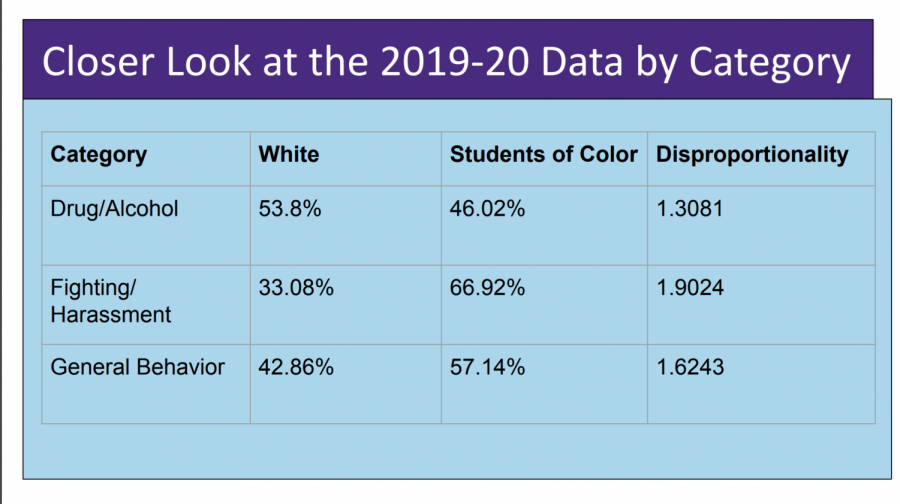 Gallery|2 Photos
Photo provided by District 99
DISPROPORTIONALITY: According to Zuerner, achieving no disproportionality would mean the number would be at 1. If the number is greater than 1, that greater number is the number of students of color suspended/expelled for every one white student suspended for the same offense.

The presentation noted that groups like the D99 Discipline Committee and a newly-implemented PATH program have both been working to achieve the district’s goals regarding discipline and improve this significant disparity in statistics. Improvements have been made over the last several years with regard to District 99’s racial disproportionality, but it still falls within that top 20%.

Construction continues on the commons, which was formerly the open courtyard in the middle of the school. There will eventually be a three-story glass window on the south side of the building looking into the commons.