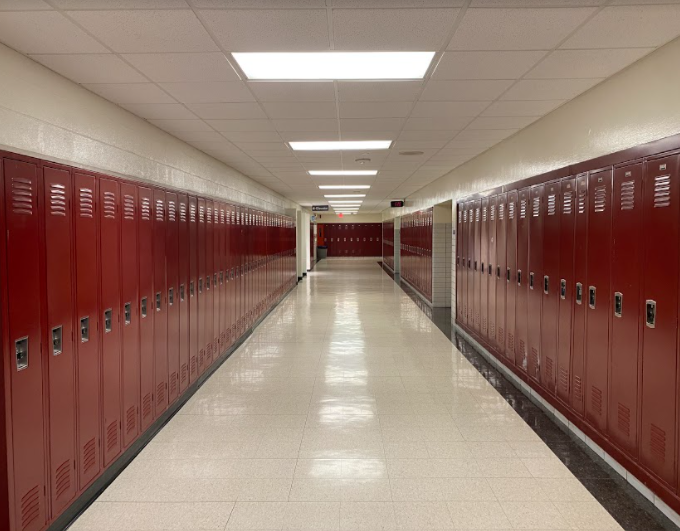 OUTDATED LOCKERS? As the school year progresses students and staff notice a decrease in locker usage.

The decrease in locker usage

While numerous students at DGN use their lockers, many have noticed a decrease in usage over the last few years. Students would rush to their lockers before their next class to retrieve their books, but whether it be the new renovations or a larger amount of school work being online, there has been a noticeable decrease in locker usage this school year amongst students across all grades.

This year’s seniors are the last remaining students who were in the building for a full school year before the start of the renovations. After roughly two years of renovations, many stairwells have been sealed off and some hallways now include study rooms, leaving little room for the lockers that once stood there.

Senior Emily Bormann was just one of the many students who were reassigned to a different locker due to the renovations. While she knows where her new locker is, she feels as though its location is too inconvenient for her to visit.

“Freshman and sophomore year I actually used my locker pretty frequently,” Boremann said. “It’s in a completely different hallway now and I don’t have any classes near it so I don’t use it anymore”.

While this may seem like it would only be the case for students whose lockers were moved, underclassmen seem to have an issue with the placement of their lockers as well. Some students have already gotten used to using their locker solely for after-school activities.

“Since I’m in my [volleyball] season, I’ll visit my locker twice a day. Once in the morning to put in my athletic backpack, and once after school to take it out,” freshman Lauren Haroldson said. “After my season is over, I don’t plan on using my locker”.

Haroldson also noticed that students tend to prefer carrying stuff with them throughout the day rather than taking the time to visit their lockers.

“I’ve seen people stuffing their backpacks with either their homework, clothes, or lunch boxes after class,” Haroldson said. “I guess the lockers are inconvenient enough that people would rather walk around with a heavier backpack”.

A survey was sent out Sept. 21 by student activities director Mark Marindola regarding the usage and convenience of lockers. The survey was filled out anonymously by 283 students, with 44.2 percent of students saying that they have never used their locker.

When asked if lockers are a necessity, many students claimed that the inaccessibility outweighs the convenience. A common response from the survey said, “Some of the lockers are very hard to access, so most students can’t use them even if they needed to”.

Other students such as senior Sandy Brindl still use their lockers throughout the day to avoid a heavy backpack. Even then, she still expresses concerns for the inconvenience of the placement of her locker.

“I use my locker every day because my locker is right next to the lunchroom,” Brindl said. “I’ll put my lunch in there just to avoid carrying it but I don’t have time to ever visit my locker besides during lunch”.

This year’s sophomores are commonly referred to as second-year freshmen by upperclassmen. Since their first year of high school was done through remote learning, most things were new to them this year as if they were freshmen.

Sophomore Elze Jonusas was one of the many students who chose to attend hybrid learning when it was offered last year. While she did get a chance to visit the building and attend her classes, locker usage was out of the question.

“They didn’t let us use our lockers so I tried not to bring much to school,” Jonusas said. “I got used to not having one so now even though I have a locker, I don’t use it”.

Teachers have noticed a shift in locker usage as well. While students are all individually assigned a locker, many have started to share or switch lockers for convenience.

“I think they’re using them in different ways than intended,” Science teacher Jeff Grant said. “Where there is one locker for every student, I think friends are sharing friends’ lockers as a drop point for convenience”.

Another factor of decreased locker usage could be the fact that teachers will more frequently give out assignments via Google Classroom. While bookwork and packet overloads used to be fairly common, it is becoming more unusual to see paper homework being assigned.

Senior Natalia Greaney seems to agree. With only a few classes giving out papers, most of her assignments are conveniently done and saved on her Chromebook.

“I barely even keep anything in my backpack because everything I need is basically in my Chromebook,” Greaney said. “I’ll keep a notebook and a folder but that’s about it. I don’t even know where my locker is because I don’t use it, I have nothing to put in there”.

Other students, such as senior Payton Janicki, use their lockers only a few times throughout the school year to help lighten their everyday load.

“I did open my locker once this year to put in the class books we are given every year,” Janicki said. “But I don’t use them since the pdf version is offered online”.

Notetaking in classrooms seems to have taken a different approach as well, with many teachers offering students the choice of taking notes either on paper or a Chromebook.

“I think that the option is really nice, especially for people who prefer to type instead of writing,” Janicki said. “I’ve noticed that people who lose track of their papers are the ones to be typing, it definitely helps them with organization”.

When asked what students used their lockers for, if they did use them at all, only 33.2 percent said that they stored school-related items in their locker.

Whether it be the renovations, school work being online, or the inconvenience of lockers in general, an increasing number of students are starting to abandon their lockers. It could be that schools in the near future will begin to think of alternatives and utilize their space for something more convenient.

“It’s weird to think about, but I think lockers are starting to become outdated,” Janicki said.