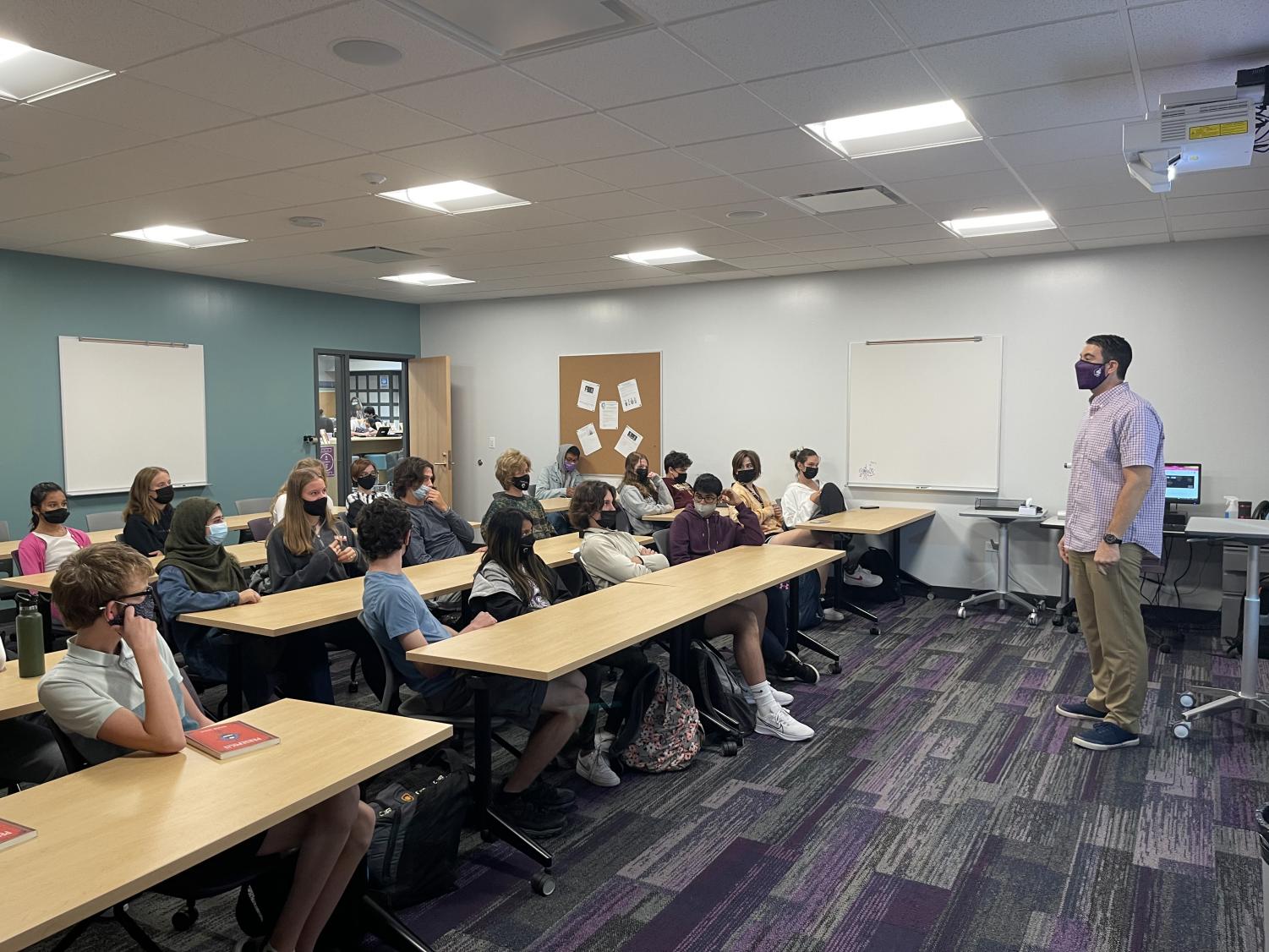 LEARNING: English teacher Mike Melie teaches his fourth period sophomore English II honors class as they get back into the groove of in-person learning (Photo by Kyle Kucera)

LEARNING: English teacher Mike Melie teaches his fourth period sophomore English II honors class as they get back into the groove of in-person learning

After the pandemic turned the class of 2024’s freshman year almost fully remote, they must adjust to what ‘normal’ high school life is like this year. What little experience they had at DGN last year was disrupted by construction, and this year, everyone walked into an almost entirely new school. Walking into their sophomore year with such little experience of DGN, this year’s sophomores could be considered a second ‘freshmen class.’

As freshmen, the class of 2024 was not able to acclimate to high school like any other group of students. Beginning the school year online and only experiencing a few months of in-person learning posed many physical and mental challenges.

“I feel like I definitely missed out on game days; I never knew what it was like before a football game, and of course homecoming and other events like that. Experiencing what it was like to see so many people in the school at once was definitely different,” sophomore Jennifer Lucina said.

Apart from the challenges caused by remote learning, the class of 2024 encountered another difficulty: navigating the building. Their in-person learning experiences last year were disrupted by the construction which blocked off certain hallways and stairwells.

“High school is definitely a big change from middle school, especially learning to navigate the building at first, but after a while, it was pretty easy to get used to all the hallways and eventually figure out where all the different stairways lead to,” sophomore Gina Liu said.

“Since we had half days and the school was split into groups last year, I never got a feel for how many people actually went to North and how many people were invested in different clubs,” sophomore Olivia Zambreno said. “Since there are so many options for things to participate in during the school year, it was a bit overwhelming to choose what you wanted to take part in while managing all of your classes in one day, instead of just having four classes per day.”

Another challenge posed to the class of 2024 was getting involved. With the lack of an activity fair last year and consistent club meetings, some sophomores had trouble choosing activities where they could meet new people. However, this year, sophomores have found it easier to get involved.

“This year, the administrators have done a great job setting up events like the activities fair where we could walk around and talk to members of each club. I think that it may have been hard for some people to adjust this year, but for the majority, I think that it has been fairly easy to get involved,” sophomore Will Beatty said.

Last year’s sports seasons are another aspect that was not what some sophomores had hoped for. With many sports teams already playing a normal season, sophomores are hopeful that winter and spring sports will play as planned.

“This year I am going to play baseball. I played my freshman year although our season was shortened so I’m excited to play this year now that we will hopefully have a normal, full season,” sophomore Nate Edelman said.

Overall, many sophomores felt like the experiences they had of DGN last year made the transition this year much smoother. Apart from some trouble navigating the new construction, which most students felt, getting involved and assimilating to DGN was not too bad.

“It’s been easy to adjust and I love being able to be in the building with my friends during classes, sports, and other activities. Freshman year was definitely different, but it was a unique experience that allowed us to now experience an almost normal sophomore year,” Liu said.