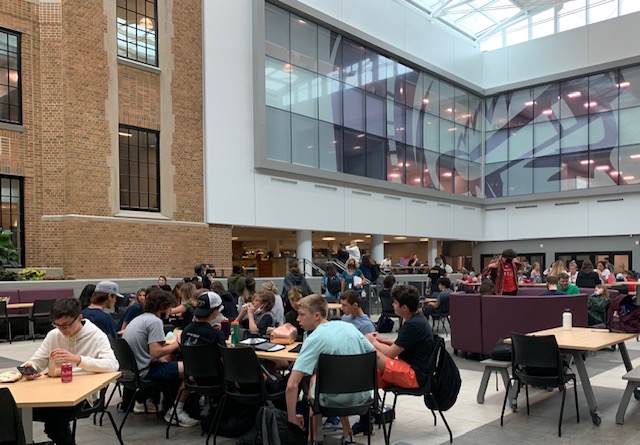 A DIFFERENT SCENE: Students socialize during a lunch period in the Learning Commons. The new area stands in contrast to the old cafeteria, with students now having more diverse seating options and a full 50-minute period to eat lunch.

After detailed preparation, careful consideration and roughly a year and a half of construction, DGN’s new Learning Commons stands complete, open for all students and staff to use at their disposal. Overall, students and staff have expressed enthusiasm and positive feedback about this new and improved addition to the school.

According to associate principal for operations and technology Dr. Ken Sorensen, District 99 invested approximately $8 million to build the Commons. Located at the heart of DGN, the new area sprawls a total of 18,350 square feet and contains a variety of fresh and refurbished features, including an outdoor patio and private study rooms.

“We wanted to make any new space that we designed and built very flexible so that it can be used in multiple ways to give teachers and students opportunities to use the space in a way that’s best for them,” Sorensen said.

From Arrangements to Results

The installation of the Commons was part of the third and final phase of the Master Facility Plan, in which Sorensen, alongside former principal Janice Schwarze and buildings and grounds supervisor Michelle Cannon, took an active role. The plan consisted of several upgrades on various parts of the building, including the courtyard, library, cafeteria and fine arts department, among many others.

Of these renovations, Sorensen deemed the Commons the most dignified and transformed.

“[It’s] a beautiful space. And that’s what I’ve heard from students and staff. They’re impressed, especially when you walk on that second-floor bridge and that third-floor area [where] you’re looking down,” Sorensen said.

Included in the third and final stage of the Master Facility Plan, Phase C, the main establishment of the Commons began during the 2020-2021 school year. Aside from smaller features like the recently opened coffee shop and the arrival of outdoor furniture for the patio—which arrived yesterday—the bulk of the construction of the Commons was complete at the start of August.

According to Sorensen, the Commons is quite an improvement from DGN’s original layout in various ways. Students have an abundance of resources at their disposal, which they can utilize at any time of the day. The new area grants students a level of accessibility, with the renovated College and Career Center, Student Activities Office and Bookstore located along the northmost wall of the Commons and Student and Support Services, the library and the Academic Resource Room within close proximity.

Director of student activities Mark Mirandola also noted how the physical layout of the Commons promotes flexibility for students.

“What makes the Commons really well-thought-out is that there are different types of seating arrangements for any kind of student,” Mirandola said. “If you want to meet with a large group, you can hang out at a high-top table or the half-circle seating pod. I’ve seen small meetings or kids planning out school activities. But there’s also plenty of really nice spaces [to go] if you just want to come and be alone.”

But that’s not all. Rather than the brief 20-minute lunch students experienced before, the Commons presents them with a whole 50-minute period—and eating lunch is not nearly the only thing students can partake in during that time.

“We’re not only providing a longer lunch to eat, time to eat, but also time to just sit and talk, decompress and check in with some things,” Sorensen said, “You’ve got time now. You don’t have to be rushed before or after school to go to the student activities office or check in with a counselor. You can do that all during the [50-minute period].”

On the whole, the significant amount of planning and effort put into creating the Commons has paid off, garnering an overall positive reaction from both students and staff.

Freshman Henry Ham takes pleasure in eating his lunch and doing his homework on the new patio, explaining how he never experienced anything of the sort before.

“It’s nice to be able to be outside during my lunch period. I haven’t really gotten that at any of the other schools I’ve been to, and the area itself is really nice to be in on its own,” Ham said.

Likewise, junior Colleen Engstler expressed her enthusiasm about the greater amount of accessibility that the Commons provides.

“The [area] allows students to grow and work productively, and the open layout makes all the surrounding resources easily accessible,” Engstler said. “It’s very convenient to find these places when I have to pick up my yearbook or ID for example.”

Staff members have also seen the impact of the Commons on the student body. Lead campus security officer Russ Rau has spent lots of time patrolling the new area and has noticed how so far, students have enjoyed it and embraced the benefits it presents.

“I think the learning commons is a great addition to the school and a much-needed area for students. It allows them an area to study, socialize and just go to and relax,” Rau said. “In my overall observation, they have really done a great job respecting the learning commons and using it for its intended use.”

Yet the Commons has ultimately generated more than satisfaction and appeasement from the student body. Mirandola explained how the new addition has led to a more infectious result: a stronger feeling of pride and esteem for the school as a whole.

“I think [the Commons] is the biggest game-changer in the history of our school,” Mirandola said. “I definitely feel that in my 15 years here, there’s been more energy and more school spirit than ever before. You can tell that kids want to be here more than they ever have. As a staff member, it’s exciting. You feel that good energy. It’s contagious.”