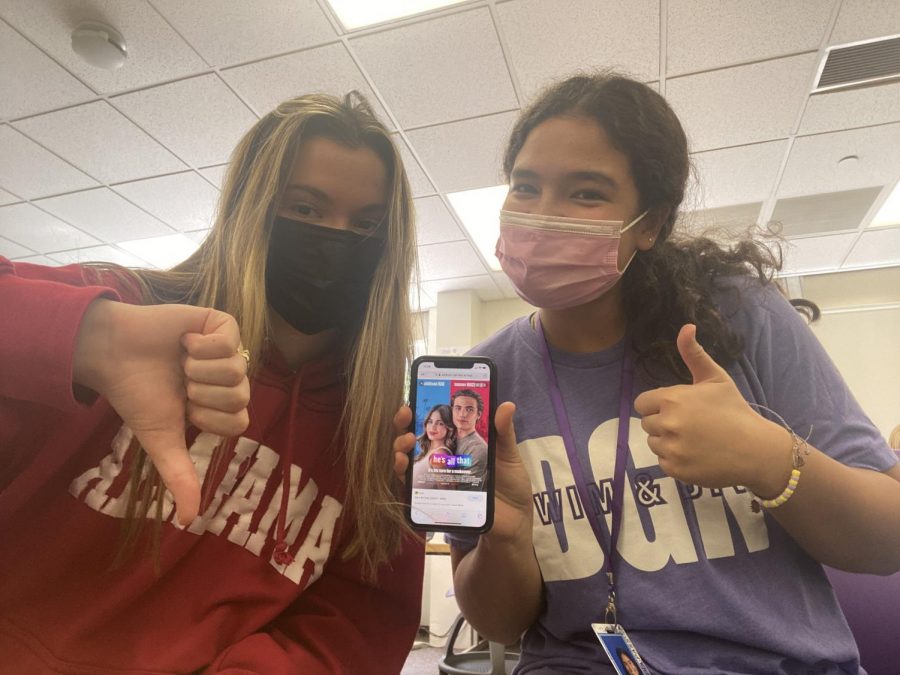 HEAD-TO-HEAD: Seniors Gretchen Lucina and Maeve Dietrich write about the new movie He’s all that.

Head to head: He’s All That

He’s definitely All That

To my amazement, He’s All That exceeded my expectations enormously (to be fair my standard for the movie was at an all time low). I personally do not like TikTok stars because I think it is ridiculous how much they get paid for doing a simple dance. Hearing TikTok star Addison Rae was the lead in the new movie, I needed to watch it just to make fun of it. Now I feel guilty because I highly enjoyed the movie.

Airing on Netflix Aug. 25, the movie starts with Padgett’s (Addison Rae) boyfriend cheating on her while her ‘so-called’ friends videotaping it. Padgett is very famous on the internet, living a perfect life but in reality, she is far from perfect, living an average life. She and her friends make a bet that she will have to pick another outcast boy, Cameron, and transform him to become popular.

For being a TikTok star, Addison Rae’s acting was better than I’d expect. For being a Tiktok star, I would say her acting in the movie was better than good. There were definitely some parts in the movie where I cringed, but overall Rae did a good job in playing her role. When I put my knowledge of how she became famous aside and watched the movie, I would’ve just thought that she was a beginning actress.

I think the directors were smart in choosing Rae to be in the movie along with Kourtney Kardashian (playing Padgett’s manager) because it brought attention to the movie making people watch it.

Despite what some might say (@ Maeve), Cameron (Tanner Buchanan) had more than just a haircut transformation. She claims changing his hair is all that he did, but that’s just not true. Switching up his wardrobe, having a personality growth by becoming more social, and (yes) the hair, were all things that added to his dramatic glow up. Buchanan was perfect for the role, playing the nerdy schoolboy and the transformed cool kid to a T.

Addison Rae has been getting hate from other critics about her role in He’s All That. But, one actress in a movie shouldn’t determine whether you like it or not. If you get over the fact that you don’t like her, then you will love the movie. Only being an hour and 30 minutes, it’s a short, entertaining movie.

The different sets, scenes, and characters made the movie for me. Every set was displayed excellently, my favorite being the difference between Padgett’s fancy room, and the rest of her house looking completely average. The scenes could get a little much sometimes, but all in all, they were pleasing.

Whether it is to make fun of it or just for something to do, just watch the movie yourself. I started the movie looking to hate it, but I was pleasantly surprised and that could be you.

He’s not All That

As I settled down to watch He’s All That, I expected to be unimpressed by a predictable plot that had no really working climax and random Kim Kardashian cameos. Nevertheless, this movie hit it right on the head.

Addison Rae Easterling gets off TikTok to act in the twist-off of 1999’s She’s All That. He’s All That sets the repetitive, twenty-first-century narrative of the popular girl who loses her social status and is willing to do anything to get it back.  Padget (Addison Rae) gets dumped on Instagram Live thanks to her scheming best friend and idiot ex-boyfriend Jordan. She finds a mysterious and anti-social horse boy named Cameron, who she believes can be her perfect match.

While a messy breakup seems like something that would really cause some talk around a high school, I would be shocked if the source was an Instagram live stream. Padget and her friends seem to be constantly live streaming all of their lives, which is not something that the average high school student is doing. In the beginning, she catches her boyfriend at the time cheating on her, a friend broadcasts her reaction to the internet, causing a social downfall. Considering that the producers of this movie chose to have a star that was built by social media, more research of how Gen Z actually interacts on social media would have made the quality of the movie instantly better.

The only benefit of Kourtney Kardashian’s (Jessica Miles Torres) cameo in He’s All That was getting to put her name in headlines. Just because her last name is Kardashian does not mean she will be the perfect contender for an acting role. We also see zero character development in this role, as Jessica Miles Torres and Padget have very little contact throughout the course of the film.

What is almost comical to me is how once Cameron just cuts his hair, he is the whole school’s dream boy. I hear several teens make jokes about how a haircut can change people’s attractiveness, but this was hysterically unrealistic. Sure, in the movie there might have been a confidence boost by the haircut and a new wardrobe, so he becomes this dream boy and fights off bad boy Jordan. Realistically, though, an overnight mental and social glow-up is not something that happens outside of Addison Rae’s fantasy world. My wonderful co-editor Gretchen Lucina and I will have to agree to disagree on this one.

I will have to agree with Lucina about Easterling’s level of acting. This seemed to be Easterling’s  big debut in the film side of the entertainment industry and, frankly, she did do better than I think anybody was expecting. It’s always refreshing to see people, who had lots handed to them, do more with themselves instead of settling for what they have.  While there definitely is lots of growing to be done with Easterling’s skills, it was not her acting that did not do it for me.

As wild as it might seem, I would only recommend watching  He’s All That if you are just feeling the need to make fun of cheesy fictional characters to let off some steam.