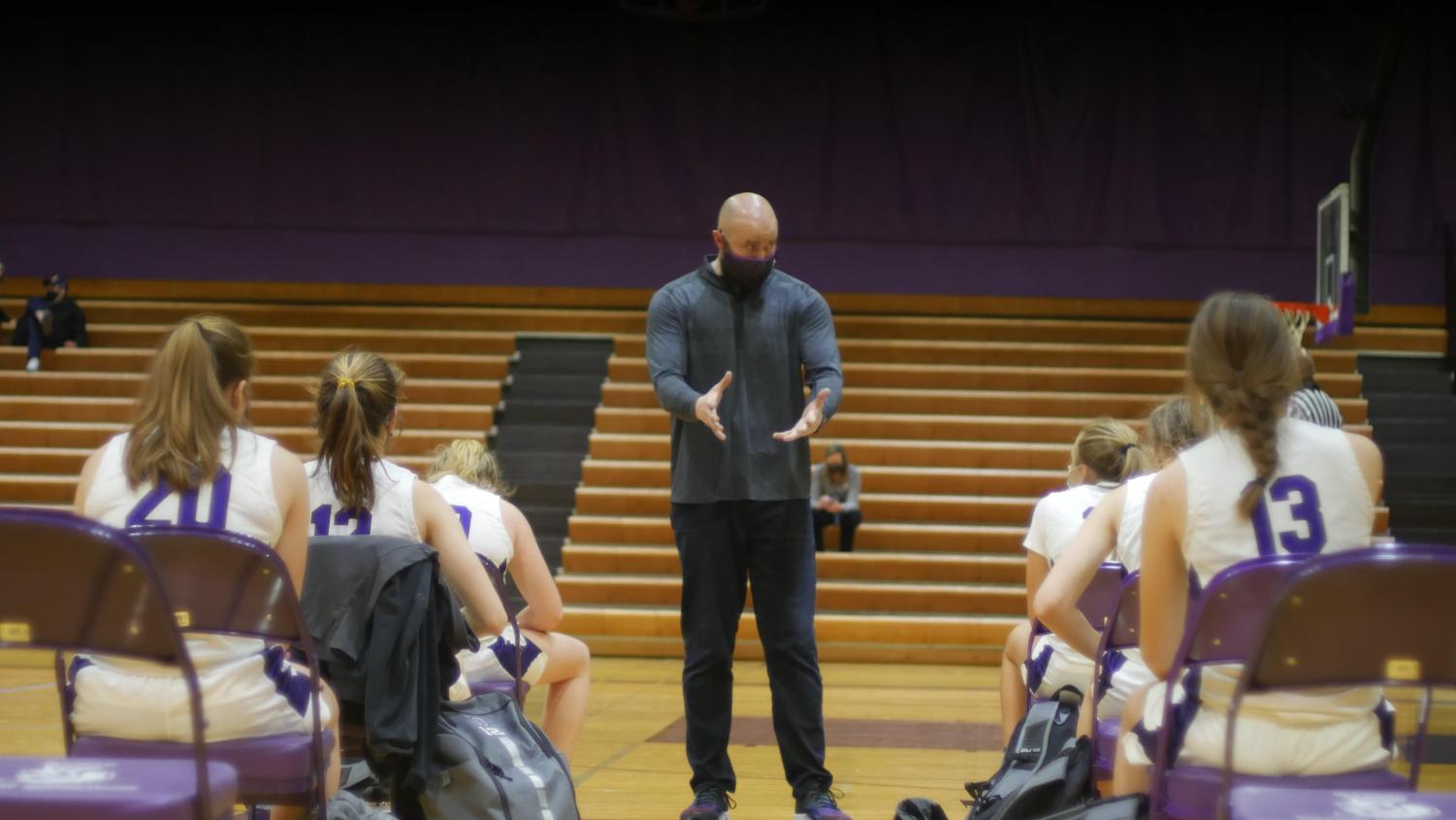 BRING IT IN (but not too close): Coach Bolt talks to a socially distant huddle. In the Purple Gym’s first basketball game since March of 2020, the Trojans beat the Addison Trail Blazers by over 20 points. (Nolen Stevens)

BRING IT IN (but not too close): Coach Bolt talks to a socially distant huddle. In the Purple Gym’s first basketball game since March of 2020, the Trojans beat the Addison Trail Blazers by over 20 points.

Almost 11 months since the end of high school sports as we knew them, the girls’ varsity basketball team rang in a new (and hopefully temporary) era of DGN basketball with a 41-19 victory against the Addison Trail Blazers last night. Despite the anticipation surrounding the game, the Purple Gym was eerily quiet for the majority of the first half.

“It was strange to start the game. It was like ‘Are we here?’ I think everybody was just questioning like, ‘Is this real, is this a dream? I don’t know what’s happening,’” head coach Stephen Bolt said.

From the bench to the Trojans’ offense, the 1st quarter was noiseless. The home team found open shots, but those shots refused to fall, leaving the Trojans trailing 9-13 heading into the second quarter. With about 4 minutes remaining in the half, junior guard Ryann Wendt drained the first Trojan 3-pointer of the night. A minute later, sophomore forward Maggie Fleming hit another.

The true momentum shift, however, came on the other side of the ball. The Trojans played noticeably higher pressure defense to start the second quarter, with junior guard Ella Sebek leading the charge. Sebek commented on the change in energy and momentum.

“I think it was just weird being back, and the jitter we had. But as soon as we started realizing that we’re actually playing and we’re back together, that energy just came to us, and so did our lead,” Sebek said.

The first audible cheer from the Trojan sideline came with 25 seconds remaining in the first half. Sebek’s dynamic defense caused the excitement.

Disciplined man-to-man defense is a core principle of the girls’ basketball program under Bolt. Wendt explained that when it came time to prepare for game day with such short notice (only about seven practices) the Trojans trusted the basics rather than a scouting report.

“I think with the way we play defense we don’t really need to look at the other team. We can just know that our defense will stop any team that we play against, and if we do everything right, the stops will lead to baskets on the other end and will lead to good shots and good energy,” Wendt said.

A testament to her own words on good defense generating good offense, Wendt opened the third quarter with a steal transitioned into a lay-up. Junior guard Kate Gross poured in a 3-pointer, junior guard Kyla Wilkerson hit two outside shots, and junior forward Eleanor Harris added a few tally marks to an already impressive evening in the paint.

When the final horn sounded, the scoreboard read 41-19 in favor of the Trojans. While a win always feels good, the general consensus from the sideline to the athletic office was that the outcome of the game wasn’t as important as finally returning to the Purple Gym as a team and a community.

Athletic director Denise Kavanaugh explained that she loves the interactive nature of her job, and, despite the organizational challenges, was happy to see competition in the gym once again.

“I love being around the kids. So the hard part [of the pandemic] for me has been kind of the hard part for you guys. Not being here with everyone, and being normal, and having an event, and being excited,” Kavanaugh said. “So today, even though it was so hectic–and we were ready–I’m just happy.”

Coming off the best season in program history, the Trojans are young and hungry. The current varsity roster is comprised of 11 juniors and two sophomores after graduating major contributors Ellie Gross and Alexis Parker in 2020.

Though the team is young in age, Bolt is confident in the talent, experience, and potential of his girls.