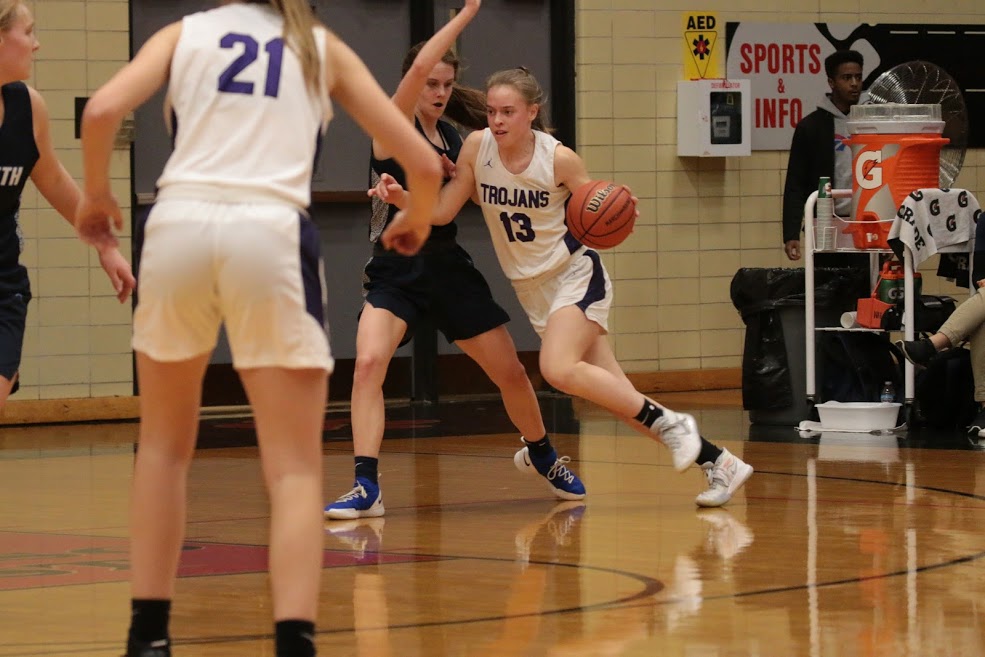 MAKING A MOVE: Maggie Fleming (09) drives against Nazareth. the Trojans beat the Roadrunners 45-31 to claim a Regional title. (Jen Stephens )

MAKING A MOVE: Maggie Fleming (09) drives against Nazareth. the Trojans beat the Roadrunners 45-31 to claim a Regional title.

Girls’ basketball’s win at Hinsdale Central Feb. 21 was monumental for two reasons. The 47-19 victory earned the Trojans a Regional title and moved the team’s overall record to 27-6, setting a DGN record for the most wins in a single season.

The Trojans fell just short of a Conference title following a 41-34 loss to York on Feb. 4.

“It was disappointing to lose to York at home because I think our kids wanted that [win], but I also think things happen for a reason,” head varsity coach Stephen Bolt said. “Maybe we’re at where we’re at now because we suffered that loss.”

The Trojans won out the rest of the regular season, carrying momentum into the Regional championship against Hinsdale Central.

Bolt liked what he saw.

“The girls were awesome defensively and awesome offensively. They finished around the basket, made the extra pass, found each other, I was really proud,” Bolt said. “It was one of those games, and I hope it continues, but they saw everything come together on both sides of the floor, and we dominated.”

The twenty-seventh victory of the season made the Trojans the most winning girls’ basketball team in school history, which feels surreal to forward senior Alexis Parker.

“From the beginning of the season our coach has told us that we had the potential to do big things. We all started to see that we have a competitive edge and want to come together and continue moving on during every postseason game,” Parker said.

The future looks bright for a young Trojan team.
Three sophomores started against the Red Devils, with 11 underclassmen on the 15 man playoff roster.

A young roster is part of the excitement.

“Playing with a younger team has its challenges. It forces myself and the other seniors to step up and guide the younger players, but all of the younger girls have a great attitude and are very competitive, which helps the team as a whole,” Parker said.