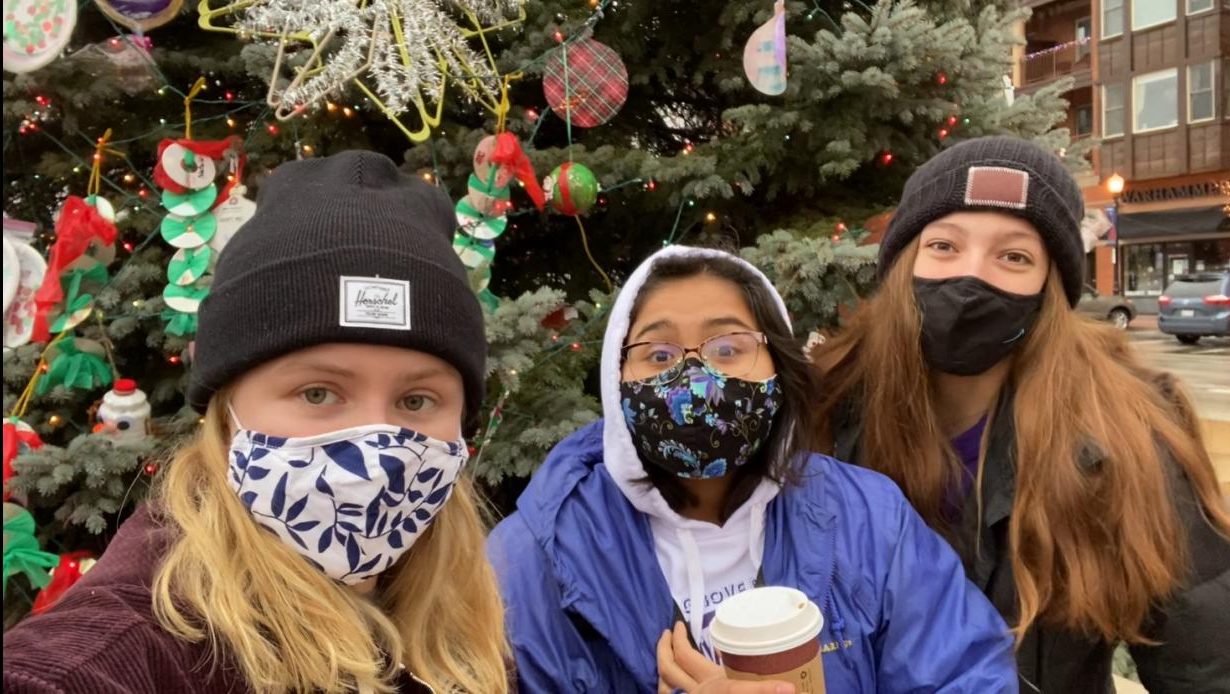 Starbucks is well known for its extensive holiday drinks and festive advertising, for one of their most popular seasonal drink is the Peppermint Mocha. We asked a barista for a recommendation of their favorite holiday beverage, choosing the minty drink. The first taste of the warm drink was extremely overwhelming, with an overbearing taste of peppermint taking over the initial review. However, soon after the mocha made itself clear, creating a perfect balance between a minty and chocolate taste. The Peppermint Mocha is a perfect representative of a holiday drink. Overall, we gave the drink an 8/10.

As we approached the doors leading into the local Peet’’s Coffee, we grew hesitant due to the last beverage we ordered ended up being underwhelming. However, we soon were proven wrong with the seasonal Holiday Spice Latte. The latte presented numerous pleasantly tasting spices along with a strong dark roasted coffee taste, with both contrasting flavors balancing each other. After we left the Peet’s, the latte still ranked high up on our list, delightfully changing our opinions on the coffee’s iconic rich and robust flavors. Overall, we gave this drink an 8.55/10.

Mud and Char catered to the demand for holiday flavored drinks through their exclusive limited menu, which included the Snickerdoodle Latte. The barista insisted that we try it since it has been a customer favorite ever since the drink was put onto the menu, and we were very happy with their recommendation. Mud and Char is known for their strong espresso and coffee and the Snickerdoodle Latte was no exception. The faint hint of snickerdoodle was hidden behind the robust coffee taste. If you’re in a festive mood and enjoy a strong savoriness of coffee, then Mud and Char’s seasonal menu is perfect for you. Overall we gave the drink a 7.5/10.

Driving into our local Dunkin’ Donuts drive-through, we were surprised to see a new menu item portrayed on the holiday menu, the Sugar Plum Macchiato. The sheer curiosity of the name was enough to order the fascinating drink but to add to the interest, the drink had a lavender color. The sweet taste of berry contrasting with a potent taste of espresso was definitely interesting, creating mixed reactions with every sip taken. However, as the berry milk mixed with the espresso, it created an overwhelmingly sour taste. Overall we gave the drink a 5/10.

The local Italian caffé’s added a long list of festive drinks to their menu. We settled on trying the Eggnog latte, for it was the most unique out of the selection. When we first tried the latte, we couldn’t believe that there was coffee within the drink. It tasted exactly like eggnog, only with a tiny punch of coffee. The Eggnog latte gave a nostalgic seasonal taste to those who don’t prefer the taste of espresso. Overall, we gave the drink an 8.59/10.

For an extra bonus drink, we decided to also test out Cafe Di Moda’s Cinnamon Apple Cider. Although this could be considered more of a fall drink, it did not disappoint. The strong caramel flavor was practically bursting out the drink as soon as we were handed it. The extra drizzle of caramel on top perfectly rounded out the hot apple cider. The cider itself was not too overly sweet but was still packed with the all-important apple flavor. Even though this was a last-minute decision to try this (an arguable fall) drink, we left feeling satisfied and warm with the memory of the fall. Overall, we gave this drink an 8/10.

Reviews are written by Amelia Carlson. Video filmed and edited by Olivia Shirk and Vanessa Lopez.