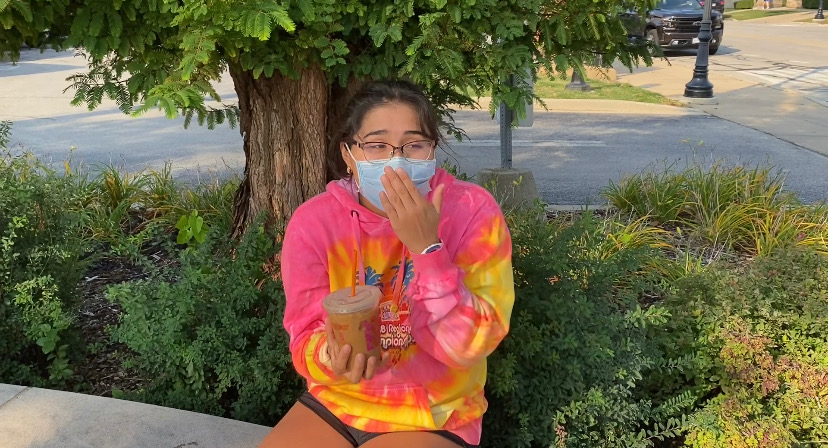 As the weather cools and our craving for seasonal fall flavors rises, many local coffee places cater to these needs by introducing limited menu items, of either tasty treats or indulging drinks. Since so many locations follow the same pattern, Editor-in-Chief Amelia Carlson and Sports Editor Vanessa Lopez decided to go to five coffee shops to see who ranks supreme in this month’s edition of Seasonal Selection.

Starbucks’ Iced Chai Tea Latte with Pumpkin Cold Foam: Starbucks has proved itself to be a front runner in which location has the best seasonal drink time and time again, for their Pumpkin Spice Latte is well known throughout the world during the fall months. But for this time around, we decided to take a new route and order something new, the Iced Chai Tea Latte with Pumpkin Cold Foam. This drink was recommended to us by a reader, and their judgment was definitely correct. The chai tea allowed us to get that seasonal taste we’ve been craving without the common punch of coffee in Starbucks’ regular drinks. And the added Pumpkin Cold Foam was the cherry-on-top. Overall, we gave the drink a 100/10, for it was one of the best we tried that day.

Dunkin’ Donuts’ Iced Pumpkin Latte with Oat Milk: For the second large chain of the day, we took on the powerhouse Dunkin’ Donuts. Recently, Dunkin’ Donuts added a large variety of pumpkin-flavored drinks for all the fall lovers, including the Iced Pumpkin Latte. Oat milk also made a new appearance, adding to the long list of alternatives to milk. The latte was more on the sweeter side for my liking, but the nostalgic taste of pumpkin spice warmed my whole body and left us craving more. Oat milk was also a great addition to the drink. Overall, we gave the drink an overall rating of 8/10.

Peet’s Maple Spice Cold Brew Iced Latte: As most chains are doing, Peet’s also had a small addition to the menu for the start of Fall, including the Maple Spice Cold Brew Latte. We chose the iced latte because of the unusually long title, and we were definitely surprised by the drink. Our initial thoughts were pleasant but soon were turned sour after an odd aftertaste emerged from the drink. For those who enjoy dark roast coffee and fall flavors, Peet’s seasonal drinks are for you! But unfortunately, we did not enjoy the iced latte as much as we thought we would. Overall, we gave the drink a 2/10.

Mud and Char’s Pumpkin Pie Cold Brew: Mud and Char’s exclusive menu added four new drinks to their selection, including the Pumpkin Pie Cold Brew. The name caught our attention and we were super excited to indulge in it. We were not disappointed. The drink came in with a beautiful presentation, with the cold brew contrasting the pumpkin pie flavored cold foam on top. The coffee had a strong punch but soon tasted like the pumpkin flavor that the drink advertised. If you enjoy strong coffee with a pumpkin touch, then this drink is perfect for you! Overall, we gave the drink a 7/10.