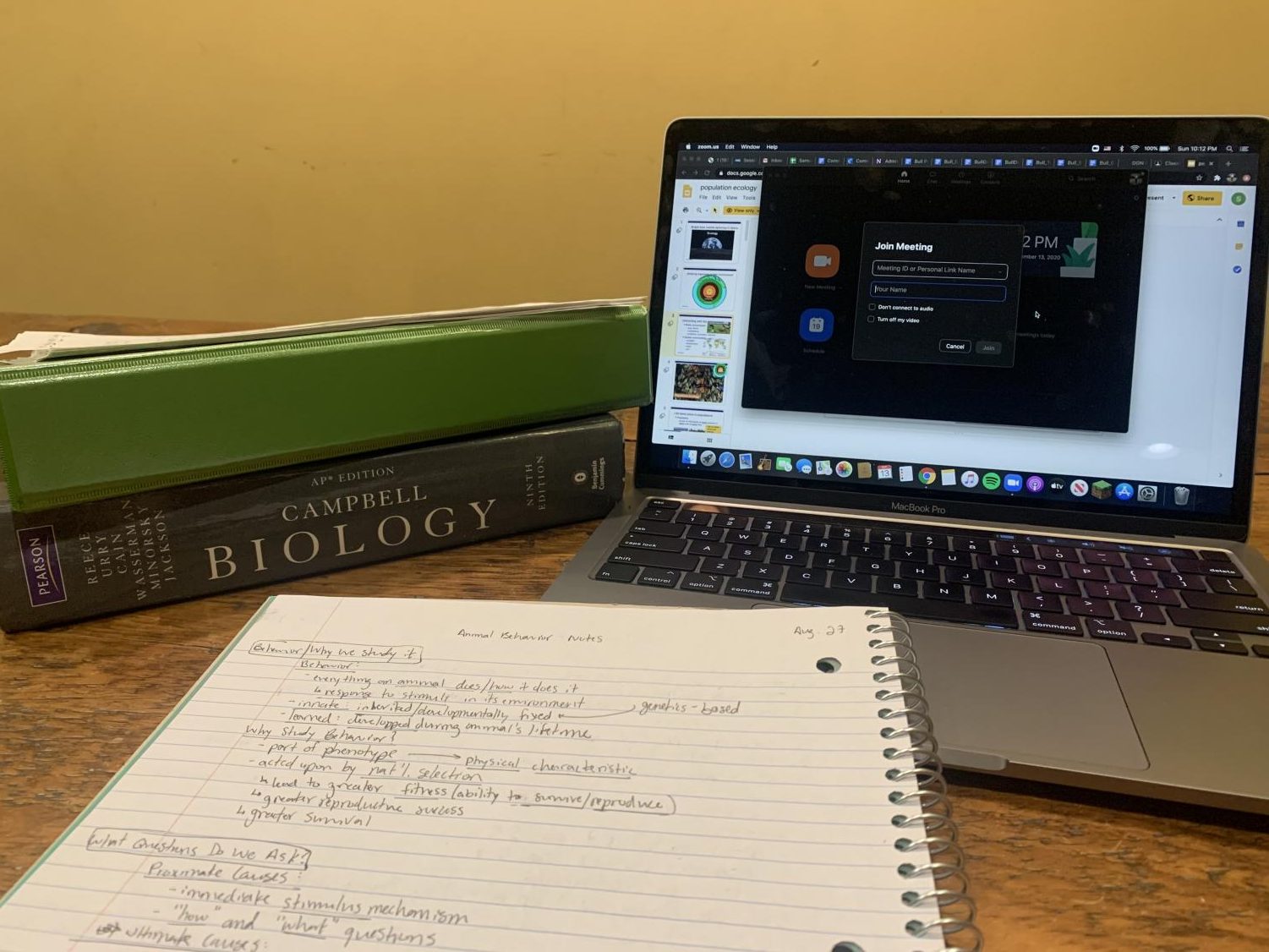 LEARNING FROM HOME: a staged photo mimicking a typical home set-up for a science course. (Photo by Sam Bull)

LEARNING FROM HOME: a staged photo mimicking a typical home set-up for a science course.

“For me, one of the saddest things is that I don’t get to see all of you in person. I like to tell jokes and interact, and that gets lost in this setting,” science teacher Jeffrey Grant says, gesturing at his computer. “Everybody is on mute, and I can barely see a lot of you. It’s hard to feed off each other in this setting, and it’s hard for you guys to feed off each other.”

Personal teacher-student connection: one of the most critical components of science curricula at DGN, and the element, in the eyes of teachers and students alike, that is most difficult to maintain and recreate in a remote setting.

“We use humor because that brings a class to life. We all know how to teach science, we all know scientific concepts, but what makes our team special is bringing that content to life, and that is through the dynamics of interpersonal relationships. You tell a joke on Zoom, and everyone just looks at you with straight faces,” science department chair and chemistry teacher Michael Heinz says with a laugh.

Although there is debate on the scale of its effects, it is widely agreed among experts that social interaction within the classroom enhances various aspects of learning. Education professor John Hattie’s 2009 meta-analysis of visible learning concluded that both student-teacher relationships and cooperative learning rank among the highest of positive student learning factors.

For senior Delaney Durbin, not connecting with classmates is difficult, but she believes the incentive to persist and make the best of the situation is strong, especially among seniors.

“If we were in person, it would be a lot easier to build off our relationships and make our learning more effective, but we’re all doing the best we can with what we have,” Durbin said. “I think that a lot of the classes I’m in are like that, because as a senior especially I think a lot of us have taken the time to say ‘listen, this is not what we wanted, this is not what we planned for, but it’s what we have, and we understand why we can’t go back so let’s just do the best we can.’”

Durbin is enrolled in science teacher Steven Ruffalo’s AP Environmental Science (APES) course this year. On Sept. 4, the class completed a simulation on Gizmos, a popular online lab simulator, and Durbin explained how the activity was an example of Ruffalo being flexible and experimental for the class to combat a lack of hands-on learning opportunities.

“It was a really fun hour-long simulation that took us through an environment where we had to fix things. He is working hard to find things like that, and he wanted our feedback… he was like: ‘if you don’t like it, I’ll find something else,’ which is really awesome, because that’s what you want from teachers right now,” Durbin said.

The APES course description states that “Field experiences and laboratory work are an integral and required part of the course and are highly analytical in nature,” which cannot be fully recreated in a remote environment.

“The opportunities are greatly reduced, and it does probably mean that these students as a whole have fewer opportunities to make those direct connections…” Ruffalo said. “One of my ideas is to have ‘Mr. R on the road,’ where I go and film some of the things that we would’ve done on our field trip to Lyman Woods, for example. That way they would at least see what I’m talking about first-hand…”

Teachers demonstrating assignments and activities for their classes has become a common occurrence for the science department this year. Grant has improvised his Principles of Biomedical Science (PBS) class’s CSI crime scene unit by walking through the steps for a visual example.

The goal of the unit is to use forensic science to solve certain crimes. Students have to go through the process of collecting evidence using fingerprints, polygraph tests, and hair samples. Senior Sean Lifka, a PBS student, explained exactly what Grant did to recreate the hands-on aspects of the unit.

“For the crime scene, we couldn’t be there in person to look at it, so Mr. Grant had to bring his laptop over there and ‘show’ us in-person and we had to try to figure out how to draw it from the pictures he took. That was kind of weird, but it ended up being okay,” Lifka said.

Principles of Biomedical Science is a course provided by Project Lead the Way, a career-oriented program focused on hands-on, applied learning techniques for certain STEM-related subjects. The program’s website provides content and virtual labs for the entire PBS course, easing the difficulty of learning remotely for that specific class.

Another way that science teachers, such as Research Topics in Earth Science teacher Lindsey Panopoulos, are adapting labs for the remote setting is having students work on them from home with household items.

“I’m trying to have the kids do some activities from home. Whatever involves normal household materials and items—even involving going outside. I’m just trying to have them do as much as they can on their own. The difference there is that they’re working alone instead of in a lab group,” Panopoulos said.

Another difficulty that the science department has faced this year is figuring out how to restructure the curriculum without removing essential content. Heinz explains that the department has had to adjust, but also that it has done a great job making the best of the situation.

“We just can’t get to as much material as we did in the past, but the material we’re getting to we want to make it as solid as possible… And then, the work that we’ve done with essential curricula, like what we want kids to get out of a biology class, chemistry class, physics class, and then our electives,” Heinz said. “Those are critical conversations that we’re having, and our teams have really done a great job of supporting each other and holding kids accountable in this endeavor.”

Heinz also elaborated on the specificity of courses, and how limited time and access to resources so far this year has inclined the department’s curriculum writers to move many of their classes towards an approach that emphasizes understanding of key elements and scientific methods, and away from one that focuses more on the small details of the subject.

“What they’ll do is they’ll say ‘Okay, this is the essential part. We can cut some [material] here—they’ll get this at some point in time in their science career—but what is it that we want to get to them that they’ll carry through?’” Heinz said.

Despite the difficulties of remote learning so far this fall, the science department has expressed general contentment with technology and the Internet as valuable tools to better the situation.

For Physics teacher Keith Dvorkin, technology has played a key role in the functionality of his classes.

“The technology has been really great, though. There are tools in the Google Suite of apps that we found late in the summer… there’s an app we just started using the week before school called Google Jamboard and it’s sort of just like a whiteboard,” Dvorkin said. “The fact that kids have Chromebooks. The fact that the school sent styluses home for kids to use. I feel the technology gives us a lot of the resources to do what we would be doing in a normal classroom.”

Dvorkin mentioned how there are many applications available for students that are accessible on Chromebooks, but that these cost money.

“Reproducing what goes on in a lab is not a simple task in a remote setting, but we’ve been exploring a tool that was put together for that from Vernier. However, it’s a subscription service so right now all the teachers are using a free trial version, and we’re looking for funding because we really like it and so we’ll see if we get it or not,” Dvorkin said.

Senior AP Biology student Syed Farhan explained how, while Zoom does present difficulties in terms of limiting the ability to connect with students, it also provides some normalcy in the form of being together with the entire class in one place.

“We haven’t really talked a ton with our classmates in breakout rooms besides when talking about a lab, and Zoom isn’t really equipped to handle individual conversations in the main session. So a lot of the time, you’re just kind of sitting there listening,” Farhan said. “Although, considering the circumstances, I think Zoom is one of the best ways to at least make it feel like we’re all in a classroom together since you’re able to see everyone.”

Through all the difficulties of remote learning, the science department remains confident and optimistic. Grant mentioned how, while remote learning is not what anyone would prefer, the supportive attitudes among staff, students, and parents has been key to getting everyone through these uncertain times.

“We’re really appreciative that the students are as involved as they are, and that the parents are super supportive as well. That ‘we’re all in this together’ attitude is paramount for you and me… As a community we’re pretty united,” Grant said.