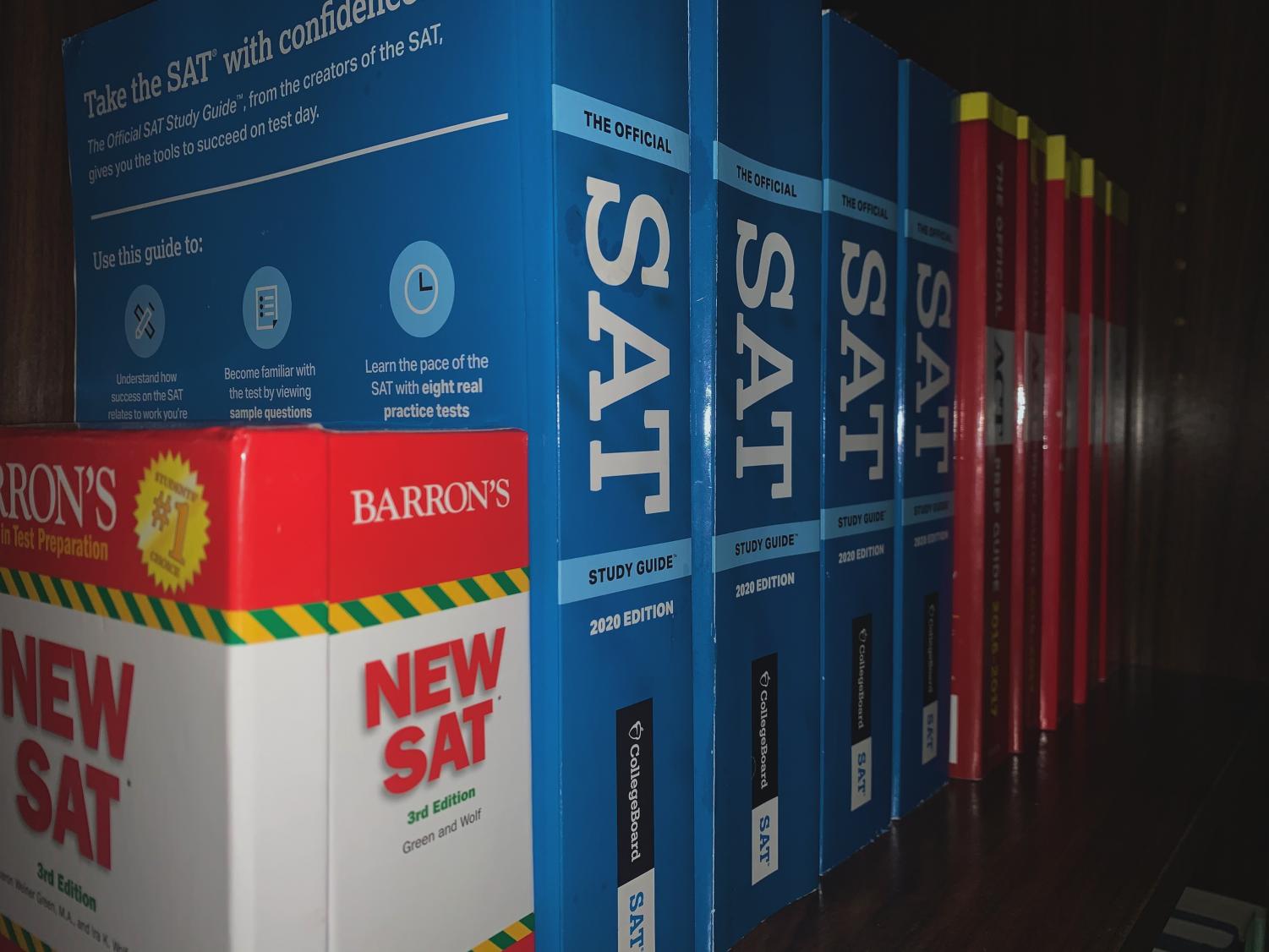 PRACTICE, PRACTICE, PRACTICE: a photo of SAT and ACT practice books, representing the only version of the tests that many students have been able to take in the last several months. (Photo by Sam Bull)

Traditionally, high school seniors would be spending their fall semester preparing and submitting college applications; however, the surge of closures and hindrances due to COVID-19’s spread across the nation over the past several months has left countless students scrambling to take standardized tests like the ACT and SAT.

With testing centers unable to accommodate some state’s strict guidelines for social distancing, these standardized tests were cancelled in mass. As a result, according to the NACAC, more than 400 colleges have decided to make submitting test scores optional for the 2021 graduates as of Aug. 7. However, not 100% of colleges are becoming test-optional, meaning that many students will still be required to submit standardized tests.

Colleges across the country are forced to make accommodations for students that have faced these challenges. Yet, other states that stayed open throughout the spring and summer were able to hold the tests. These particular students were able to take the test multiple times without having cancellations to worry about, posing an imbalance for students across the nation; some of whom were able to schedule their testing with generous guidelines compared to other states, like Illinois, who mandated strict social distancing guidelines.

Local ACT and SAT tutor Bryan Pyle has witnessed the dilemma of fairness first-hand, feeling that colleges still hold bias in applicants who provide a test.

“People who were able to take the test multiple times in states that did not shut down already have a leg up on the competition. Even though they are not requiring it, there is no way they can just throw it out. It tells a story about a students’ abilities. All things considered, if student A and student B are the same in all regards and one has a test score and one does not, you can make a better decision on the one who has it,” Pyle said

According to the College Board, ACT and SAT administrators have been able to get these tests running again. Yet many students are still not able to book a spot due to high demand. There is a compounded volume of students needing to take these tests because of the backlog of seniors as well as juniors who are now eligible and prepared to test.

Senior Charlie Ferris has experienced the test cancellations and issues of getting into the recent testing dates.

“There was a week where we would be on hold with the ACT administration for hours at a time. I was lucky to get in for testing before college applications are due in November, but I am sure that is not the case for everyone,” Ferris said.

Uncertainty looms for high school juniors moving into their senior year, until they start to see something change among many colleges and universities. These juniors are now pressed for time from the effects their senior counterparts endured.

Junior Natalia Greaney has been preparing for an ACT in October, but due to the seniors being prioritized, she is in a holding pattern for registration.

“It was frustrating. I was planning on taking it early this year and now it is really up in the air for when I could have this done. As of now it does not seem that I can get into any other dates except for early February, and I imagine that may be delayed too,” Greaney said.

The colleges that are test-optional have changed their direction this year regarding their student applicants. They will now have to put more focus into one’s GPA, course rigor, AP or honors classes, and outside extracurricular activities when making an evaluation of a student.

Senior Maddie Redpath, who plans to apply in November, thinks that these universities have handled this issue well.

“I think colleges are doing what they need to with not requiring these tests. Obviously this can be an advantage towards people that have strong academics, but are weaker in testing. But everything aside, I don’t think that colleges necessarily need the ACT to determine whether or not the student is capable of getting in,” Redpath stated.

Students have been questioning their abilities to receive certain scholarships without the submission of an ACT or SAT. Some universities are looking into offering merit-based scholarships that are available to ones who have not presented a test score.

Colleges are adjusting expectations and requirements. Because of this, some anticipate a greater class size than normal. Specifically, the University of Tennesse is having a similar experience.

Regional recruiter of UT Peter Saenz stated that “We’ve also enrolled larger classes as a result.  We’re looking for students that we believe can be academically successful at the University.”

Although there are many loose ends, colleges are developing and ensuring that the application process is adjusted to the conditions as possible. This year’s senior class will be sending out applications under an unprecedented set of circumstances. Time will tell if these trends will continue.