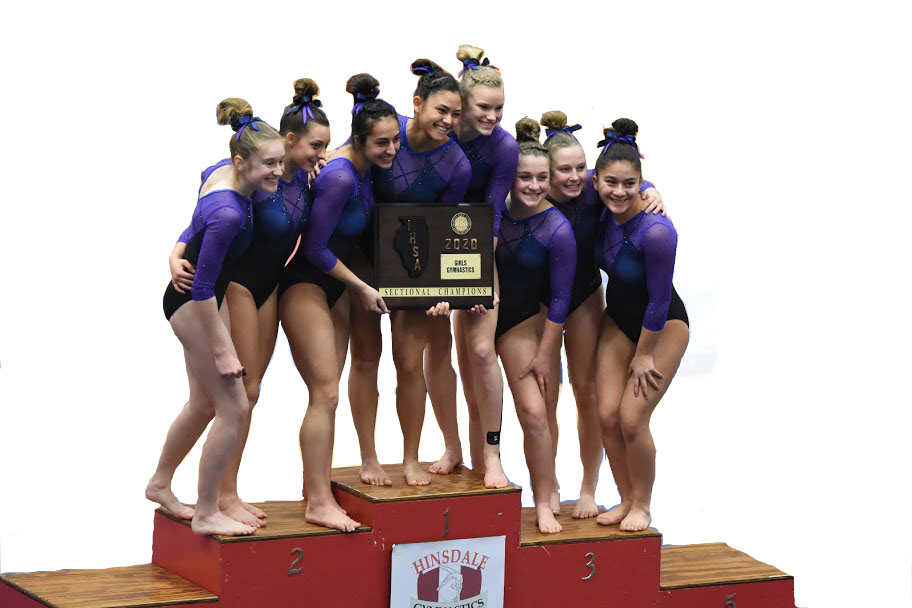 ONE TEAM ONE DREAM: The ‘Trostangs’ pose atop the podium following a first place finish at Sectionals Feb. 02. (Photo courtesy of Mia Bowers )

ONE TEAM ONE DREAM: The ‘Trostangs’ pose atop the podium following a first place finish at Sectionals Feb. 02.

In its first season as a combined team, the girls’ gymnastics co-op program with DGS placed seventh in State, picking up Regional and Sectional titles along the way. The ‘Trostangs’ posted a team high score of 144.075 at the Sectional meet.

The news that the team would co-op with DGS did not sit well with DGN gymnast junior Gabby Stellato, who has competed on DGN’s varsity team since her freshman year.

“Initially, I was not happy about [the co-op]. I knew that when we would co-op it would consist of a lot of people getting cut,” Stellato said.

No cuts were made from the JV team, with 17 athletes initially rostered. The varsity team consisted of 10 athletes, five from each school. Stellato felt that DGN’s varsity gymnasts settled in quickly, which she discussed before the Sectional meet.

“For varsity [the transition] went really well. It helped us because now we have a good chance at making it to State as a team. The transition was really nice, I like the coaches, I think everyone is enjoying it,” Stellato said.

Last year’s DGN team finished the regular season with a high score of 139.550 in comparison to the co-op’s undefeated record and 144.075 high score.

“We did good last year for what conference we were in and who we had on our team, but transitioning gave us alot more depth,” Stellato said. “We got so much depth with the people because on our varsity last year, for example, we had like two girls that flipped to vault. All of our girls flipped to vault this year.”

Major contributors to the team’s Sectional title hail from both sides of town, with DGS’s junior Melina Pipilas and freshman Kate Snouffer, and DGN junior Mia Bowers leading the ‘Trostangs’.

Bowers placed 4th on vault, uneven bars, and floor at Sectionals. She attributes much of her success this season to a new emphasis on how she carries herself.

“I’ve worked a lot on confidence. I’ve never really thought about that before but that’s a big thing that my coach is helping me with because it just makes you perform a lot better,” Bowers said. “Especially on beam, even if it’s faked a little bit, you have to show confidence. That kind of intimidates the other gymnasts when you show that.”

Snouffer placed first on floor at Sectionals, beating second place Lincoln-Way East by two-tenths.
She, like Bowers, emphasized her mentality.

“My expectations for myself were mostly mental based. I wanted to keep confidence throughout the whole meet and make sure that it stayed that way too. I think my confidence levels staying high were what kept me successful,” Snouffer said.

Head coach Kristyn Campos felt that the team did just what they were expected to do at the Sectional meet.
“The expectation was to do routines we were proud of and work together as a team. They all did that,” Campos said.

Stellato feels that the extra push is what brought the team to the next level.

The season ended with a seventh place finish at the State competition. DGN athletic director Denise Kavanaugh expects that program will remain co-oped for the 2020-2021 season, returning to an exclusively DGN team in the 2021-2022 season pending coaching staff and student interest.