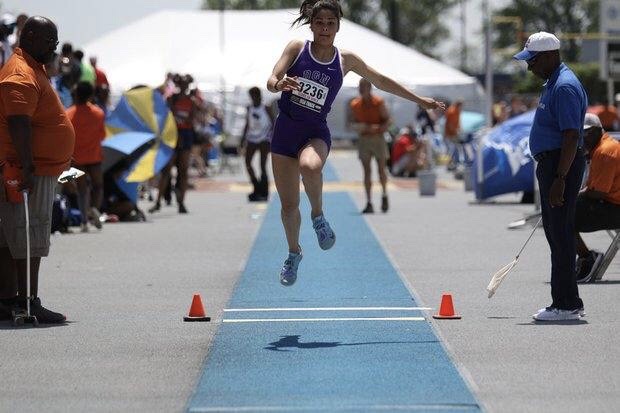 At the Glenbard West triangular meet Feb. 15, junior McKenna Cinotte kicked off her track season by breaking the indoor school record in the triple jump. On her first out of three attempts, she tied the mark of 38’0” (38 feet) set by Isabel Maletich in 2018, before jumping 38’4” (38 feet and 4 inches) on her final jump of the day.

“Going into the meet, I wasn’t really sure what to expect. I was honestly just going for 36 feet, which is kinda near the state standard,” Cinotte said. “Beating the record at the first meet without the adrenaline kicking in like it would at the higher meets really helped my confidence.”

Cinotte placed 6th with a mark of 38’2” at the IHSA 3A Girls’ Track State Meet at Eastern Illinois University during her sophomore year, which was her previous personal record. And when she first started jumping as a freshman, Cinotte had no idea she would come this far.

“I made a deal with my friend that I would do track with her if she did something for me,” Cinotte said. “It’s never a sport I thought I would do, and it’s really weird that it’s become my new passion and something I want to succeed in.”

“She came out and she really executed, and did a wonderful job with it,” Maletich said. “And I think it’s a testament to her that she was focused and driven. She’s really been waiting since last season to get out there and jump again.”

Cinotte says the jump which broke the record is her lifetime PR (personal record), and is additionally looking to build on her sophomore year state performance. Current triple jump rankings have Cinotte’s Feb. 15 mark of 38’4” ranked fourth in the state for the indoor season, and she hopes to hit 39’0” by the end of the season.

“She’s doing a lot of things the right way, and it’s really encouraging,” Maletich said. “It isn’t like you just saw an extra pop in her that day, she just looked like she was doing it right and going with her training.”