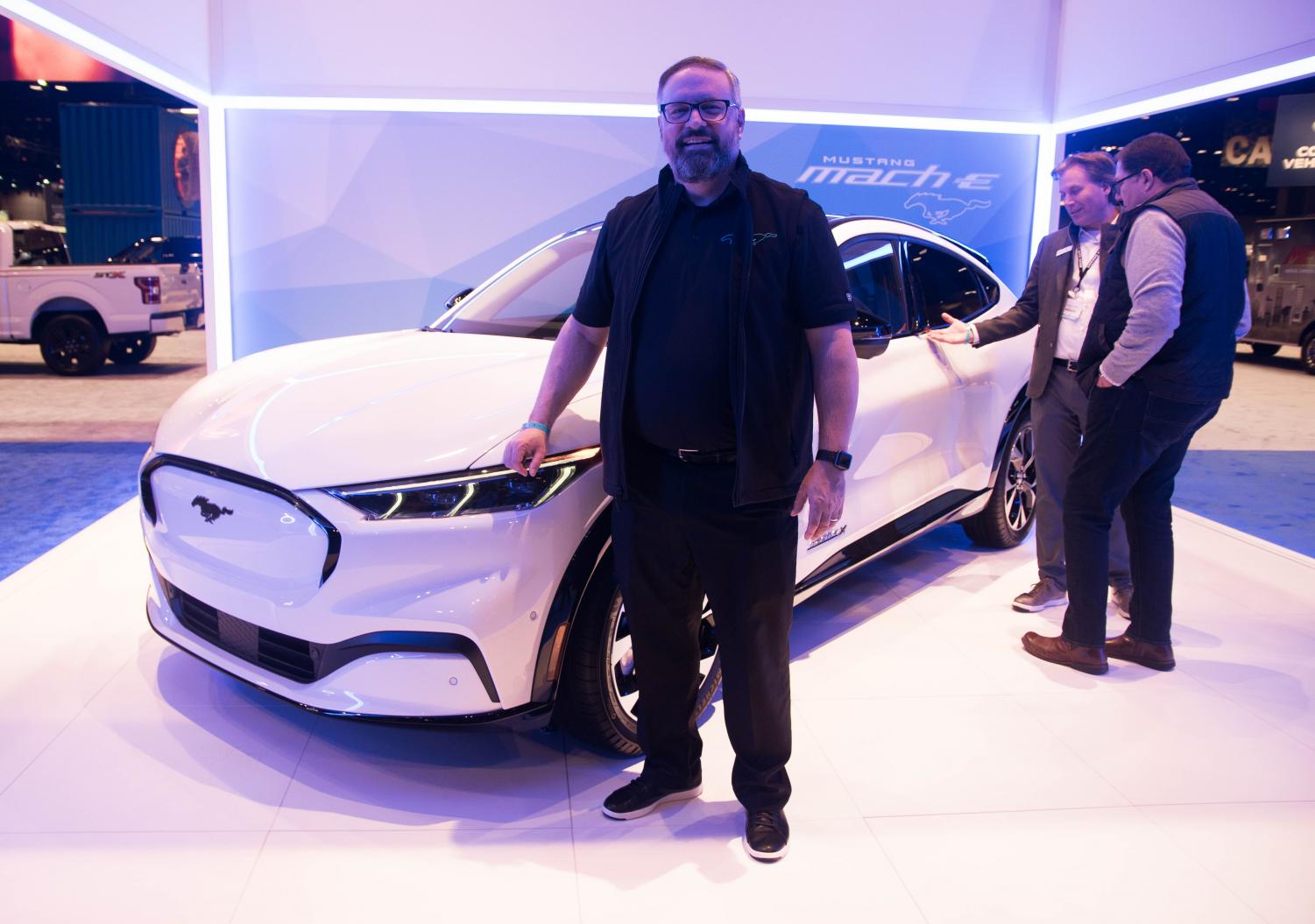 MACH-E MASTERMIND: Ford Marketing Manager and Electrification Marketing Strategist Jason Mase poses next to the new Mustang Mach-E at the Chicago Auto Show Feb. 6 as other journalists check out the car for the first time.

MACH-E MASTERMIND: Ford Marketing Manager and Electrification Marketing Strategist Jason Mase poses next to the new Mustang Mach-E at the Chicago Auto Show Feb. 6 as other journalists check out the car for the first time.

Detroit-based Ford Motor Company showed off a new $250,000 Liquid Carbon Fiber option on their GT supercar for the very first time, and presented the all-electric Mustang Mach-E SUV for its official Midwest debut at the Chicago Auto Show, held at McCormick Place.

While the GT was well-received at the Feb. 6 media event, the Mustang Mach-E met mixed opinions because of its engine and body style. Ford Marketing Manager and Electrification Marketing Strategist Jason Mase acknowledges the controversy surrounding an electric Mustang SUV, but believes consumers will eventually put those arguments in the rear-view mirror.

“We knew people were gonna be pretty upset. They’ll say ‘my Mustang is a 2-door, gas-powered coupe or convertible. That’s a Mustang,’” Mase said during an Omega interview. “But then we said to them ‘what if we could give you something that still looks like a Mustang and has the performance of a Mustang, but has five seats and is better for the environment?’ And then we saw people who initially had their arms crossed kinda think about it a little more, look at it, and say ‘yes I might actually drive that.’”

This is the first time Ford has ever put the Mustang badge, which has a long history of being one of the best sports cars on the market, on an SUV, let alone a plug-in electric car. However, Mase believes it was the right move, citing data collected by Ford over the past several years showing approximately 70% of all first-time Mustang owners will buy an SUV when the time comes for their next car purchase. With this statistic in mind, the team behind the Mach-E set out to create an entirely unique model which offers up the same driving fun in a more eco-friendly package.

As a full-electric, the standard powertrain option will be a battery that lasts 230 miles on a single charge, less than the industry average. A 300-mile battery is also available if customers opt to pay for the extended-range version.

“We could have done something that had maximum range that wasn’t a lot of fun to drive, but that wouldn’t be very cool,” Mase said. “The acceleration is basically the same as the GT500 [fastest Mustang coupe] and that’s one way to have fun, which we think is vital to the success of this car. We wanted to have fun with it. We didn’t want it to be a toaster [boring car] or a compliance play.”

In an effort to keep up with the likes of Tesla and other established names in the electric car market, Ford has ensured that the Mach-E will be compatible with the nationwide network of DC Fast Charging stations.

“You can stop off for 10 minutes and get a soda or coffee, come back, and within that time period 47 miles of range can be added back to the battery,” Mase said.

Current estimates suggest that the Mustang Mach-E will be available in Ford dealerships across the country in the fourth quarter of this year, with prices starting at just under $45,000 for the base 230-mile version. This is about on par with the upcoming Tesla Model Y, priced tentatively at $39,000, which Ford identified as the main competitor for the Mach-E.

Mase added that there is a federal tax credit of up to $7,500 that he believes most buyers will qualify for.

“[The Mach-E is] definitely not for everyone, I will say that. And I also know it’s a very passionate topic, which we feel blessed to have, because there could very well be no one talking about it, and then it would be irrelevant,” Mase said. “It’s relevant, it’s fun to talk about, it’s fun and fast to drive, and I think a lot of those Mustang owners will have second thoughts, and maybe even add one to the garage.”