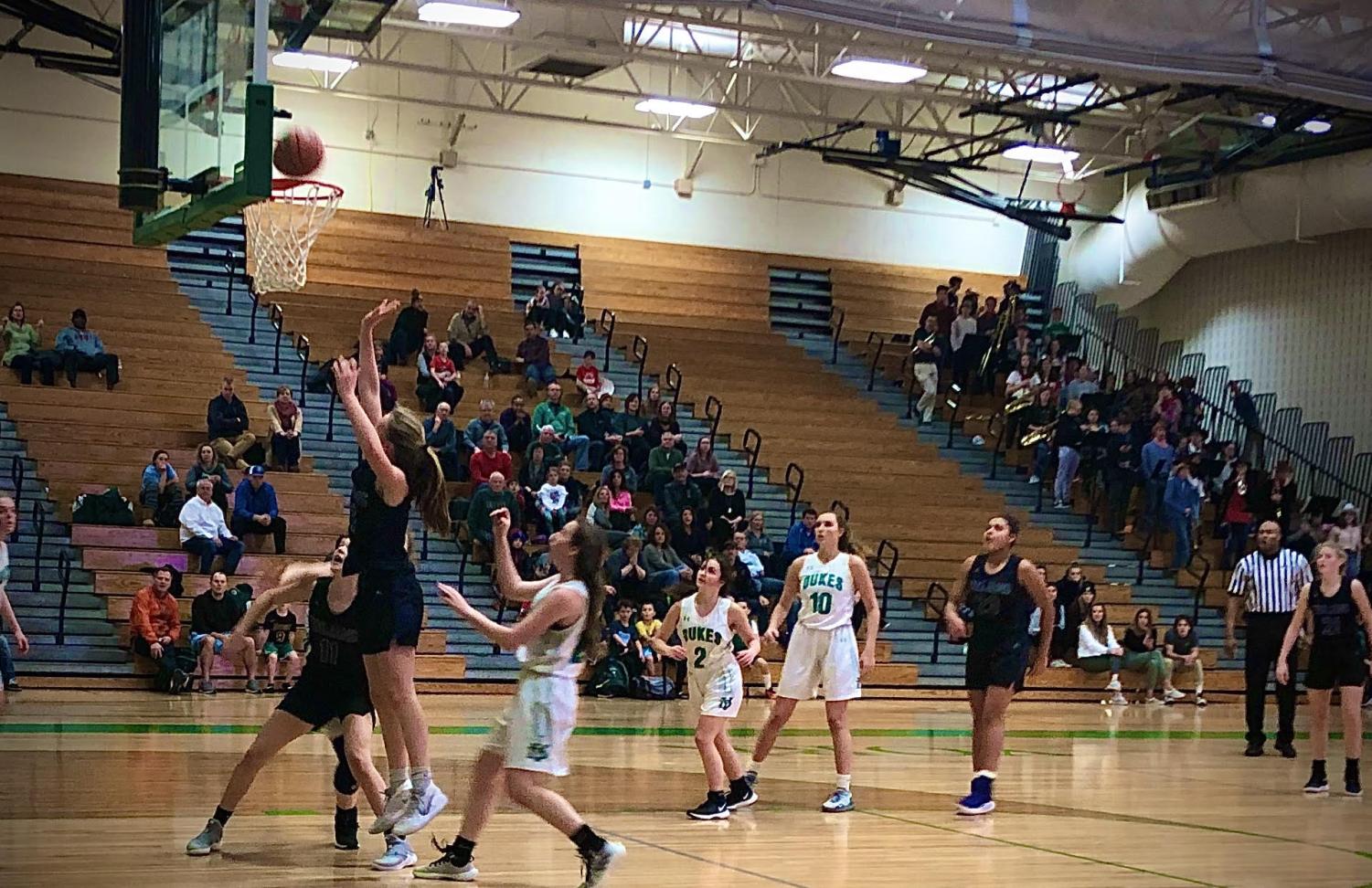 Girls’ Basketball beats York on the road, ties for first in Conference

The Trojan girls’ basketball team won its last conference title in 2014. Six years and a fresh group of faces later, the rankings suggest a possible repeat.

Last Friday’s 37-29 win over York knotted the Trojans and the Dukes for first place in conference standings with records of 5-1.

“[York] will try to speed us up and turn us over. They’ll try to get us to go up and down the floor and make it a fast break turn over type situation for us,” Bolt said. “If we can keep our composure, especially with a young group, we’ll give ourselves a good chance.”

Bolt’s prediction was spot on. The Trojans remained relatively in control throughout the first half, with the scoreboard reading 19-11 Trojans at the end of the second quarter. The Dukes came out hot in the third, speeding up the game with high pressure defense.

“I think they tried to initiate [a change of pace]. I think that plays to their advantage and they got us there a little bit early [in the second half] because we’re not really comfortable playing at that pace,” Bolt said. “That’s where we had some ill advised turnovers and they made a little run to cut the lead down.”

After a few minutes of turnover-layup play on both sides of the court, sophomore Ella Sebek came up with a momentum shifting steal in the final minute of the third. The Trojans’ lead was cut to 6 points heading into the fourth quarter.

The Trojans ran away with it late in the fourth with baskets from sophomore Ryann Wendt and free throws from sophomore Kate Gross. Freshman Maggie Fleming poured in a layup assisted by senior Alexis Parker.

Fleming began the season at the sophomore level, but was brought up to varsity during the Bill Neibch Falcon Classic. In her third game at the varsity level, she feels that the transition has gone smoothly.

“Honestly I thought [the transition] was going to go a little bit rougher than it has gone, but so far I feel like I’ve been able to keep up with the flow of things and just play my game,” Fleming said.

Senior Ellie Gross put up 13 points against the Dukes. Gross is a veteran to the varsity level and a clear leader and stand out on the floor. She’s impressed with the maturity of this year’s underclassmen.

“I think our young players are awesome. I mean they play like seniors, they keep their heads,” Gross said. “In a tough game like that on the road environment usually your younger kids can struggle, but every underclassman on our team does amazing under pressure.”

The Trojans look to the back half of their schedule in the coming weeks starting at Lyons Township Tuesday Jan. 14. The team is in a solid spot and anticipates an exciting end to the season.