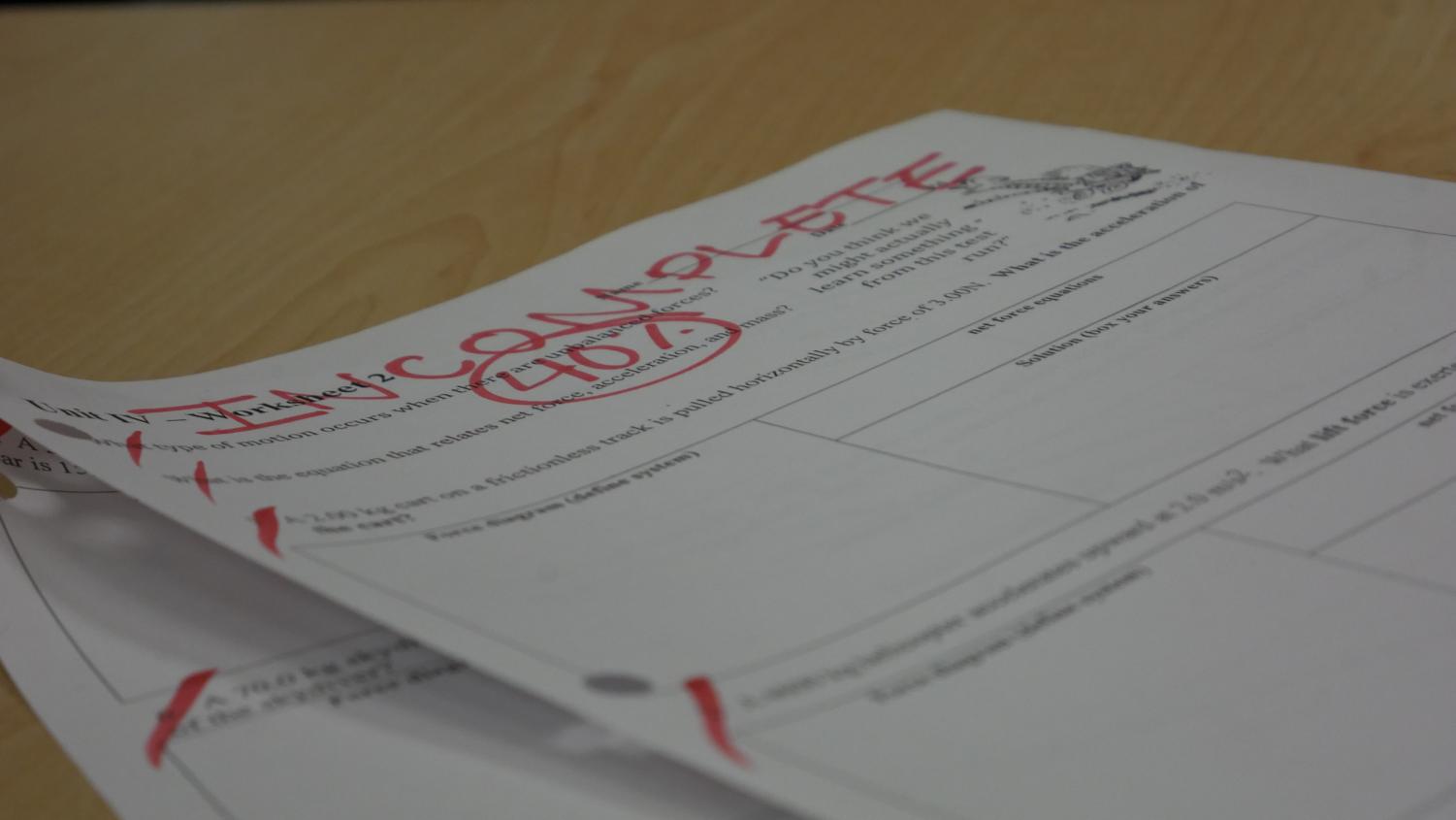 INCOMPLETE: An example of how a student’s homework may look if they recieve a Z4 . (Photo Illustration by Nolen Stevens)

INCOMPLETE: An example of how a student’s homework may look if they recieve a Z4 .

Starting during the 2020-2021 school year, all classrooms will be adopting the Z4 rule for grading, meaning that the lowest grade possible for any assignment, including missing or incomplete work, will become a 40%.
The rule is intended to cushion the blow of a zero on a grade, which as it stands, can and do cripple the grades of many students irreversibly. With a minimum grade of 40%, mistakes early on are more easily fixable by hard work later in the semester.
Several English classrooms are currently piloting the Z4 program, including Britni Mitchell, a general-level English teacher.
“I think, numerically, and visually, it is less devastating for a student who is in a crisis, and then looks and sees all of these zeros or Zs that they know are essentially irrecoverable. And rather than seeing those and being less motivated, a student can see a Z4 and maybe see some redemption,” Mitchell said.
Some worry that Z4 may instil a bad mindset and false expectations regarding post-secondary education and beyond, or that it may lower students’ accountability.
“If they don’t do what they need to do, regardless of the struggles they face, they will end up failing. But if they work hard, they can do so much in life. I think turning to the Z4 policy takes away that lesson they can learn in school,” Senior Gina LaMontagna said.
“I feel like it’s even like giving them an easy way out, and even though they may have to work a little harder because things are hard for them, it’s better than them thinking that people will go easy on them out in the real world,” LaMontagna said.
However, it is not necessarily realistic either to have one or two small mistakes to have massive ramifications throughout life after high school, like how a zero can drag a student’s grade down for a whole semester.
“When someone doesn’t do something in their job, typically, they’re not given a zero but they’re not fired right away,” English Department Chair Christopher Bronke said. “Life is about working with others to create and produce meaningful experiences, and I don’t think any grading scale should get in the way of that.”
The value of homework and smaller assignments the Z4 would be applied to is not limited to their effect on the gradebook, and in many ways the completion of those assignments are just as important as ever.
“My greater assignments are largely related to those little bits and pieces. So, okay, you may be getting a 40% average on your homework, but then when that greater conceptual piece is due, and it, say, worth 100 points, and you haven’t mastered those conceptual frameworks, then you are going to significantly hurt when it comes to the greater assessment,” Mitchell said.
“There is logic behind a student saying, ‘This isn’t important, I’m not gonna do it,’ if the word ‘important’ is tied to the learning derived from that assignment. If the word ‘importance’ is assigned to a point value, I would say that’s on the teacher, not the student,” Bronke said.
According to Bronke, this form of grading relies on a desire to learn and culpability in the student, but also on the teacher to attach meaning to the things they assign, a meaning that relates back to just a point value.
“If a student is saying, ‘This assignment doesn’t matter,’ and that’s followed up with ‘because it’s not worth enough points to matter,’ there’s a flaw in the way that the teacher is assigning work that as a grade attached to it,” Bronke said.
Z4 has been the subject of some controversy around parents and teachers. Some argue that by giving points for not doing any work, Z4 is enabling for students to not do any work at all.
“I do think that in the moment it can be helpful for a kid who’s going through a lot of things. That redemption. Long-term, if it’s just someone who’s kina riding the wave of the Z4, it’s extremely detrimental. Because you’re in the habit of getting something for doing nothing,” Mitchell said.
In terms of “getting something for doing nothing,” Bronke has a different way of seeing it.
“Conceptually, what we are doing is we are not giving a 40% by giving a Z4. The Z4 is the zero. What we’ve done is we’ve shifted from a 100 point grading scale to a 60 point grading scale,” Bronke said
When seen this way, while there aren’t any meaningful points being given to assignments, the blow of a zero has been substantially lessened, so as to give students a “second chance” of sorts after making detrimental mistakes early on.
“There’s 10% increments for every other variation, and then all the sudden we have a 59% increment to reflect degrees of failure,” Bronke said. “When I’m thinking about what I want a grade to measure, ultimately I want it to be as true and pure of a reflection of what a student can do, or known as possible. And I think a zero in the gradebook distorts that.”