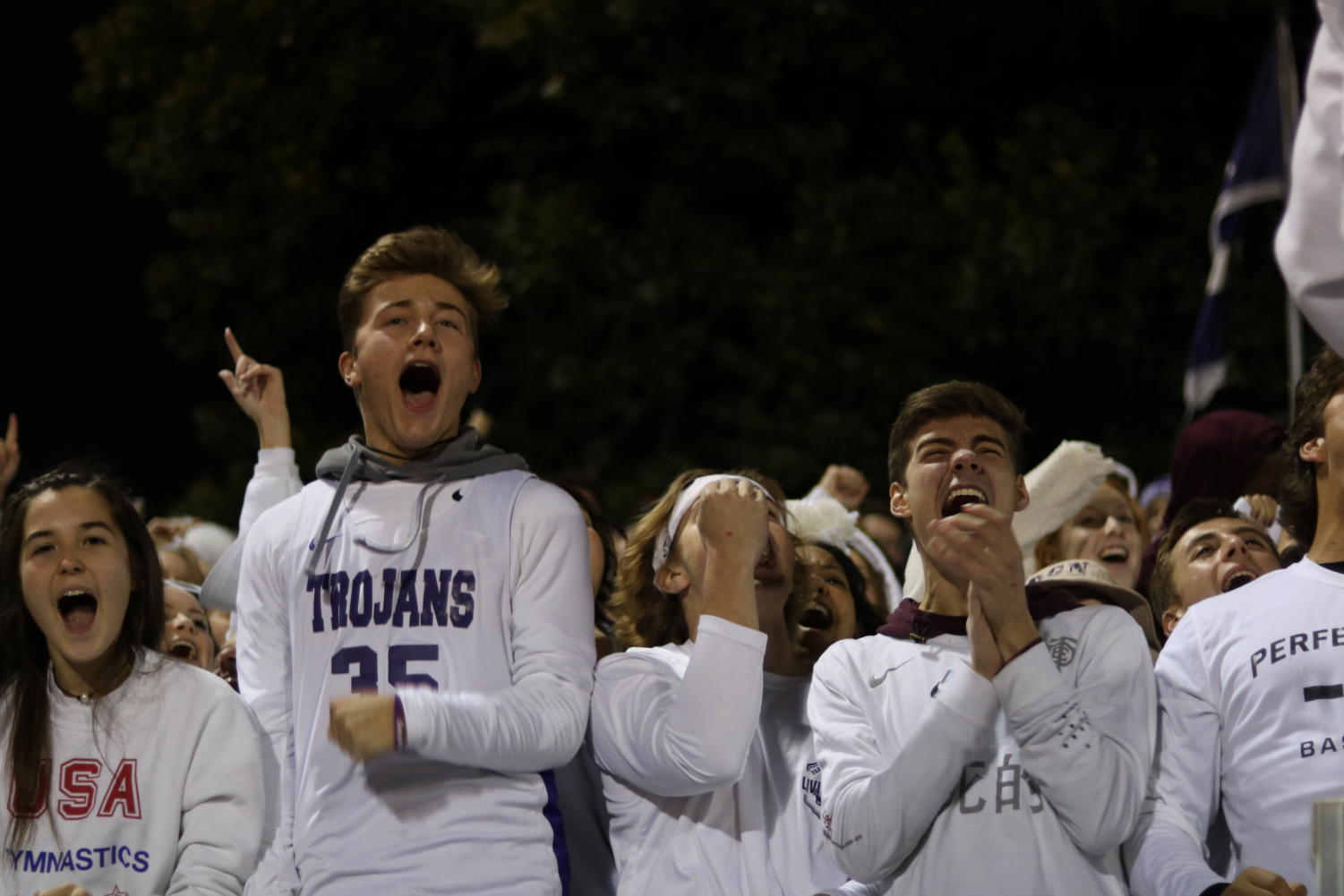 GETTING HYPED: Trey Kaiser (12), Jake Giarratano (12), and the N-zone cheer on the football team after a touchdown Oct 4. (Photo by Gavin Crowson)

GETTING HYPED: Trey Kaiser (12), Jake Giarratano (12), and the N-zone cheer on the football team after a touchdown Oct 4.

School spirit: how and why supporting our school has changed

In 2009, then assistant football coach Mark Mirandola and  basketball coach James Thomas, eager to enhance the school’s spirited environment at athletic events and the school in general, created the N-zone. Fast forward ten years, and on top of many changes revolving around spirit, the timeless question of how spirited the school is remains.

N-zone itself is defined on the school’s website as “a student-centered organization that will facilitate the resurgence of school pride and enhance the overall climate at Downers Grove North. Members of the N-zone support varsity athletics by spreading enthusiasm in school and establishing a positive, energetic student section at athletic contests.”

While Mirandola sponsors the club, it is mainly run by students, usually seniors, who plan the themes and events themselves. Mirandola describes N-zone’s purpose as uniting the student body and supporting all groups.

“The goal for the N-zone is always to support all these different groups of students throughout the building. It’s about how to support all teams and all things going on, whether it’s plays or concerts or whatever it is. That’s always the goal.”

“We just try to make sure that everyone comes and has fun at games,” Cook said. “We want everyone to feel as they are a part of one school and one student section altogether.”

Cook also believes that this year has been the most spirited year at DGN in a long time, much to the credit of the class of 2020.

“I think this year has been a lot more spirited than last year. I don’t kn

ow if it’s just our grade but I think this is the craziest student section that there’s ever been,” Cook said.

Principal Janice Schwarze also believes that there have been aspects of this year, such as the consistency of energy, that could suggest spirit is on the incline.

“I’ve been here for many different classes, and there have been pockets of spirit in the past when, for example, the girls’ soccer and volleyball teams made it to state, but [this year] I feel like there’s been a sustained spirit,” Schwarze said.

Several social media accounts promote athletics and school spirit—with the two most followed being @dgnbarstool and @dgnzone. The accounts have around 1,100 and 500 followers, respectively, and work to spread awareness about game times and themes.

The followers of these accounts immediately gain access to information about themes and events that they would otherwise need to do further investigating to find out.

Recently, traditions like the homecoming assembly and the celebration in the underground track after a home win are amplified by the rise of social media as a tool to share memorable moments.

Most notably, an Instagram account under the username @slocheofficial reposted several videos sent in by various students, each gaining thousands of views. These videos spread the energy and spirit of DGN into the larger influential sphere that social media encompasses.

At the time of writing, the account has roughly 16,300 followers and has reposted five videos of DGN either at assemblies, on Friday nights at football games, or at local Mexican restaurant Los Burritos Tapatios. The five videos have a total of 40,749 views.

There is also a clear argument that DGN school spirit is on the decline. Of course, due to a lack of ability to empirically measure spirit as a statistic, the

Special Services teacher and 2006 DGN graduate Kimberly Hartsfield described what happened during the now-defunct Spirit Week and the level of spirit present in that time.

“There would be different dress-up days during the week but Friday was the big day to wear your class color. We’d go all decked out. We’d be at the Hobby Lobby getting red shirts and ironing on letters, each group of friends would make a theme, it was great,” Hartsfield said.

While Hartsfield explained how spirit week got out of hand in some ways (such as when seniors would use ketchup to spray other students in the hallways), she argued that most of those incidents simply contributed to the cliché high school experience.

“I understand the ketchup being out of hand. We all meant well, but of course [a lot of teachers] called it bullying. No one saw it like that, no one was trying to harm anyone, it was just kind of a rite of passage,” Hartsfield said.

After the 2005/06 school year, then principal Maria Ward shut down spirit week, and it has not returned since. The cause of the shutdown is rumored to be due to a senior spray-painting an old gazebo in front of the Prince Street entrance completely red.

In a 2007 Omega article, then principal Ward was quoted from her “Letter to Parents” that “the competition between and among classes, and the ‘class colors’ day, in particular, necessarily promote some students being harmed, hurt, or ‘losing.’”

Specific traditions like penny wars, pop tab wars, decorating the cafeteria, and Class Colors Day were all cancelled with the aims of reducing competition.

The end-of-the-week spirit assembly was also pushed from Friday to Monday in 2007, but negative backlash from the student body ultimately contributed to the entire spirit assembly being shut down.

Hartsfield considers the rise in cell phone and social media, and the ways this limits real-life communication, as the main reason school spirit is on the decline.

“During passing periods we used to talk to our friends and everything. No one passes notes or anything anymore, everyone’s just glued to their phones, headphones in, listening to music,” Hartsfield said.

Continuing to regard cell phones and social media as a negative, Hartsfield explained how spirit is not as universal at DGN anymore.

“We used to all dress up for homecoming week, we’d have more chanting and cheers at the assemblies, it’s very dull now. People think it’s not cool because they’re scared of being filmed or whatever,” Hartsfield said.

While some aspects of spirit are debatable, there is undeniable data to aid arguments like Hartsfield’s that cell phone and social media use does have negative effects on teenagers.

A study by Monitoring the Future states that, since the first iPhone release in 2007, rates of sleep, sex, dating, urge to get a license, and hanging out with friends have dropped, while rates of depression, suicide, and loneliness have increased. Such statistics suggest that students at any school, not just DGN, might be less inclined to be ‘spirited’ in general.

Principal Schwarze also did explain that those who are introverted or do not have someone to go with may feel less inclined to participate in the high-energy components of school spirit.

“If you don’t have somebody to go to the game with, you might feel intimidated because it’s a large group, so I think we need to try and foster an environment where people can come by themselves and still be included,” Schwarze said.

Perhaps to the benefit of future N-zone participants, the west bleachers of Carstens’ Field were taken down Oct. 28 and will be rebuilt with a $4.5 million budget as a part of Phase B of DGN’s master facility renovation plan.

The renovation includes changes to both the home and visitor bleachers of Carstens Field. According to Supervisor of Buildings

and Grounds Michelle Cannan, both sets of bleachers will be enlarged, with the west bleachers set to seat 2,474 and the east 840. Squad rooms and storage will be built beneath the home bleachers.

The bleachers are projected to be finished by graduation and the squad rooms finished by the beginning of the 2020/21 school year.

Despite all the changes and energy centered around athletics, Schwarze believes that spirit can also be partly related to involvement in events like those of fine arts, as well as the overall sense of community at DGN.

“I wish more students would go to our plays because I think they’re amazing,” Schwarze said. “I think that there are people who are really into theatre and band and things like that. For students to have a really great high school experience they should be involved in something.”

It is nearly impossible to argue if one year is better than the previous or the next in the terms of something that cannot be fully statistically measured. Seniors of one year will often regard that year as more spirited than those before, because they are the ones that are a key part of that current year’s experience.

Controversy regarding social media’s role in spirit—whether it positively or negatively effects the camaraderie and energy of DGN and this entire generation of teenagers—will likely continue as cell phones continue to be apart of our lives.

Whether or not school spirit is higher this year comparatively to past years, it is always regarded as a pivotal way to unite the school. Cook explained how spirit, in whatever form it may be, can help bring the school and entire community together by making the student body feel like a family.

“I think high school experiences are what you make of it. So, if basketball and football games aren’t your thing that’s alright, but if you’ve never tried going you might as well come and try it out,” Cook said. “When everybody’s together, it’s like a community. It’s a family—it’s one big Downers Grove North family.”