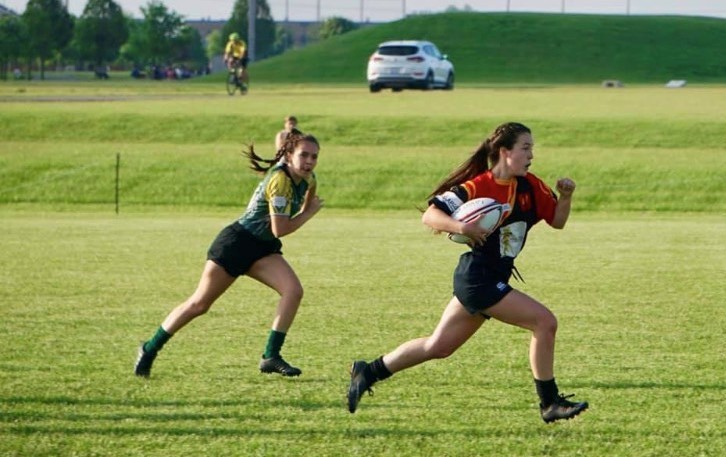 MAKING A MOVE: Elisabeth Delegan (12) rushes out of reach of a defender.

Senior Brady Moore plays rugby in the spring, but can also be found on the Trojan’s offensive line in the fall. Moore started playing rugby already having experience with football, so he was prepared for the high contact nature of the sport. Football didn’t prepare him, however, for rugby’s nonstop play.

“Rugby never really stops. The play keeps going, whereas with football after each play you stop, you huddle up, and then you go back and do it again,” Moore said. “Rugby is continuous, and it’s much more tiring because you don’t get to leave the field.”

Another difference Moore noted was the types of injuries sustained during a rugby match.

“In rugby, you’re more likely to break a bone or dislocate a shoulder or something like that because you’re tackling without shoulder pads. But there’s not as many head injuries in rugby as there are in football, because in football you hit head to head on like every play,” Moore said.

Moore also enjoys the international element of the sport, which he notices in the sounds of the game.

“In rugby [having an accent is] a lot more common because most of the good rugby players do not come from America, so a lot of the coaches of different teams will have an accent, and the best players have an accent,” Moore said.

Senior Elisabeth Delegan started playing rugby last year. Her experience was almost the opposite of Moore’s. Having played basketball and soccer, she was prepared to run, but the contact aspect was new.

“I was already used to all the cardio that was done in both soccer and basketball and now rugby because that was a main part of the game,” Delegan said, “ Rugby was almost a mix between the two sports that I just had to try to get used to and then learn the rules.”

Delegan caught on quick, claiming a state champion title in her first year playing the sport.

“We didn’t even think that we would make it alive after the second game, let alone go all the way to being state champs at the end of the season,” Delegan said.

PE department chair Courtney White started playing rugby in college and hasn’t put it down since. He found a community of teammates unlike anything he had experienced before.

Rugby isn’t going anywhere soon. According to BusinessWire.com, it’s among the top five fastest growing sports in the United States. White can understand why.

“It’s one of those things that just keeps bringing you back,” White said.