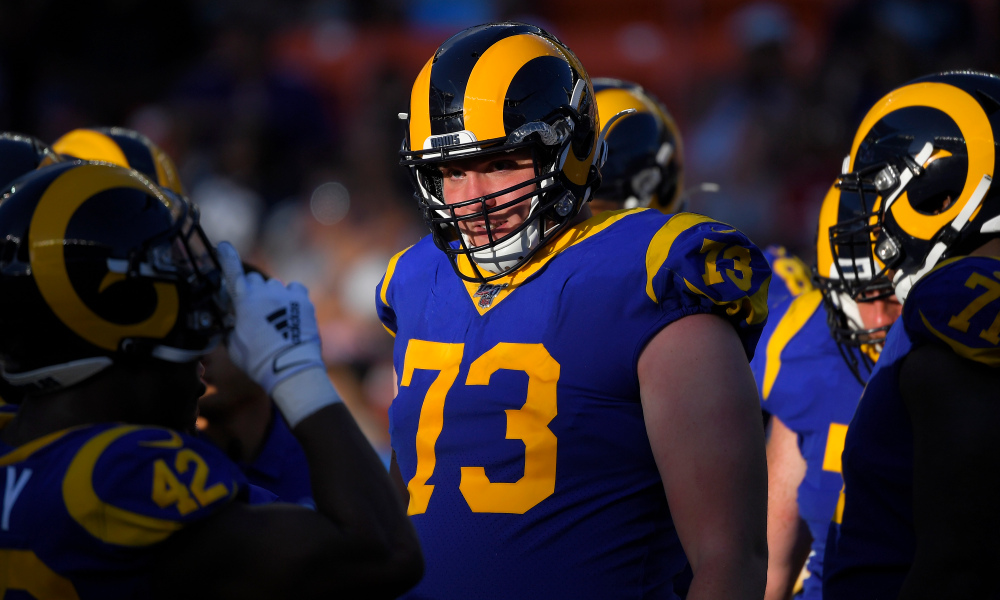 DGN alum David Edwards made his first career NFL start Sunday night for the Los Angeles Rams. The Rams’ 37-10 victory over the Atlanta Falcons broke a three-game losing streak, moving the team’s record to 4-3. The game marked a realized dream for the 6-foot-6 308-pound offensive lineman.

“Thought it was awesome to get the opportunity to start a game in the NFL. Something I have been dreaming of since I was a little kid,” Edwards said.

Edwards graduated from DGN in 2015, attending the University of Wisconsin with the intention of playing for the Badgers at tight end. Badgers coaches saw potential as Edwards steadily gained weight, yet maintained his athleticism. He was introduced to the offensive line at the start of the 2016 season, finding a spot that would carry him to the 2019 NFL Draft. The Rams selected Edwards in the 5th round as the 169th overall pick.

“Dave’s that guy who’s big, athletic and he knows what he’s doing, so it’s my job to make him right. I make the call, I know he’s going to listen and I trust him. I think it’s going to be good,” said Rams’ center Brian Allen in an interview with Rams’ staff writer Stu Jackson.

The feeling of confidence endured throughout the game.

“I was really impressed with his poise and maturity for a rookie. You’re talking about a guy that’s played the tackle position at Wisconsin and to be able to seamlessly transition inside to left guard,” Rams’ head coach Sean McVay said in a postgame press conference. “…seemed like they protected really well all day, did a nice job with communication, and I’m excited to look at the tape, but it feels like [Edwards] did a nice job today.”

His efforts on Sunday were rewarded with a meal at King + Duke restaurant in Atlanta. Rams’ QB Jared Goff made sure Edwards and fellow offensive lineman were taken care of in return for the protection they provided. Edwards was tasked with stopping Falcons’ defensive tackle Grady Jarrett, who reached Goff in the pocket only once throughout the game.

“In terms of the Bengals next week, just continuing to find our identity as a team. We made some big strides in the game yesterday and are starting to find our stride,” Edwards said.