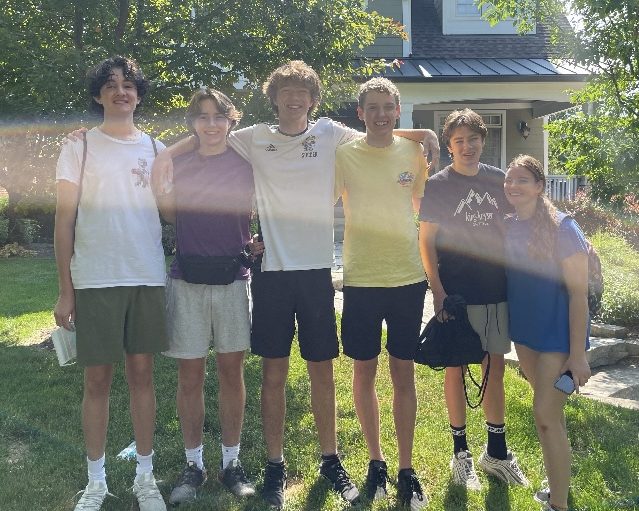 CREATING BONDS: The group of six close friends pose together for a picture. (Photo courtesy of Isabel Baker)

CREATING BONDS: The group of six close friends pose together for a picture.

“Caden walked out with a sombrero, sparkly silver vest, and an indescribable green patterned shirt,” senior Finn McTigue said, after he and some friends searched for something to wear for the Halloween-themed football game last season. “He then sang classic Mexican music at the top of his lungs while driving through downtown Downers Grove.” McTigue reminisces on his favorite memories with his friend Caden McCann, who passed away Aug. 13, three days before the start of his senior year. Caden was involved in cross country at DGN but could more often be seen in all-black attire after a shift at Parkers’ Restaurant & Bar. As friends reflect on their times with Caden, there’s one common phrase in each memory, “It made me laugh really hard.”

In a friendship lasting since elementary school, senior Michael Logan recalls the time he and Caden ran the St. Mary’s 5K together. They ran side-by-side for most of the race.

“I remember thinking ‘He’s totally going to spring at the end.’ I sped up and Caden started sprinting as fast as he could and beat me,” Logan said.

Caden was so tired after the race that he went home and missed the award ceremony.

“I got his medal for him and brought it over to his house. I remember the look on his face when I showed him the medal and told him that he won,” Logan said.

The group of close friends reflect on their many memories with Caden.

“He was the best friend I’ve ever had and probably will ever have,” senior Gianni Perna said. “It was impossible to have a bad time when he was around. He was always there when you needed him with a joke and a smile.”

Senior Andy Cameron remembers Caden as carefree and willing to do random things on impulse to make his friends laugh. In one instance, the group of friends dared Caden to let go of his golf club while swinging at TopGolf.

“Sure enough, the next time he went to hit the ball, he tossed the club at the ceiling right in front of our waitress. Even she started laughing with him,” Cameron said.

“I’ll always miss the countless memories and, of course, his singing voice that always had to be louder than the actual music,” said senior Isabel Baker. Baker remembers Caden’s laugh as being contagious after cracking a joke.

“Caden’s sense of humor and his strong imagination reflected who he was most as a person, and why I loved being his friend. Caden was a different kind of special,” Baker said.

Entering a brand new school of unfamiliar faces, senior Jonathan Westfall remembers Caden as one of his first friends at DGN, and remained a close friend for the following years.

“Caden invited me over to his house freshman year for a super bowl party. It was my first ‘party.’ He let me into his friend group which meant a lot to me as a new kid,” Westfall said. “ He helped me not feel alone freshman year.”

“I was immediately met with kindness,” Engstler said.

In a conversation junior year, Engstler brought up their partnership in Spanish class freshman year.

“I remember saying, ‘Who would’ve thought Spanish shoulder partners would still be friends today.’ I’m thankful for that teacher who paired us together, and I am so lucky to have been friends with Caden,” Engstler said.