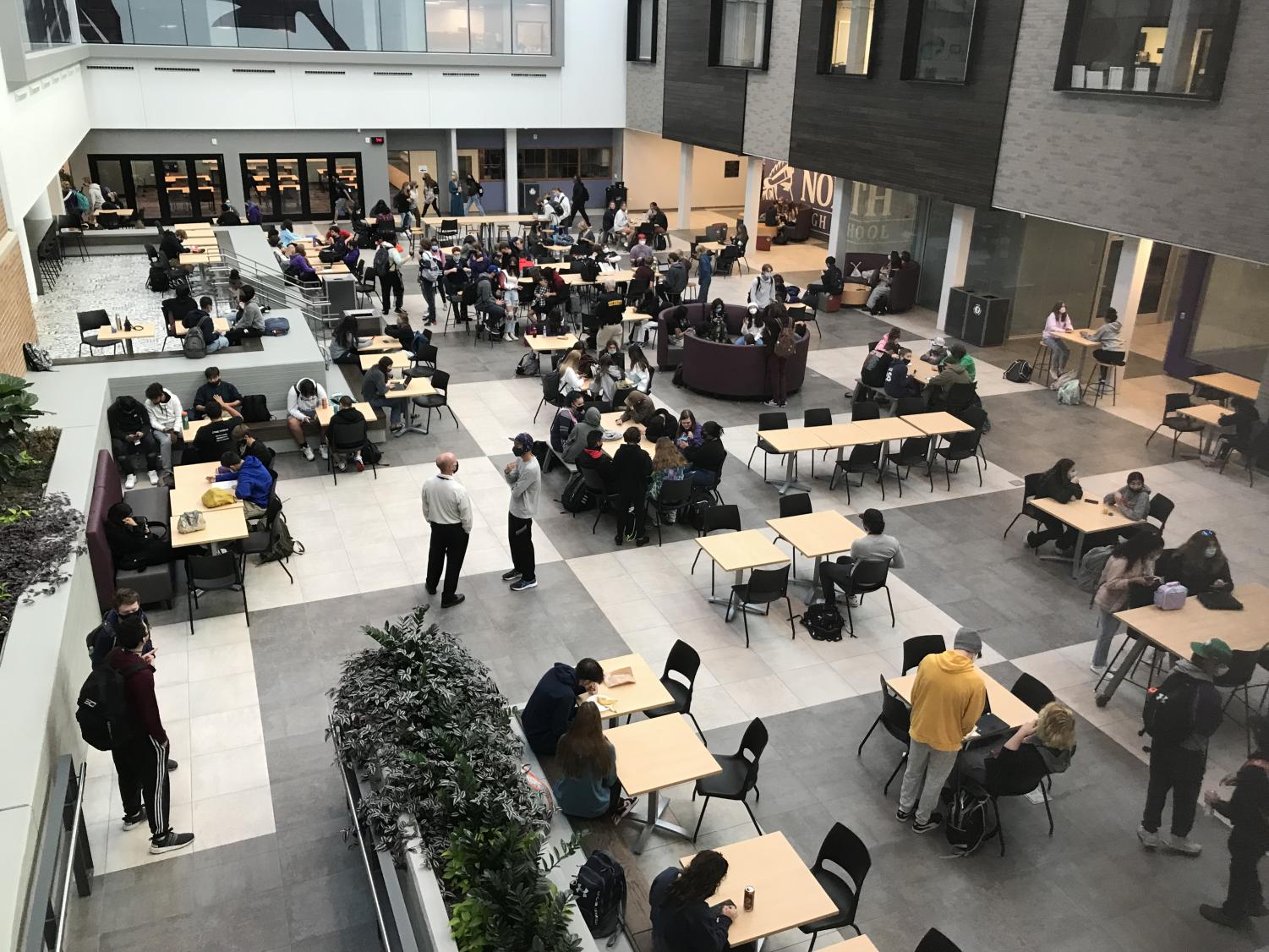 According to an Omega survey taken by 279 students, 88.9 percent rate their experience this year during the revival of standard, fully in-person learning as “fair” or “excellent.” On the other hand, only 4.3 percent of students described their experience as “poor” or “not good at all.” (Nicholas Hanscom)

According to an Omega survey taken by 279 students, 88.9 percent rate their experience this year during the revival of standard, fully in-person learning as “fair” or “excellent.” On the other hand, only 4.3 percent of students described their experience as “poor” or “not good at all.”

“In the beginning, I was happy to return to normal, but as the year has gone on, we have all struggled to get back to what was normal,” math teacher Joann Purcell said.

As the 2021-2022 school year concludes, students and staff members express different reactions to the return of a more traditional school year. While most report an overall positive experience, others reflect on the drawbacks they faced.

“I love being in-person for classes because I felt isolated on Zoom, and I missed the interactions that I got to have with peers every day,” senior Cailee McGinnis said. “On the other hand, I know that a lot of my friends who are more introverted really thrived off of remote learning.”

On one hand, many students and staff members felt enthusiastic going back to in-person learning. According to an Omega poll from May 3 taken by 279 students, 68.8 percent stated that the best part of returning to a more traditional school year this year was getting to interact with friends and schoolmates every day.

“I love being around students and supporting them,” Associate Principal for Staff and Students Kelly Zuerner said. “Nothing compares to the energy, the smiles, the conversations and the sense of community.”

Likewise, remote learning didn’t grant many students the classroom experience they wanted, so returning to the building full-time gave them a sense of satisfaction. McGinnis, for instance, loved the ability enjoy the energy and memories of classic school life again.

“Returning to in-person school has had a really positive impact on me because [during remote learning] I missed the realness and rawness of classrooms [like] how something could just happen that would make the whole class laugh,” McGinnis said.

Freshman Henry Ham is glad he spent his first year of high school in a more traditional setting, which allowed him to participate in activities the pandemic prevented him from doing.

“For me, the highlight of having a “normal” year for my first year of high school was getting to experience new things I would never have gotten the chance to do in middle school,” Ham said. “This year, I’ve tried a lot of new things like Jazz Band, Theatre and Drumline. I’ve had lots of fun.”

However, not everyone reported having a positive experience returning to “normal” school year. According to the Omega survey, 72.4 percent of students stated that this year, they struggled with the ‘learning gap’ caused by remote learning.

“Students are struggling a great deal in classes because they did not learn what their transcript shows that they learned last year,” Purcell said. “That lack of knowledge causes the [student] stress.”

On the other hand, for other students, coming back to in-person classes prevented them from doing activities they enjoyed during remote learning.

“My least favorite part of going back to traditional school was the lack of ability to make my own food, specifically for lunch,” junior Helen Parker said. “Last year, with the long break for lunch and the lack of commute time, I had a lot more time to cook tasty food. I have really missed that this year.”

While the 2021-2022 school year might have presented a few drawbacks for some people, though, the significance of in-person learning for students and staff members ultimately outweighed the negatives. With the Omega poll showing that 88.9 percent of students rated returning to a traditional school year as either “fair” or “excellent,” the resurgence of fully in-person learning at DGN this year caused many students and staff members to consider its genuine value.

“We are a special community and one of which I am so very proud of,” Zuerner said. “The connection and sense of belonging we all create when we are in the building cannot be replicated through technology. Our entire community did their best to support one another during the pandemic, but nothing beats being together.”