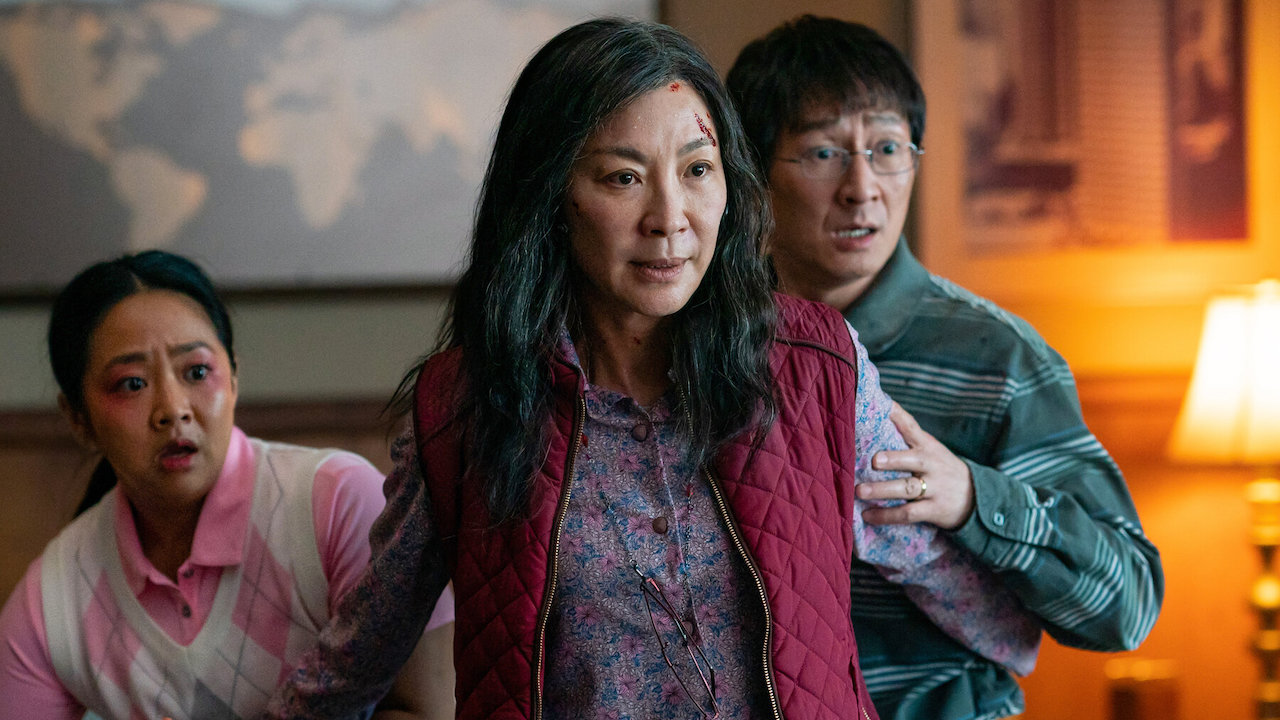 Filled with warmth, love, family and chaos, “Everything Everywhere All at Once” combines several themes and ideas relevant to contemporary society while also providing an entertaining experience for any audience. (Photo Courtesy of CinemaBlend)

Filled with warmth, love, family and chaos, “Everything Everywhere All at Once” combines several themes and ideas relevant to contemporary society while also providing an entertaining experience for any audience.

Review: Everything Everywhere All at Once

A touching tale of family, love and forgiveness told in the form of a wild, action-packed science fiction film, “Everything Everywhere All at Once” is one of the most unforgettable movies. Looking at the film as a whole, the sole factor that takes away from the film’s heartwarming message is the initial confusion felt by the audience—although their puzzlement is only temporary.

Directed by Dan Kwan and Daniel Scheinert, the film centers around Evelyn Wang (Michelle Yeoh), the film’s main protagonist. As the IRS is auditing her laundromat business, Wang and her husband, Waymond (Ke Huy Quan), visit the IRS building to speak with inspector Deirdre Beaubeirdra (“Halloween” star Jamie Lee Curtis). To Wang’s understandable surprise, while in the building’s elevator, Waymond’s body is briefly taken over by an alternate version of him named Alpha Waymond, who came from a place known as the ‘Alphaverse.’

Alpha Waymond explains to Wang that every decision made in life creates a new universe—collectively creating the ‘multiverse’—and that she is destined to defeat the despicable Jobu Tupaki, who terrorizes and threatens to eradicate the multiverse. Wang remains confused and reluctant; however, she and Alpha Waymond soon encounter Jobu Tupaki in the flesh. From that point on, reality becomes increasingly distorted as Wang finds herself forced to take on Tupaki to save the multiverse and her life.

One of the most distinguishing features of “Everything Everywhere All at Once” is that it explores so many issues in contemporary society. Probably the most significant theme the film analyzes is expressing kindness to others, which Wang ultimately learns to use against Tupaki and undo the unforgiving chaos Tupaki provokes in the multiverse. Wang soon also discovers the importance of acceptance and forgiveness, which she demonstrates by apologizing to her daughter (Stephanie Hsu) for not approving of her girlfriend, Becky (Tallie Medel).

However, what really makes this movie so unique is that it is heartwarming not only because of its moving lessons but also because of its simultaneously heartening and quirky humor. Whether it be Wang and Beaubeirdra dancing with each other with hotdogs for fingers, a raccoon controlling a teppanyaki cook from beneath a chef’s hat like Remi in “Ratatouille” or Tupaki showing Wang the black hole-like ‘everything bagel’ she created, audiences experience some of the most eccentric and indelible comedy ever produced.

Comprehensively, the only noteworthy aspect of “Everything Everywhere All at Once” that needs some improvement is its general execution. Multiple scenes flash through several realities in the multiverse, allowing readers a mere few seconds to adjust to a single setting or detail; further, the film introduces new ideas and character versions every other minute in the circus of the battle between Wang and Tupaki. The consistent puzzlement felt by audiences as they try to understand the complicated structure and operation of the multiverse while also trying to follow the film’s confusing plot consistently weighs down the humorous and meaningful parts of the movie.

That said, the audience’s bewilderment subsides with time. Despite initially seeming to go everywhere, everything makes more and more sense as the film progresses. Consistent humor distracts viewers from their initial confusion, and out of the sea of perplexity emerges a wave of tearful, touching revelations about love and forgiveness. In the end, it’s safe to say that this film was everything—hilarious, confusing, touching and action-packed—all at once.