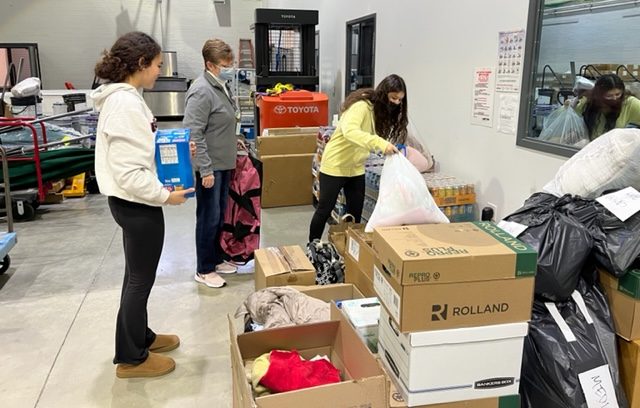 Empowerment Club sponsor Karen Spahr-Thomas and members Jennifer Lucina and Stephanie Baker prepare items from the Ukrainian Donation Drive at the DGN loading dock. According to Spahr-Thomas, the items went to separate locations in Naperville and Bradley, where they were then transported to Ukraine. (Nicholas Hanscom)

Empowerment Club sponsor Karen Spahr-Thomas and members Jennifer Lucina and Stephanie Baker prepare items from the Ukrainian Donation Drive at the DGN loading dock. According to Spahr-Thomas, the items went to separate locations in Naperville and Bradley, where they were then transported to Ukraine.

Students, staff come together amid Russia-Ukraine conflict to support Ukrainians

“There’s definitely a large portion of the students here at DGN who feel united in the face of the conflict we’re seeing between Russia and Ukraine,” Empowerment Club Humanitarian Committee leader Madeline From said. “I believe it [this unity] evokes a compassion that transcends political divides, religious views and so many other areas of division.”

As the conflict between Russia and Ukraine continues, students and staff evoke a sense of collective sympathy for the Ukrainians and are coming together to help them through their actions. Whether spreading awareness of the foreign crisis or raising money and donations, a unified feeling envelops the school as students and staff work to support the Ukrainians.

“It’s not a scandalous position to be concerned about war, to be concerned about humanitarian crises,” social studies teacher Justin Ashton said. “I think what’s unifying about that is people can see that there is suffering in the world, and if there’s something that we can do to solve it or to try and help or impact positively, we will reach out and try to do that.”

We [were] seeing students and staff left and right dropping off items at the donation table. It [brought] a focus where you [could] come together and unify around one cause, and it [gave] a purpose for students.”

On the one hand, numerous students and staff members are coming together to spread awareness of the Russia-Ukraine conflict in an attempt to inform others about it and inspire them to do their part to help and support the Ukrainians.

For Ashton, keeping his students up to date about the foreign crisis is a regular endeavor.

“In Government and my Global Connections classes, I talk pretty extensively about it [the war],” Ashton said. “I post updates on Google Classroom for students to be able to see what’s going on. We [teachers] have tried to present the facts of the case and look at the humanitarian side and the concerns of the innocent civilians that are [involved], both in Ukraine and in Russia.”

Similarly, From recently presented about the Russia-Ukraine conflict in an Empowerment Club meeting, which she feels was both out of personal sympathy and an urge to spread the news about what is happening.

“I wanted to present about the Russia-Ukraine conflict because it can be really difficult to decipher the truth and the most important facts of the matter when you’re being bombarded with overwhelming media sources, opinions and myths,” From said. “Humanitarian aid is [also] something very near and dear to my heart, so I [felt] compelled to help out with this matter as much as possible— and sharing factual, trustworthy information seemed like a great place to start.”

But students and staff do not limit their sharing of news about the Russia-Ukraine conflict to clubs and classes. For instance, junior Kiley Kapral also tries to promote the Ukrainians and to share news of the war on Instagram.

“I feel that personally, it can help if you’re posting about the war and spreading awareness. If we didn’t know [about the conflict], we wouldn’t have known that Vladimir Zelinsky is fighting for his country—which is really powerful. [And] the more that we spread, the more Ukraine can get goods and resources to keep fighting,” Kapral said. “I [also] feel like standing up for people is just what I’ve been meant to do in my life.”

Along with spreading awareness of the Russia-Ukraine conflict, students and staff are supporting the Ukrainians by collecting donations and money for them.

One such effort was the Ukrainian Donation Drive, which both Empowerment Club and German Club led from March 8 through March 18. Students and staff alike donated various items, including (yet not limited to) first-aid kits, hygiene products, baby products and non-perishable food. According to Spahr-Thomas, students and staff donated over 5 thousand pounds (2.5 tons) of items.

“We [were] seeing students and staff left and right dropping off items at the donation table,” Spahr-Thomas said. “It [brought] a focus where you [could] come together and unify around one cause, and it [gave] a purpose for students.”

The two clubs are now selling wristbands sporting the colors of the Ukrainian flag—yellow and blue—for $5 each. German Club sponsor Gunde Burritt explained how they raised roughly $2 thousand so far and that with the Russia-Ukraine war still at large, German Club intends to resume the sale after spring break.

“Mrs. Spahr-Thomas and I have been organizing the whole ‘Ukraine humanitarian help’ fundraiser together. We collected a huge amount of items to be shipped to [Ukrainians] in Poland [and] Lviv, and now we’re selling the wristbands to continue to help in a different way,” Burritt said. “Our community has been insanely generous with donations as well as helping out in person. Many students and staff have bought wristbands and are wearing them to show their support for a country that has been invaded unprovoked.”

All of these measures considered, the Russia-Ukraine conflict still prevails, and the Ukrainians need all of the help they can get. With that said, From encourages students and staff to still keep the Ukrainians in their hearts and to all continue supporting them as their war with Russia wages on.

“I think it’s important for people to realize that we’re watching history as it unfolds. The hard part about this is that it means we have to continually update ourselves on what’s happening and what changes are being made. But I would urge everyone to stay diligent—to keep watching the news, to keep reading trustworthy articles and to keep the conversation going,” From said. “Let’s not get bored of this issue because it’s not as new anymore—we absolutely have to continue to remain invested.”