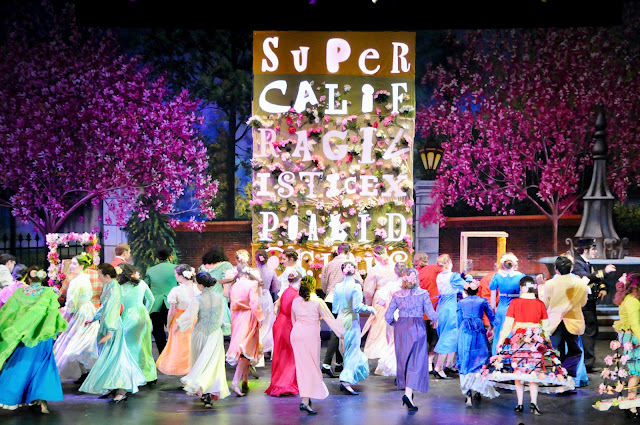 “Practically perfect in every way,” is one way to describe this year’s musical performance of Mary Poppins. With its vibrant costumes, dynamic set designs and flawless performances, the Mary Poppins production was one of DGN’s finest.

One of the defining characteristics of this musical was the flying scenes. Whether it was Mary Poppins (Harley Blanchard) flying over the crowd with her umbrella or Bert (Jon Isoniemi) flipping through the air, there is no doubt that this technology added to the magical nature of the musical.

All of the set and costume designs also tied into making the musical more realistic. The production crew did a great job of making sure the audience was immersed in the London setting through their engaging, dynamic backdrops and lighting arrays. Additionally, the costume designers did an excellent job of ensuring that each character’s costume fit each scene perfectly.

Moreover, it was evident that the cast and crew had rehearsed numerous times; the flight scenes, dance numbers and set changes were seamless. The pit orchestra never missed a beat and was always in unison with the actors. Overall, the production quality on stage and behind the scenes was outstanding.

That said, one shortfall of the opening night performance was some technical difficulty with the sound of some of the actor’s microphones. At times, the microphones emitted static that muted the actors’ voices; yet the majority of these issues were sorted out by the end of act one and didn’t interfere too much.

By far my favorite part of the whole show was “Step in Time.” The number not only featured great singing and dancing but also showcased some of the unique talents of the cast. Tap dancers Harley Blanchard (Mary Poppins) and Audrey Lee (Featured Dancer) were given time to showcase their talents, along with a group of three Irish dancers who were also given time to perform during “Step in Time.”

Out of the three musicals I have seen at DGN, Mary Poppins was, by far, my favorite for it’s special effects and impressive vocal performances.