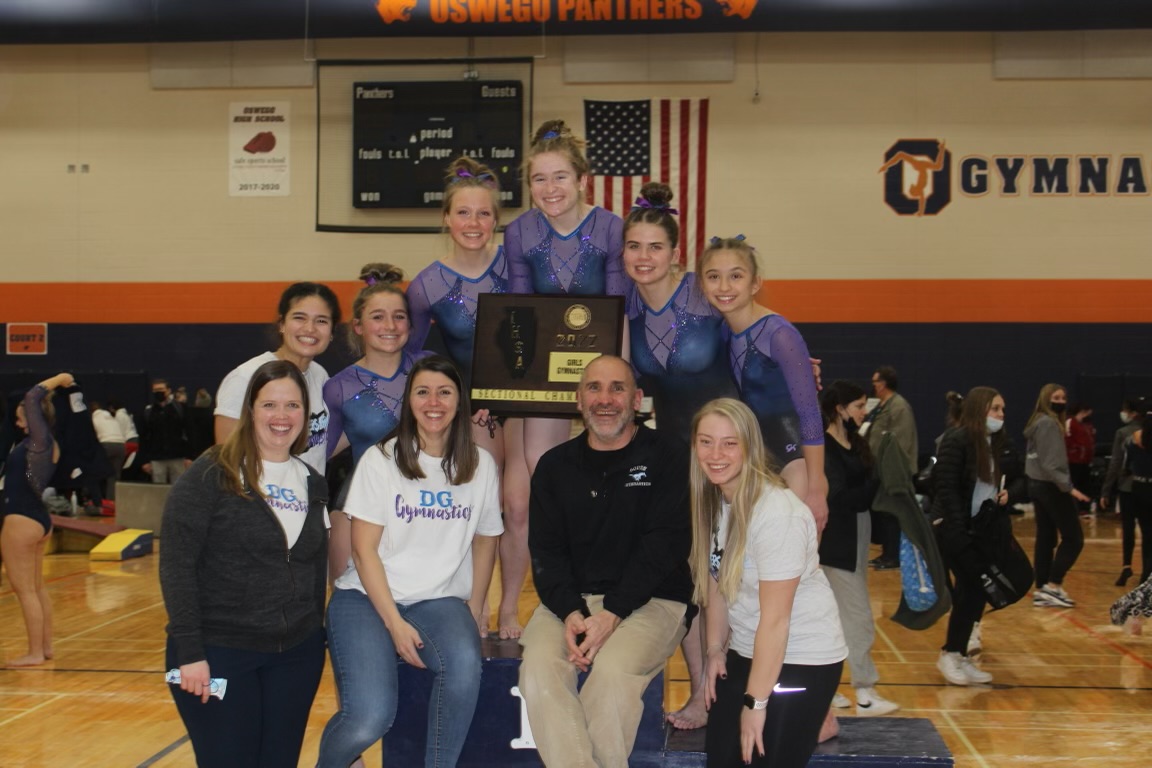 CONQUERING: The District 99 Trostangs win their sectional meet Feb. 7 at Oswego High School, advancing them to the state championship.

CONQUERING: The District 99 Trostangs win their sectional meet Feb. 7 at Oswego High School, advancing them to the state championship.

After a successful season, the combined DGN and DGS varsity girls’ gymnastics team looks to head to the state championship Feb. 18 and 19 at Palatine High School. After qualifying for state two years ago, and having the team to be able to qualify last year (despite the state meet being canceled due to COVID-19), the girls look to perform this year.

After consolidating the DGN and DGS teams into one for the 2019-2020 season due to the lack of facility and coaching staff, the team has faced some challenges. For one, with six varsity gymnasts—three from DGN, three from DGS and only five competing—the small numbers of the team pose challenges when it comes to logistics.

“With a small team, we don’t have any depth. If someone gets hurt or injured, it is hard for the team to recover,” DGS Girls’ Gymnastics Assistant Coach Bill Norris said. “It also puts more pressure on each athlete. Each athlete has to work all-around and be proficient at each event.”

The small numbers also mean that the competitors need enough time to rest in between competitions because of the lack of alternate gymnasts. One of the top varsity balance beam competitors, senior Gretchen Lucina, tore her ACL at the Naperville North invite Jan. 8, which put her out of competition for the rest of the season.

“After doing gymnastics for 15 years, it’s really upsetting to not be competing at the state meet for my senior year,” Lucina said. “I know that the rest of the team will do amazing, and although I wish I could compete, I will be cheering them on from the sidelines.”

Because of Lucina’s injury, each gymnast will be competing all-around at this year’s state tournament. This means that each competitor will compete in all events: vault, bars, beam and floor. While this can prove more challenging, the team looks to use what they have learned in practice and perform their best at the state meet.

“We have all worked so hard and gained a lot of new skills. Even though we are such a small team, we have done many pressure sets, so when it comes to the real meet we are all ready,” freshman varsity gymnast Alli Palansky said. “I know that if we hit all the events like we do in practice, we definitely have a strong chance of making it at state.”

Given the recent success of the Trostangs, with three straight years of a state-qualifying team, the girls look to edge out the tough competition despite their setbacks. Given how COVID-19 impacted last year’s situation, the team is grateful to be given the opportunity to showcase their talent yet again.

“It feels wonderful to qualify the team and three of the girls to the state meet. Last year we had a really strong team that undoubtedly would have been at the state meet, if there was one,” Head Girls’ Gymnastics Coach Kristyn Campos said. “I am happy to see that even after a long season last year that the girls were able to come out and be competitive as we traveled around to compete face to face.”

While gymnastics is often perceived as an individual sport, the Trostangs follow their motto, “One Team, One Dream.” The DGN and DGS gymnasts will continue to work together at the state meet to support each other.

“We are hoping to get another high score of the season. With seven other teams competing with teams of 10-12 girls, they can easily rely on alternates if something goes wrong,” junior and varsity gymnast Emily Smetana said. “We practice as a team, and we compete as a team. While we all have individual goals, our team score comes first.”