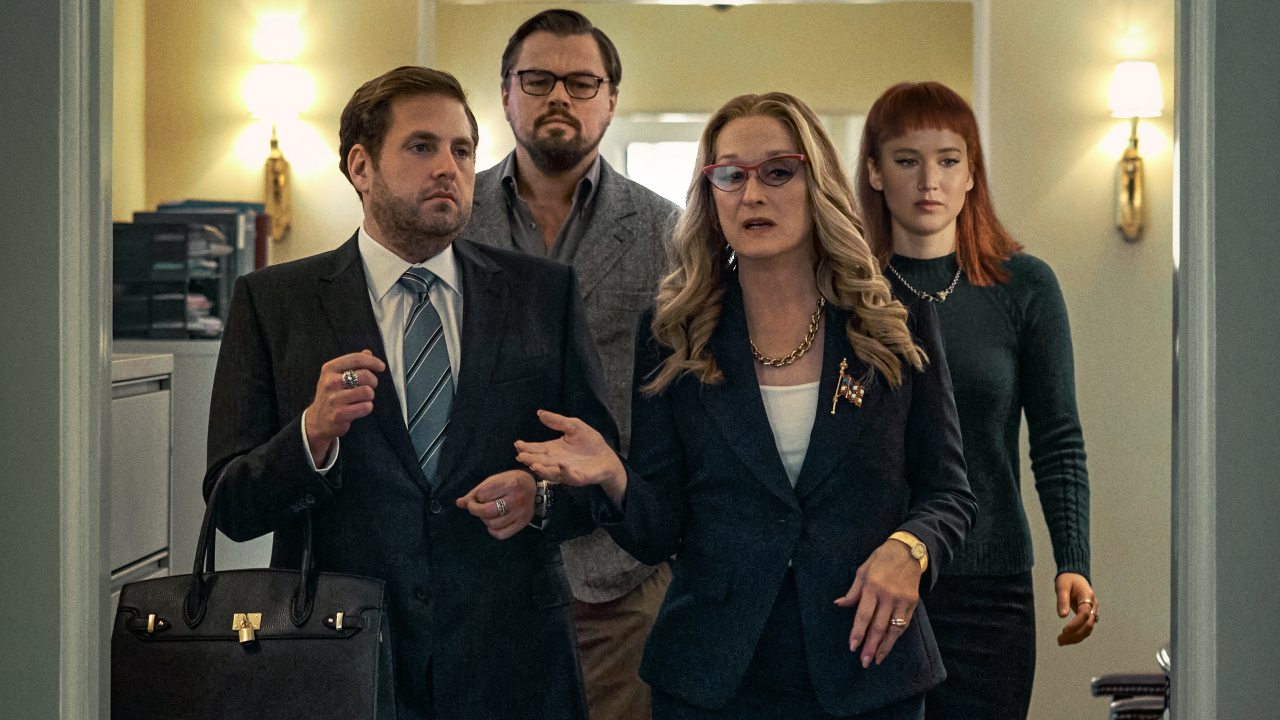 While it’s nearly impossible to agree on things in this day and age, it’s safe to say that screenwriter and director Adam McKay’s film Don’t Look Up wins the award for the most intense emotional rollercoaster. A stunning ride of satire, social commentary, challenging ideas and disturbingly realistic depictions of modern society, no two people will think or feel the same after seeing this film.

Released Dec. 10 on Netflix, Don’t Look Up focuses on astronomy grad student Kate Dibiasky (Jennifer Lawrence) and her professor, Dr. Randall Mindy (Leonardo DiCaprio), as they attempt to convince everyone of a colossal comet that will hit the earth in roughly six months. However, frustration, hopelessness and desperation ensue as many negate the discovery, paying special tribute to the scientific denialism our world often experiences today.

One intriguing feature of Don’t Look Up is its dabbling in several controversial themes—many of which act as the pillars of modern society. Politics, gossip, media, technology, religion, climate change and human nature all find their home in this film and create a sort of social warzone for its characters as they essentially destroy themselves well before the comet hits the earth.

Moreover, audiences will immediately realize that many of the film’s characters portray prominent real-life figures. While Dibiasky seems to take on the role of environmental activist Greta Thunberg, President Janie Orlean (Meryl Streep) reflects the actions of former President Donald Trump and Peter Isherwell assumes the same erratic attitude of entrepreneurs Elon Musk and Jeff Bezos. In this light, Don’t Look Up acts as an eerily spotless mirror of our very own world.

Of course, McKay did a superb job of balancing his film’s serious and complex social commentary with authentic humor. Whether it be Chalamet hollering “I love fingerling potatoes!” in the middle of a grocery store, DiCaprio having a mental breakdown on national television or pop star Riley Mina (Ariana Grande) diminishing Dibiasky and Mindy’s concern over the comet by boasting about her shooting star tattoo, the film is packed with comedy in nearly every scene.

That said, the film does get a little confusing at times. The continuous presentation of political, cultural and philosophical disparities throughout the movie is one thing; however, when you mix that with the film’s quick pace and its shocking, over-the-top ending that could arguably ruin the rest of the movie for some viewers, it is challenging to not pause the TV and wonder what in the world you’re watching. Then again, as the real modern world is also quite confusing, McKay likely made his film this way on purpose.

All things considered, Don’t Look Up might not be the film for everyone. Stuck in a worldwide pandemic filled with other troubles, many likely don’t want to fathom the thought of a colossal comet destroying humanity. But if this movie teaches us anything, it’s that a deadly comet might not be what’s approaching the world.

Don’t look up, as they say.