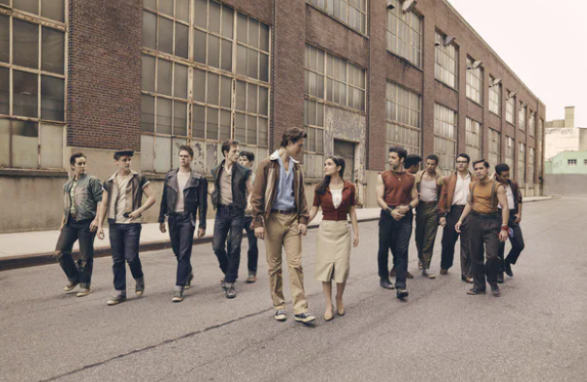 Jaws, E.T., and Schindler’s List. For director Steven Spielberg, “impressive” is an understatement. As for West Side Story 2021, “decent” is an overstatement. I was never able to love the original 1961 West Side Story, and Speilberg had the opportunity to change my mind. With a charismatic cast and my favorite familiar face, Ansel Elgort playing the love interest, today’s version beat the first– although to me, that doesn’t say much.

Following the original to the T, West Side Story opens with the “Jets”– the white gang of New York City snapping their fingers in unison as they’re on the prowl for some “Sharks”– the Puerto Rican gang. With this major rivalry, the Jets attempt to look as intimidating as possible, walking slowly in their tight 60s jeans with their greasy head of hair on a swivel. The pack has tough grimaces on their faces but the way they burst into song and exaggerate each motion in their dance moves just makes me want to laugh at them. Not because they’re men who are singing and dancing, but because it is so ironic.

Sometimes in a movie, appreciating the love story is like believing in Santa. It’s always a quickly developed relationship where the characters meet by chance, and say “I love you” thirty minutes later in the film. As a watcher, you know it’s unrealistic and would never happen to you no matter how hard you wish. But you come back for the cheesy romance everytime. For the first time ever, this love story was too cheesy for me.

Maria (Rachel Zegler), a Shark, and Tony (Ansel Elgort), a Jet, meet at the school dance and create total chaos between the gangs as star-crossed lovers. Just over halfway through the movie, they are harmonizing in song to become spiritually married. Singing in their opera-like pitches with eyes twinkling at each other, I could only think “ew” instead of “aw”. In this Romeo and Juliet parallel, I’d almost rather read Shakespeare than sit through this movie.

“Love conquers all” is a common but classic theme. Zegler does a powerful job of bringing this home in the end scene as she screams at both gangs for the tragedy they have created out of petty hate. Simply being a slightly better version of the original, West Side Story was a flop in my eyes. I’m sure someone out there would love it, probably just my grandma though.

When my sisters went to see West Side Story without me, they came back with mixed reviews. My older sister disliked the movie because she thought the whole plot was unrealistic; while my younger sister came home blaring the soundtrack because she loved it so much. I would have to side with my younger sister this time, I really enjoyed the movie. Critics seemed to like it as well, as it was recently just announced that West Side Story has won the 2022 Golden Globe for Best Motion Picture – Musical or Comedy, as deserved.

“Maria” and “America” were my favorite songs by far. These songs are so catchy, and you will probably find yourself singing to them in the theater. To be fair, when I went to watch the movie, I already heard the songs multiple times prior because of my sister. The music brought me joy because they were upbeat songs and had many different background characters involved with the scene. Unlike my fellow journalist, Julia, I thought the dancing and the over dramatization fit the scene perfectly. Sometimes musicals have too many songs, but this movie had the perfect balance of songs to dialogue.

The ‘sharks’ (Puerto Ricans) and the ‘jets’ (white New York residents) hate each other, physically fighting over anything they can. I would agree with Julia that the love between the main characters, Maria (Rachel Zegler), a Shark, and Tony (Ansel Elgort), a Jet, was a bit unrealistic, but the movie is a remake of the original where the same conflict happened. No one really questioned it then, so why should they now? The love between the crosstown lovers creates even more tension throughout the groups leading to a brawl.

Maria was my favorite character from the movie. First of all, this was one of Zegler’s first major films as she is only 20 years old. I was very impressed by her vocal range and overall talent. I was not the only one who was impressed by her acting, as she won the 2022 Golden Globe for Best Performance by Actress in a Motion Picture – Musical or Drama.

The ending of the movie did throw me for a loop, but for spoilers sake, I will have to have you watch the movie yourself if you haven’t already seen the original. I was very excited to see this movie, and I was not disappointed. The contrast between the Sharks and Jets made different colors pop out and the setting was ultimately made perfect for the movie. Contrast to Julia, I am not a grandma, and I still loved West Side Story.