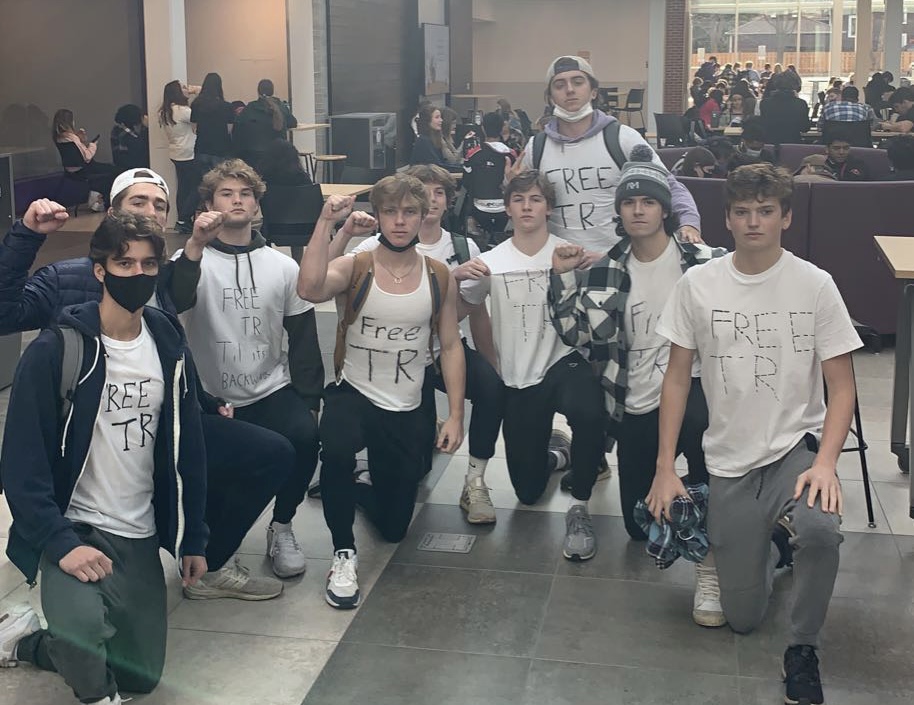 In attempts to reduce the potential negative impacts of harsh disciplinary measures on students, Illinois passed Senate Bill 100 on Jan. 10 of 2015.

Among other provisions, this bill aimed to amend school discipline procedures by “[limiting] the number and duration of expulsions and suspensions to the greatest extent practicable,” and recommending that “school officials consider forms of non-exclusionary discipline prior to using out-of-school suspensions or expulsions,” according to Section 10-22.6. of the bill.

These guidelines seem to be in conflict with the suspension of Omega Sports Editor senior Timmy ‘T.R.’ Ryan regarding allegations of bathroom vandalism.

At approximately 9:15 a.m. Dec. 2, Ryan was called into the deans’ office and questioned about the vandalism of a bathroom stall door in the boys’ third-floor bathroom. Ryan had used that same bathroom that morning at approximately 7:45 a.m.

Ryan was questioned for around 20 minutes by his dean, Tim Tilton, and released at approximately 9:50 a.m. to his third period class. Ryan, who has had no prior encounters with the deans, was not concerned about the initial questioning.

“At first when I [was questioned], I wasn’t too nervous because I thought ‘it wasn’t me, whatever.’ But when I found that [the deans] really weren’t interested in hearing my side of the story, that’s when I started to get frustrated,” Ryan said. “I felt defenseless.”

By 11:00 a.m., the administration had contacted Ryan’s parents and suspended him for an undecided amount of days. Julie Ryan, Timmy Ryan’s mother, views the suspension as unnecessary and unjust.

When asked if the school provided her or her family with visual evidence of the damage or a written explanation of her son’s suspension, Julie Ryan said, “We didn’t get anything. I asked many times.”

This is in conflict with the suspension procedures outlined in the DGN student handbook, which state that after an out-of-school suspension is issued, “Written notification of the Out-of-School Suspension is sent to the parent/guardian, by the Dean, informing them of the infraction and their legal recourse for appeal.”

The firm belief in Timmy Ryan’s innocence goes beyond the Ryan family, with students taking up the slogan “Free T.R.,” referencing Timmy Ryan’s nickname, to protest his suspension.

“There is a lack of evidence to prove him guilty beyond a reasonable doubt,” Lynch said. “I wanted to give students an outlet to voice their opinions on the situation.”

Senior Sam Bowerman is perhaps the most confident in Timmy Ryan’s innocence, pointing out that he noticed the bathroom was damaged prior to Dec. 2.

“During my commons period, I went to the bathroom on the third floor. I saw the corner of one of the stall doors bent. This was about a week before I heard about Timmy’s incident,” Bowerman said.

Senior Alex White is an ardent supporter of the “Free T.R.” movement and drafted an email to Principal Courtney DeMent in defense of his friend.

“If you’re not standing up for your friends, what kind of friends are you? We were sticking up for our friend,” White said.

Although Timmy Ryan’s suspension has been completed as of the end of the school day Dec. 3, Julie Ryan remains frustrated with DGN’s handling of the situation.

“[Suing the school] has crossed my mind. It’s not something I want to spend a whole ton of money on, but if I could find somebody who was willing to do it without a huge expense then [I would],” Julie Ryan said.

When asked about the situation, Associate Principal for Staff and Students Kelly Zuerner and the deans office declined to comment.