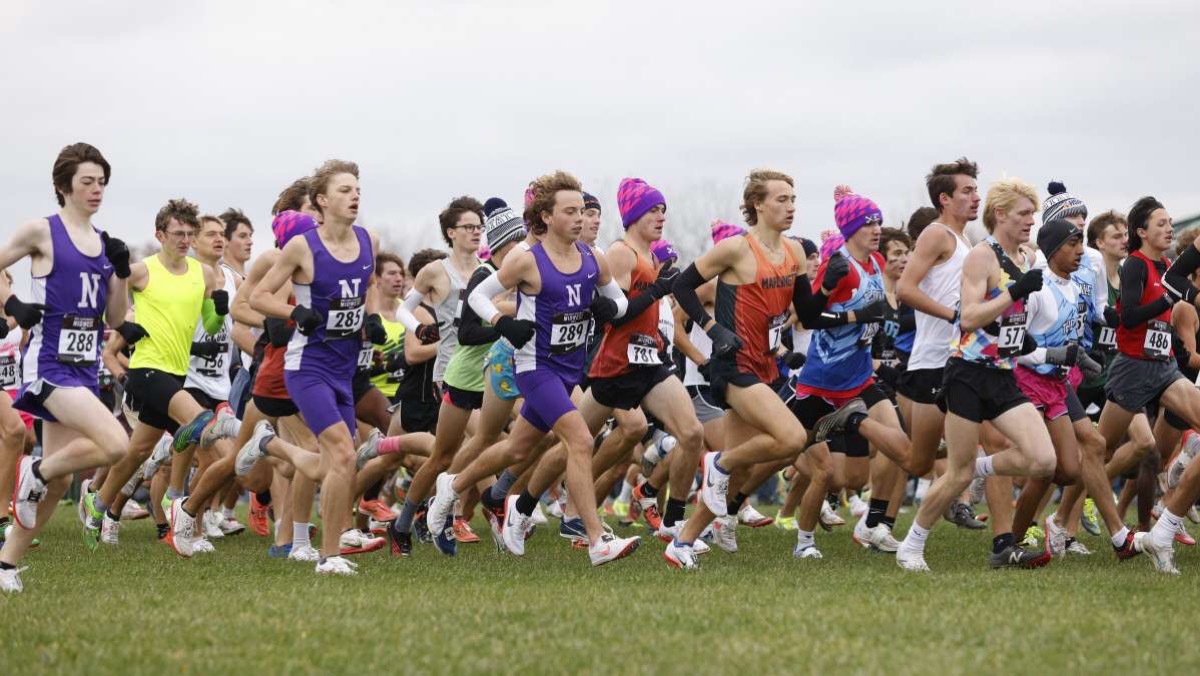 RUN WITH THE PACK: (from left to right) DGN runners Ryan Eddington (10), Jack Benge (12) and Topher Ferris (11) take off from the starting line at the Nike Cross Country Regional race Nov. 14. (Photo by Ethan Wood)

RUN WITH THE PACK: (from left to right) DGN runners Ryan Eddington (10), Jack Benge (12) and Topher Ferris (11) take off from the starting line at the Nike Cross Country Regional race Nov. 14.

235 runners representing 28 schools crowded the starting line at the 2021 IHSA state meet at Detweiller Park in Peoria, Illinois. Surrounding them were the shouts of excited parents, determined coaches, and cheering classmates. The purple-clad runners of DGN formed a pack and took their marks as the crowd screamed.

Despite the sensory overload brought on by the state meet, the runners and coaches of the DGN boys varsity cross country team remained unfazed. The state meet is a familiar environment for the team; they have finished in the top three a total of three times since 2013.

“The environment for the state meet is always ‘high energy.’ However, there isn’t any reason to hype up the state meet and change the way things are done for one race of the year,” assistant coach Jillian Russell said.

The team was confident going into the meet and aiming for another top-five finish. Senior Kyle McNally, who was out for much of the season with an injured hip flexor, experienced a range of emotions during the meet.

“Before the race, everyone was nervous but also pretty excited as it is probably the most fun meet to race at,” McNally said. “During the meet, it was pretty chaotic, you’ve got hundreds of [spectators] filling up hundreds of meters screaming at you while you are trying to get past [other runners].”

“In the postseason, I’ve learned that I can be a little more aggressive with my running. I’ve found that I can be pretty effective as a frontrunner, so I just went with it and was not afraid to take [the strategy] to the course,” Llewellyn said.

Head coach John Sipple was impressed with Llewellyn’s gutsy performance during the race and looks forward to seeing his future development as an athlete.

“You could see it was getting pretty hard in the middle [for Llewellyn], but he was able to regroup and find some extra energy. He ran an awesome second half of the race,” Sipple said. “I think he’s really starting to discover how good he can be.”

Within the first 500-meters, Caden and I took a hard fall around a sharp turn from another kid that had fallen as well. We did get stepped on and brought back some scars back with us to Downers Grove.”

Strong performances by the seniors were paired with the efforts of junior Topher Ferris and sophomore Caden Weber, who bounced back after getting knocked over early in the race.

“Within the first 500-meters, Caden and I took a hard fall around a sharp turn from another kid that had fallen as well. We did get stepped on and brought back some scars back with us to Downers Grove,” Ferris said.

Despite the strong showings, the Trojans were unable to edge out first place finisher Sandburg. Sipple and Russell not only know the Sandburg coaches from competition, but have bonded as training partners.

“The head coach at Sandburg, John O’Malley, is Sipple’s high school teammate,” Russell said, “The other two Sandburg coaches are two guys that I have personally trained within the past few years. I ran a few marathons a few years back, and those three guys helped me train for the Boston Marathon and we built a strong friendship.”

The Nov. 14 Nike Cross Country Regional race in Terre Haute, Indiana provided another opportunity for the teams to face off against each other as well as other schools and running clubs from across the Midwest. DGN took third place once again, beaten only by Sandburg (1st place) and Black Robe Running Club (2nd place), an Indiana club team.

“Our finish would have most likely qualified us for Nike Cross Country Nationals in which we would be flown out to Oregon, but we’ll have to deal with it. It’s been an absolutely amazing season with these guys,” McNally said.

All members of the varsity team plan to compete on the track and field team this spring and look to continue their winning tradition. Runners compete in distance events ranging from the 400-meter race to the 3200-meter race, with each runner typically specializing in a specific event.

Regardless of the different races each runner is competing in, Sipple, who is also a track and field coach, holds the team to the same high standards as he does during cross country season.

“The expectations [of the team] evolve with what [the runners] want to do, what they’re trying to accomplish and also how the season plays out. We’d like to think that there’s a fair amount of those guys that can qualify for the state meet,” Sipple said.