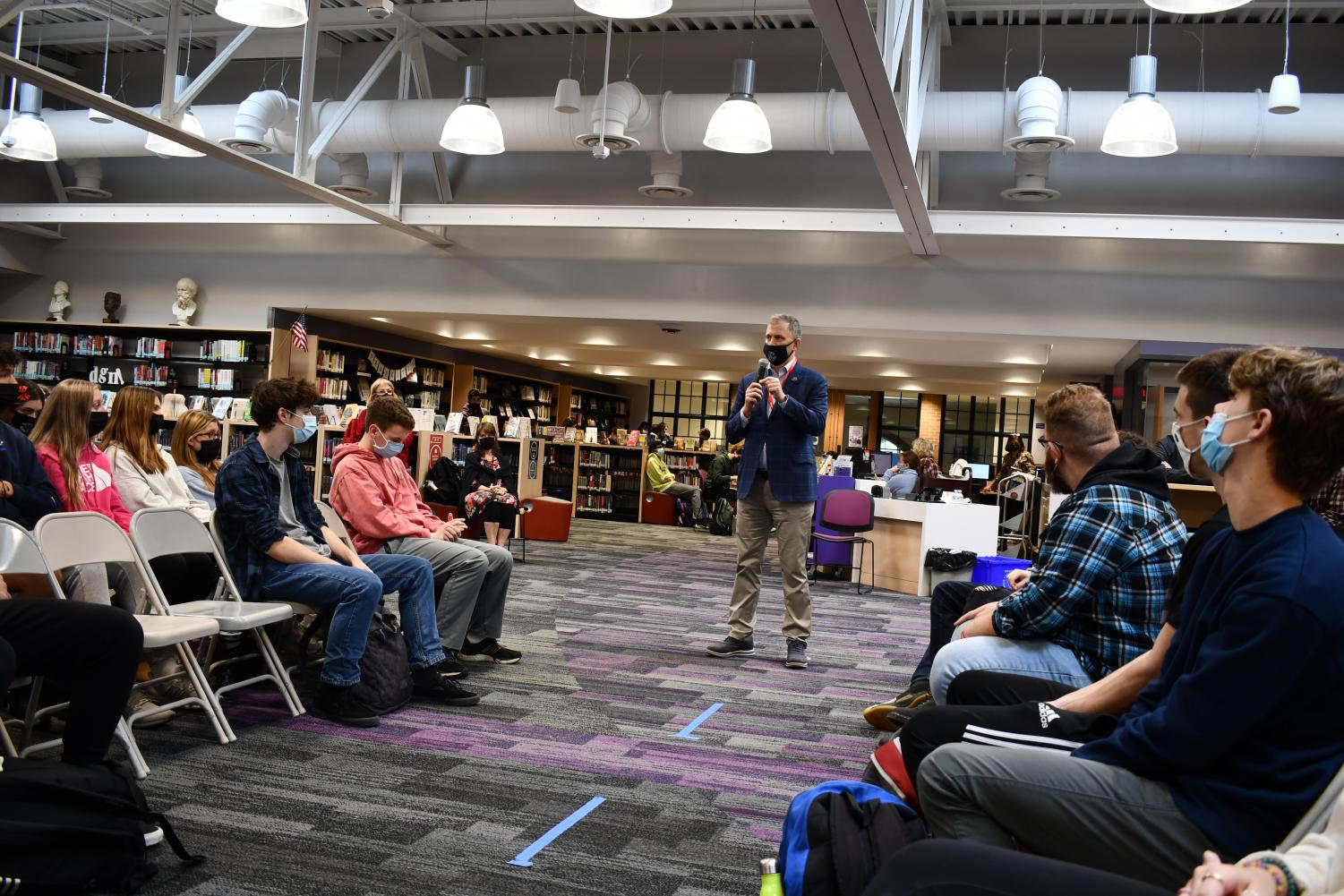 Representative Sean Casten visited DGN Nov. 29 to hold a lecture about many issues regarding the climate, economics and technology. Casten engaged with students about various issues relevant to Casten’s congressional district and the country as a whole.

After Casten’s lecture, Omega editors were given the opportunity to interview him “I just love coming out and meeting with high school students. Frankly, I always find I get vastly better questions from high school students than adults because you guys are studying the Constitution and taking AP Government.” Casten said..

Casten emphasized community involvement as a positive outlet for young people. “Your participation, civically, goes way beyond whether or not you vote. You may volunteer at the local food pantry, maybe you’re involved at your church or mosque, wherever that is, maybe you’re an Eagle Scout. There are all these ways that our communities are stitched together,” Casten said. “As for social media, my general rule is that if you are in a room, whether that’s a real room or a virtual room where everyone agrees with you, leave the room because you’re not going to learn anything. So much of social media is designed to amplify and pull you down rabbit holes. Get your media from wherever you get it from, but make sure you’re getting media input from people that make you think.”

Despite coming from a political background diametrically opposed to Casten’s, junior Declan Moore, who identifies as a conservative, believes that the media can often play a harmful role in influencing its consumers;

“I feel like both sides of the media are entitled to their opinion and I think both sides are guilty of trying to make the other party look bad. If both sides reported strictly the news I think we would have a lot more answers then we expect, but sadly I don’t think that’s going to happen,” Moore said.

Young Conservatives of America president Abby Streff sees the media as divided and overly partisan. “I think a lot of the media [is] split between the two [political sides]. But I do think some medias [outlets] give an overarching story, like with Kyle Rittenhouse” said Streff.

Senior Lizzie De Silva, who describes herself as moderately liberal describes how teens may face bullies on social media “Having Instagram and Snapchat for a little over a year, I have noticed people are not afraid to call you out on social media, but as soon as you are in a room with them it is dead silent. I feel like bullying isn’t a thing; it’s more cyberbullying,” De Silva said.

Outside of his social commentary, Casten prioritizes climate change as one of his top political concerns. His website mentions that he believes he can help lower carbon emissions and create jobs while doing so. Casten himself is a former scientist, and led businesses that focused on clean energy.

He is a member of  the Select Committee on Climate Crisis, a congressional committee that focuses on environmental issues. He recently went on a trip to Europe with former president, Barack Obama, and other members of the committee to address and advocate for climate change.

Streff disagrees with Casten on climate change. “I think the climate does change, but there is research that the climate is changing at .5% or a very small number, so I don’t think it’s a very serious issue but I know some people think it is.” Streff said..

On the other hand, Moore disagrees. “I don’t think it’s the biggest issue in the world; I think there are far bigger things to focus on as far as Illinois goes. But I do think it’s an issue and I think he has every right to be concerned.” Moore said.

From a different perspective, De Silva strongly believes in climate change. “I think it’s a real thing. Gas, greenhouse, literally stuff we do everyday affects the climate. We need to find more ways to help the outdoor world because we can’t be sheltered all the time–that’s not what humans are made for,” De Silva said.

Casten then touched on his re-election campaign, which will be his most competitive since he was first elected in 2018. The state of Illinois has lost a seat in the House of Representatives, and congressional districts have been changed; for Casten, this means he now has to compete with fellow Democratic Representative Marie Newman.

Though Casten has made a name for himself, not every student is satisfied with his political views. “Someone with very strong Democratic views in general makes me worried,” Streff said.

Even with these thoughts DGN students and all individuals living in the district, Casten understands and acknowledges all of his supporters views. He knows how much his district counts on him, even the ones that can’t vote.