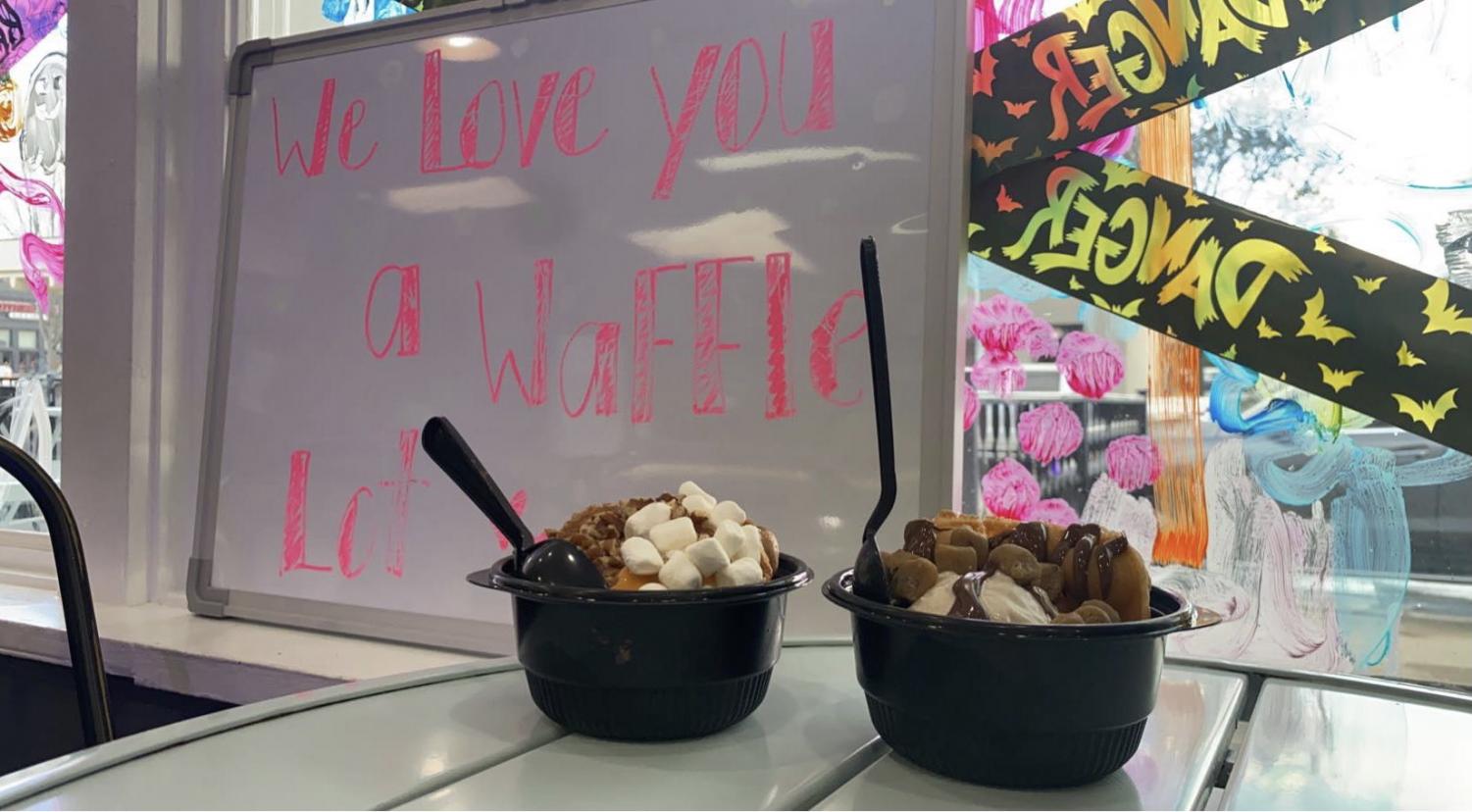 FALL FLAVOR: Both the bowls and the restaurant decked out in fall ornaments. (Photo by Maeve Dietrich)

FALL FLAVOR: Both the bowls and the restaurant decked out in fall ornaments.

When it comes to fall, Eiffel Waffle is doing things correctly. As an ice cream employee myself I am a tough critic, but I was not disappointed with what went down in this fairly new establishment downtown Downers Grove.

As I walked into Eiffel Waffle, I was overwhelmed with the smell of newly cooked waffles. I had never been to the establishment before, and I was welcomed by a decked-out shop and Halloween hits ringing in the background. The singular employee working was patient with me as I chose my flavors.

From what I picked up, the bubble waffle is a scoop of ice cream, topped to suit the flavor, wrapped in a breakfast waffle. Picking my poison, I went with the Pumpkin Dream bubble waffle, and a build your own bubble waffle that consisted of the seasonal cinnamon ice cream, Nutella, and cookie dough.

The preparation time from the time I paid and the time we were presented with our dishes were under four minutes, which was quite impressive with one person on the clock.

I dipped into the Pumpkin Dream first, going for a spoonful of mainly the pumpkin piece ice cream with a dash of whipped cream, pecans, marshmallows, and caramel drizzle. The ice cream itself was very flavorful but had too much spice for its own good. The marshmallows seemed to be on their last leg and were a little stale. Definitely, something I could have gone without. Something with the consistency of a marshmallow drizzle would have been more suitable.

Pecans are normally not something that I would prefer in ice cream, but I have to say that the crunchy texture was a supplemental piece of this specific bubble waffle. The flavor of the topping did not add much to the entire dish. The caramel added a nice touch but did not overpower the already strong pumpkin ice cream. The pumpkin-flavored waffle was my favorite element of this bowl. Its warmth brought its fall flavor to the next level and complemented the caramel very nicely.

Then I tasted my personally-crafted build-your-own bubble waffle. After the tang of the pumpkin pie, I was expecting a hefty cinnamon piquancy. What I ended up experiencing was a vanilla ice cream with a dash of cinnamon sugar rather than cinnamon ice cream. The cookie dough and  Nutella spread complemented the cinnamon well, so that was a solid choice on my part.