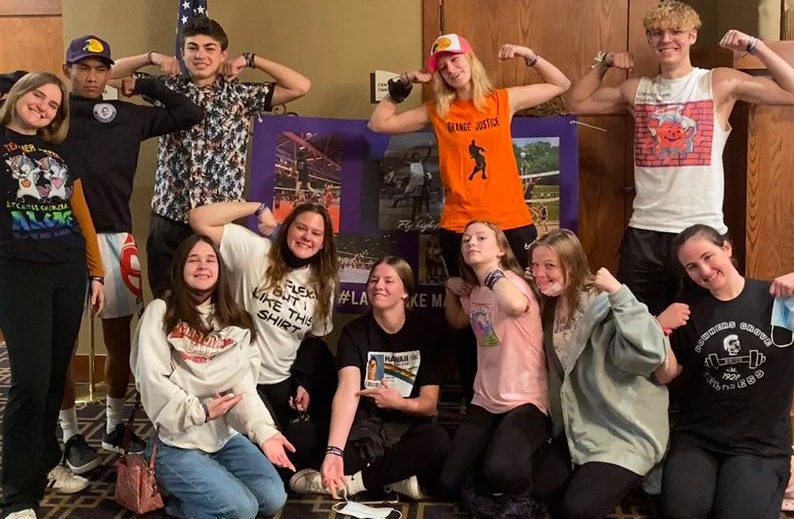 FLEXING FOR MASON: Mason’s friends dress in athletic wear per request of family for wake. (Photo by Allie Bojkovski)

FLEXING FOR MASON: Mason’s friends dress in athletic wear per request of family for wake.

“Even if you were not close friends with Mason, he still wanted to talk to you, [and] wanted to know how your day was. He just loved people so much, and everyone loved him back,” close friend senior Kat Rutkowski said.

Mason Walters was a senior at DGN who tragically passed away Sept. 28. Walters, a beloved student, was involved with the school through the AVID program and volleyball team.

Mason’s friends describe him as the type of person who would say something as a joke but actually go through and pursue it.

“Mason and I would always joke [in] the weeks leading up to starting school that we have to throw pennies at Alyssa since she’s a freshman. And he always did,” Mason’s girlfriend, senior Kate Laffey said.

Mason’s sister Alyssa Walters shares a story when he picked her up from volleyball practice.

“And so I walked out and he got out of the car in the middle of the parking lot and he was waving. Mason said ‘I’m right here, Alyssa!’ and I walked over. Then he takes some pennies out of his pocket and starts throwing them at me,” Walters said. “He followed through with everything.”

Mason had a carefree soul, and students remember him acting on impulse to make the most out of experiences.

“He had the weirdest ideas, but everybody kind of went with it. And he made things seem like there were no consequences,” Laffey said. “You would want to be spontaneous when you were around him too because it was fun.”

From a memorial in the parking lot to sending off dozens of balloons at a sunrise, students initiated various events to honor Mason. Freshmen, sophomores, juniors and seniors alike came out to show their support for each other through these tough times.

A day after Mason passed, his close friends organized a gathering at the Main Street parking lot to share stories. People brought flowers, sidewalk chalk, and jugs of water (because Mason always had a gallon of water with him).

After people shared memories, senior Emily Hernandez passed out chalk for students to write messages around the school.

Laffey appreciated the amount of people who came out to help celebrate Mason’s life.

“I think it was really, really sweet to have people there and just you don’t realize when something like this happens, how much of an impact somebody had on you, even if it was the smallest thing,” Laffey said. “I know so many people who had a class with him and who he talked to everyday.”

Mason was one of senior Allie Bojkovski’s first and best friends in high school. They had first started talking together in their English class and for her, seeing the messages written on the sidewalk was an emotional process.

“I’m not going to lie. It was so cute. And I really like how they put the ‘We heart you Mason’ right next to the ‘We heart you Betty’ sign,” in reference to the spray-painted message in honor of Beth Dunlap located at Main street. “Also, there is a water jug right next to a little volleyball and that is still there,” Bojkovski said.

The morning of Oct. 1, students came together again to release balloons at sunrise in honor of him before going to school.

“I liked it. Some people said that they didn’t really know Mason that well, or that long, but his presence made an impact on everyone,” Mason’s sister, freshman Alyssa Walters, said.

Another one of Mason’s biggest interests were cars, so they held a car show Oct. 14 in the Main Street parking lot. Additionally, hundreds of silicon wristbands were passed out inscribed with the saying ‘Laugh like Mason’ and MW72, 72 being his club number for volleyball, written on the bracelet.

Students wanted to make a football game theme honoring Mason, so at the pink-out game people bought pink bass pro hats, or turn their shirts into cutoffs, in honor of Mason’s classic fashion.

“If Mason was at that game, he would wear a pink cutoff and a pink bathrobe. He would’ve probably also painted himself pink. That’s the best way to honor him,” Rutkowski said. “Not just saying [the game] is for Mason, but, doing something Mason would do to keep moving forward… bringing him with us.” 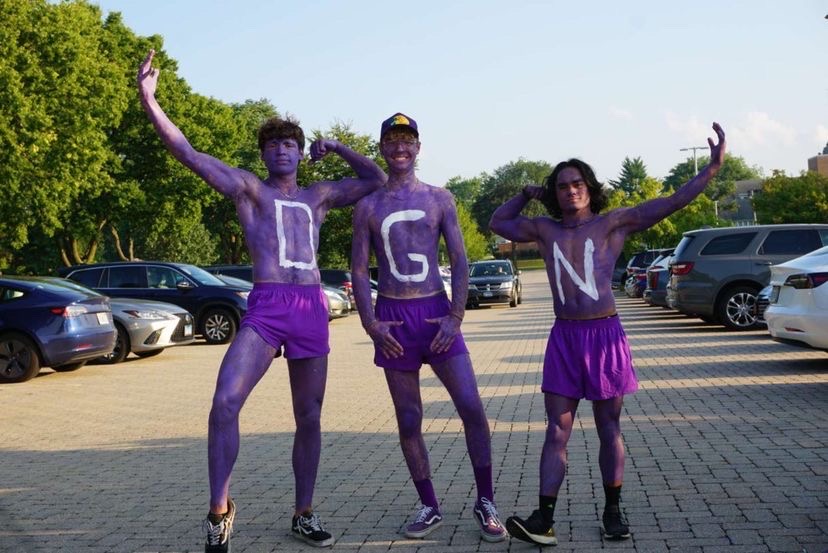 DGN
ALL OUT: Mason, Erik Radzavicius (12), and Tyler Llaneta dress up for the first football game.
'Big Cat'
Senior and teammate Jason Bunales recalls the time where Mason got the nickname ‘Big Cat’. “Last year, there were a lot of volleyball players in the same Fitness 2 P.E. class. He would be flexing all the time and he's giant, but we would always call him tiny as a joke,” Bunales said. “The energy that he had was amazing.” 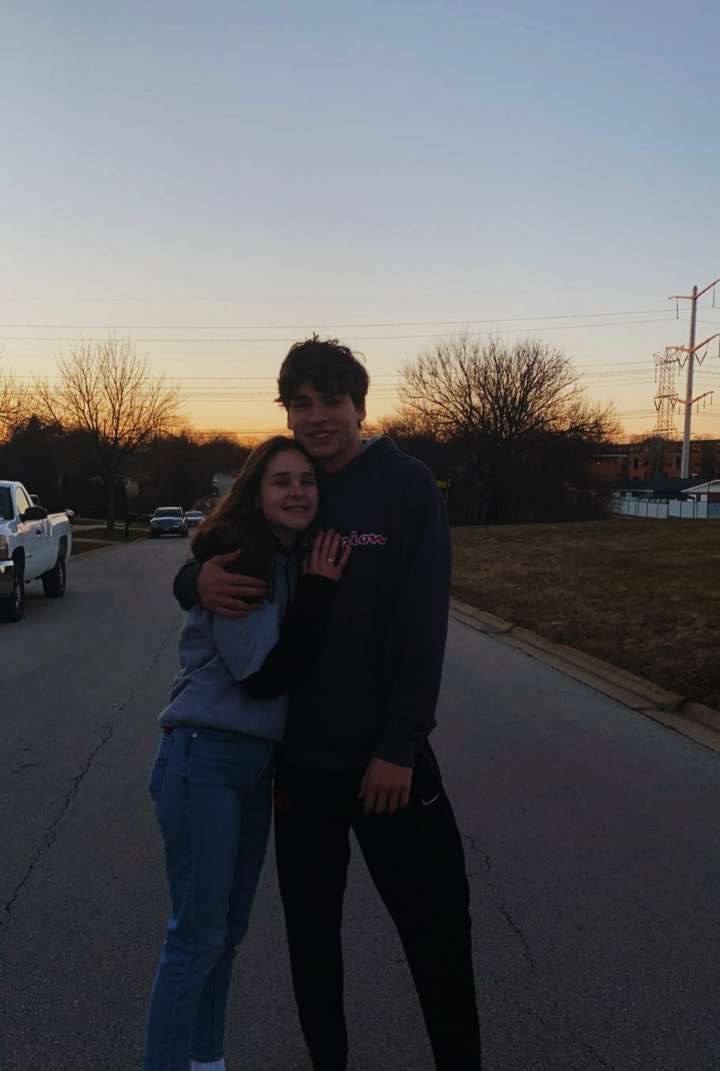 Kate and Mason
POSING: Kate Laffey (12) and Mason pose for a picture together at sunset. "This was his favorite picture of us," Laffey said.
Small details
Kate Laffey recounts the attention he paid to small details, “I had these crusty, Christmas lights in my room and half of the strands were burnt out. Mason wanted to try and fix it or get me new lights. That was a conversation we had like two months ago. He ended up getting me these LED lights, and he just always remembered the smallest things. It was a two minute conversation, not even. He always paid attention to the small things and actually listened, which was very important to me,” Laffey said. 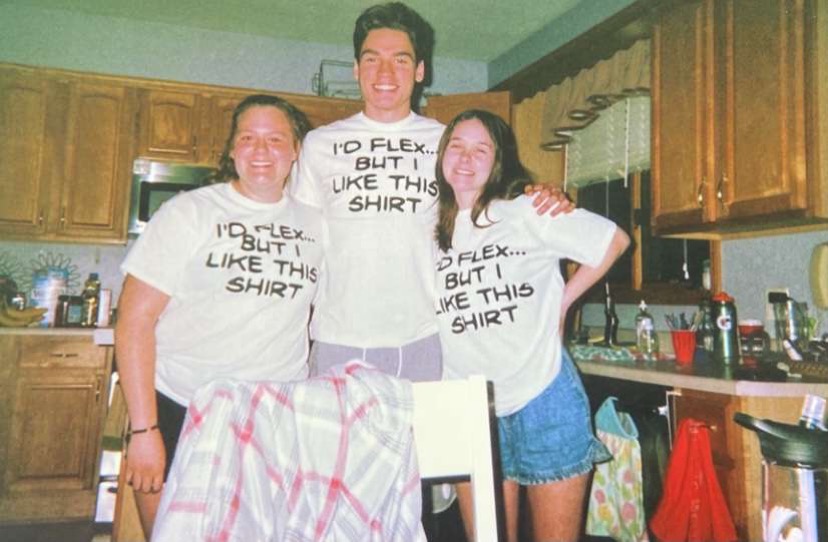 Disposable photo
MATCHING: Allie Bojkovski (12), Mason, and Kate Laffey (12) take a disposable photo all wearing the same shirt.
Support
Close friend Jacob Aboutar hurt his back over the summer and remembers Mason’s support through it all. “He came to my house every single day and would walk into my room and we would start playing video games. He wouldn’t even tell me he was coming over, he would just show up.”
Leave a Comment