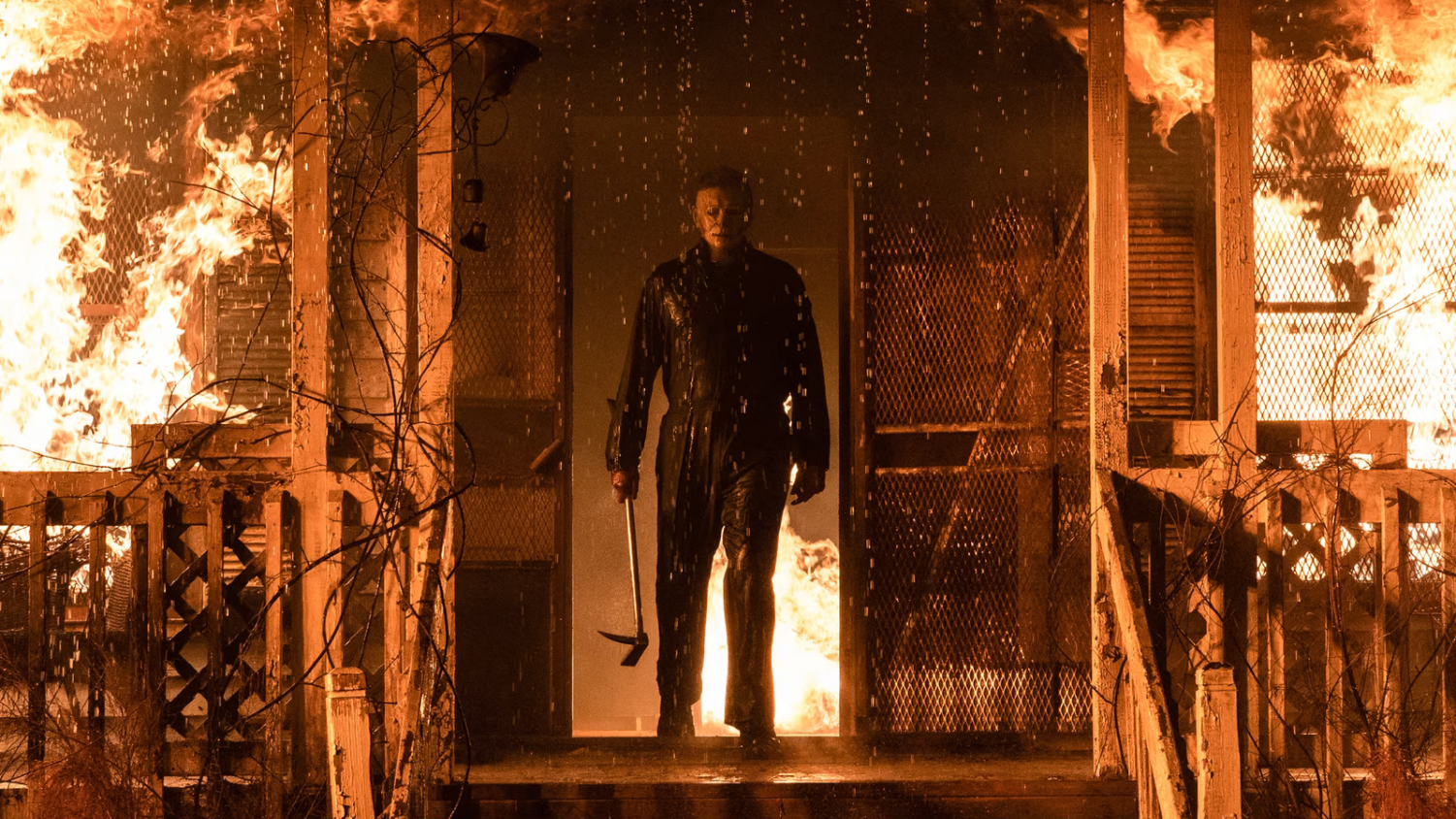 YOU CAN’T KILL THE BOOGEYMAN: Masked maniac Michael Myers (portrayed by James Jude Courtney, Nick Castle and Airon Armstrong) emerges from the blazing compound of Laurie Strode (Jamie Lee Curtis), in which Strode unsuccessfully burned him to death at the end of 2018’s Halloween. (Photo Courtesy of CinemaBlend)

YOU CAN’T KILL THE BOOGEYMAN: Masked maniac Michael Myers (portrayed by James Jude Courtney, Nick Castle and Airon Armstrong) emerges from the blazing compound of Laurie Strode (Jamie Lee Curtis), in which Strode unsuccessfully burned him to death at the end of 2018’s Halloween.

You can run, you can hide—but you can’t kill the boogeyman.

Before I discuss my thoughts on Halloween Kills, it is essential to note that it is a very different movie. Being a major slasher and thriller fan, I have seen my share of horror movies, but Halloween Kills is by far the most alarming, shocking and dynamic one I’ve ever seen. This film is so beautifully complex and overwhelming that even after seeing it over 10 times, I am still shaken and in love with it.

Acting as the second installment of the current Halloween trilogy, Halloween Kills picks up right after 2018’s Halloween. Whereas the 2018 film focuses on the trauma of iconic character Laurie Strode (played by marvelous Scream Queen Jamie Lee Curtis) 40 years after psychotic killer Michael Myer’s reign of terror in the original 1978 Halloween, Halloween Kills zooms out to examine the boogeyman’s scarring effects on all of Haddonfield, the film’s central setting.

Laurie spends most of the film recovering from the severe injuries Myers gave her at the end of 2018’s Halloween; however, her daughter, Karen (Judy Greer), and granddaughter, Allyson (Andi Matichak), carry her vengeful torch and lead much of the action in the film.

Viewers also experience the return of several characters who directly experienced the mayhem Myers caused in 1978’s Halloween. Everyone from Tommy Doyle (The Breakfast Club star Anthony Michael Hall) and Lindsey Wallace (The Real Housewives of Beverly Hills star Kyle Richards) to nurse Marion Chambers (Nancy Stephens) and Lonnie Elam (Robert Longstreet) unite to try and take Myers down, once and for all.

From the very beginning, never-ending action dominates this movie. Within only moments of watching the film, audiences witness Myers slaughter a crew of firefighters with inhuman brutality, Laurie getting surgery and Karen, who had kept emotionally strong for her family in 2018’s Halloween, burst into tears after realizing Myers had murdered her husband. Throughout the rest of the film, an enraged mob, profound revelations and an endless series of kills from Myers take the reigns as viewers watch at the edges of their seats in utter terror and shock.

However, those seeking to watch this film should prepare for some of the goriest, most disturbing kills in the history of horror. Myers has always had a clever yet sick way of butchering his victims, but in Halloween Kills, it is by far the most baffling—not even the fact that Myers murders a child in this movie is the most concerning part of it. From gracefully shanking multiple kitchen knives into an older man’s back while his wife watches on the floor, bleeding out, to positioning a couple’s corpses in the same way they had posed in a romantic photo, the kills in this film are discomforting, messed up and agitating alike.

Moreover, Halloween Kills contains the highest sense of emotion and intensity ever seen in the horror genre. Perhaps this is because the mob in this movie is so realistic and compelling. Their sheer despair at Myer’s contagious destruction drove them to execute disturbingly lifelike actions not unlike those seen during the Capitol Hill riot—something Curtis herself pointed out. Or, maybe it’s this film’s constant transition between the themes of terror, love, family, bravery, kindness and hatred that affect viewers so profoundly. Either way, skilled writer and director David Gordon Green knew how to make this film evoke genuine fear, not only in his characters but his audiences as well.

That said, one thing that is blatantly responsible for the terror and excitement this movie instills its viewers is its music. Designed by legendary composers John and Cody Carpenter and Daniel Davies, the soundtrack of Halloween Kills contains traces of the classic Halloween theme mixed with intense chords, rhythms and notes never before reached in the Halloween franchise’s music. The moving score in Halloween Kills adds to its energy and emotion and causes even disinterested viewers to shiver.

In essence, though, Halloween Kills might be one of the most violent, realistic and thrilling horror films, but it also has much to say about the world. From heartwarming sacrifices and motherly love to the impact of regret and the power of honesty, viewers gain insight into many significant themes. At the same time, this film demonstrates just how much a community can change in the face of panic, terror and chaos. Halloween Kills shows us how even the brightest of humans can transcend into the wickedest of monsters, thirsty for blood and hungry for battle.

It just takes that one bit of fear to transcend.