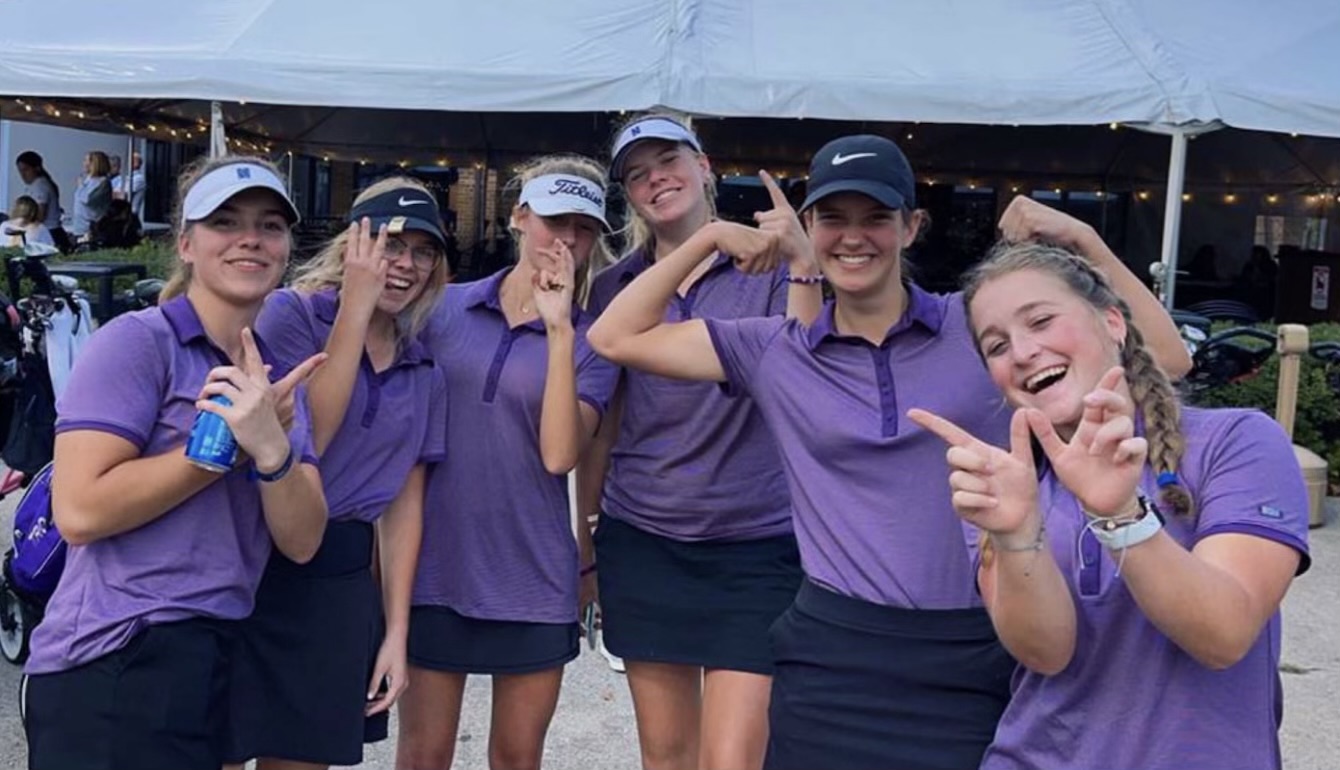 DUBS ONLY: Members of the girls’ varsity golf team celebrate after winning their sectional meet at the Village Greens golf course in Woodridge. (Photo by Jacqueline Mccormick)

DUBS ONLY: Members of the girls’ varsity golf team celebrate after winning their sectional meet at the Village Greens golf course in Woodridge.

The varsity girls’ golf team advanced to the state championship for the first time since 2015 when they finished 10th. The girls placed third in their first invitational of the season, Plainfield North, and won the second Homewood Flossmoor invitational, setting them up for their journey to state. This year, they traveled the two and a half hours to Decatur, Illinois where they placed 12th in the state tournament.

The varsity girls’ golf team left school most days during eighth period to begin their practices, and the players missed several days of school to attend various invitationals.

“This year was especially hard to miss classes because I’m taking more AP classes than I have any other year. I missed four days of school total for conference, regionals, sectionals and state,” senior captain and varsity golfer Jessica Cagney said. “I have to communicate with my teachers and friends in order to understand what I missed or find a time to make up quizzes and tests.”

This season, the golf team put in the hours at practice and built up team chemistry, yet their state achievement was somewhat unexpected.

“I was so happy and proud of our team because we weren’t even supposed to make it past regionals. It was definitely a surprise to make it [to state], but all of us were very excited,” senior captain and varsity golfer Maeve Miller said.

With tough competition such as Hinsdale Central, who has a history of beating them at almost every matchup, the girls looked to secure the second-place spot at regionals and sectionals, and the players pushed past any bad matches.

“The hardest part of making it to state was believing that we, as a team, were capable of competing against the skilled golfers we were faced with. One bad round of golf can really get in your head; the best thing you can do is move on and learn from your mistakes,” senior captain and varsity golfer Mandy McGinn said.

Through the several weather challenges of the season, such as a dense fog advisory that delayed the first day of the state meet, the girls persevered and kept their spirits high.

“I am proud of our success but am most proud of the girls and how they approached each step of this journey. We never got too serious and enjoyed each day of this season,” varsity coach Jacqueline Mccormick said. “I am proud of all of our golfers and the integrity they showed both on and off the course.”

For the golfers, staying focused and perfecting every swing was challenging at times. Given the dense fog on the morning of the state meet, the ground was still wet when the teams began to tee off. This meant that the balls would not roll as far, meaning the golfers had to concentrate and calculate each move.

“The hardest part of making it to state was staying locked-in the entire season and not getting in my head. Golf is a very mental game and can become challenging when you get too lost in it,” junior and varsity golfer Ruby Bartkowiak said. “I’m really proud of my team for being able to push through any bad matches we had and being able to play our best when it really came down to it.”

For many of the seniors on the team, making it to state in their last season gave great closure to their high school golf careers, especially given their irregular season last year due to COVID-19. However, for Bartkowiak, making it to state meant something different.

“I lost my grandpa last summer, but the Christmas before he had given me his putter. During the state tournament, I was able to finish under the average amount of putts, so it meant a lot to me that I was able to do that in honor of him,” Bartkowiak said.