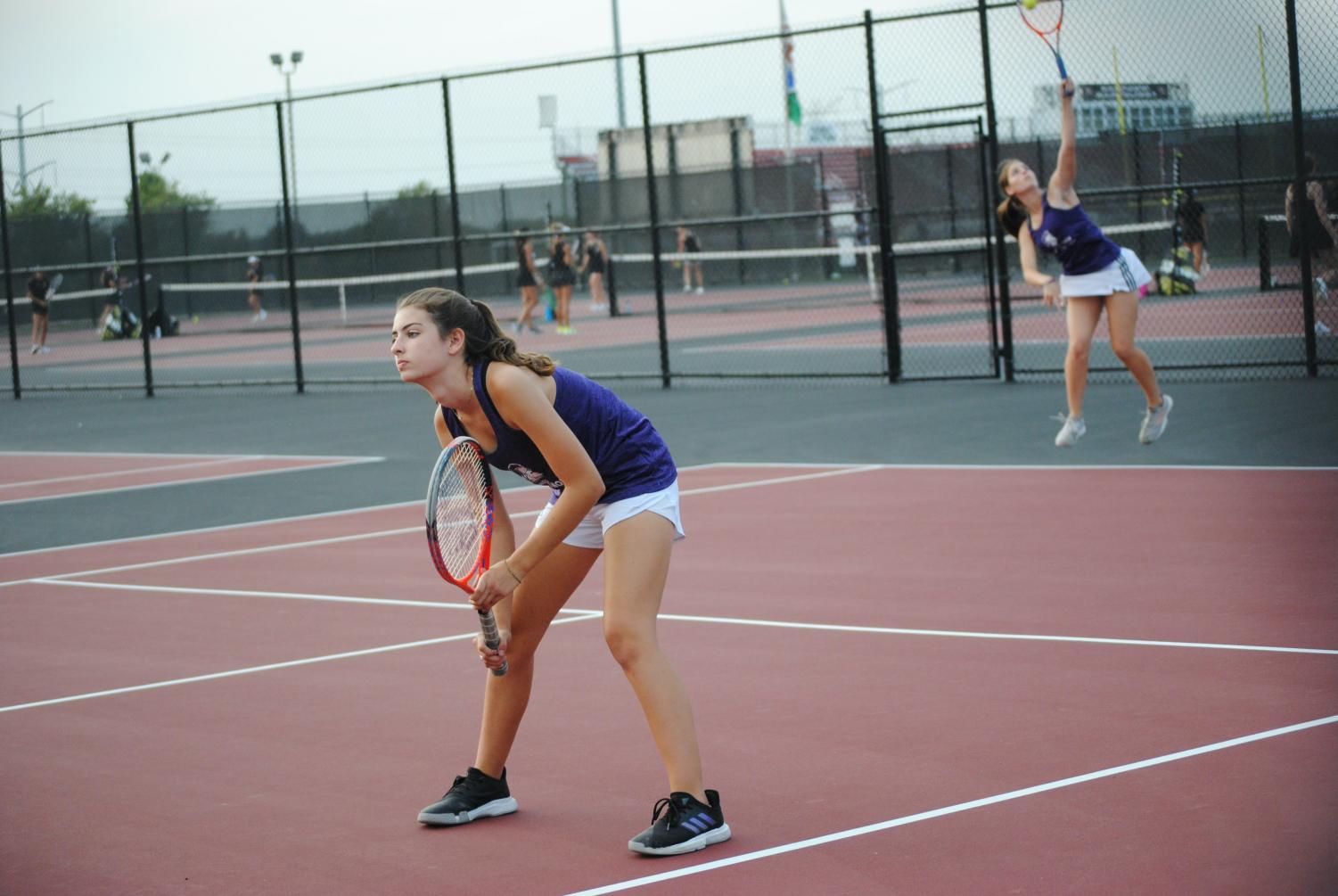 ON THEIR TOES: Meghan (front) and Kate (back) Southworth compete in a doubles match against St. Charles East. (Tabitha Irvin)

ON THEIR TOES: Meghan (front) and Kate (back) Southworth compete in a doubles match against St. Charles East.

Junior Kate Southworth has played on the top doubles court for the girls’ varsity tennis team since she was a freshman, but this season she shares the court with her sister.

Although they grew up practicing together, the sisters are now embarking on their first competitive season as partners.

“We’ve practiced a lot together [in the past] but it hasn’t really been on the same team, we’ve more so been versing each other to get a sense of each other’s skill levels,” freshman Meghan Southworth said.

The Southworth sisters’ off-court connections translate into their on-court play, allowing them to feel comfortable during matches.

“We have really good communication because I would say we are pretty close as sisters, so that makes it easier to work as a team on the court too,” Kate said.

Head varsity tennis coach Dana Graczyk believes that although this is the sisters’ first time playing doubles together, both their physical and emotional playing styles help balance each other.

“Kate is a smarter, more vocal, more mature player [this year]. She is very helpful in encouraging Meghan,” Graczyk said, “Kate is a lefty and Meghan is a righty. They compliment each other’s game style quite well.”

Being in high school together has brought the sisters closer, and playing doubles together has been an extension of their relationship.

“It’s fun to be part of something that she’s a part of, especially because I’m the youngest and being connected to her and to my older siblings is a great experience,” Meghan said.

Kate and Meghan aren’t the only pair of sisters who are doubles partners this year; junior Nora Casey and sophomore Mary Kate Casey play on the doubles court for the JV tennis team. Although this seems like a coincidence, Graczyk, who coached sisters Theresa and Mary Margaret McMann in 2014, points out that it’s not unheard of.

“It is common for siblings to play doubles together, they understand the game and each other,” Graczyk said.

However, paying with family is not without its challenges. Both the Southworth and Casey sisters have their own way of communicating. Having sisters as partners, Graczyk believes it can sometimes cause conflict.

“A weakness could be that because they are siblings they could argue more easily and have to go home and they may take the match home with them,” Graczyk said.

Nora describes a point in a match played on Sept. 20 in which she and Mary Kate were mad at each other but used it as a way to improve.

“During the game, we were far from winning and I began to get extremely frustrated with her because it’s easier to get mad at your sister rather than another teammate,” Nora said. “However, I think this frustration fueled our comeback in the game because we both became more aggressive and wanted to win even more.”

Nora and Mary Kate haven’t been consistent partners this year, but have been paired up more recently.

“I was excited when I heard we were paired together because we’re both strong in different areas of tennis,” Mary Kate said. “I’m happy to share the win with her because our mom is happy with both of us when we do.”

Meghan and Kate wish to excel in the state competition this year and look forward to continuing their unique dynamic.

“I just hope to play with her again next year, I’m having a lot of fun on the team,” Meghan said.