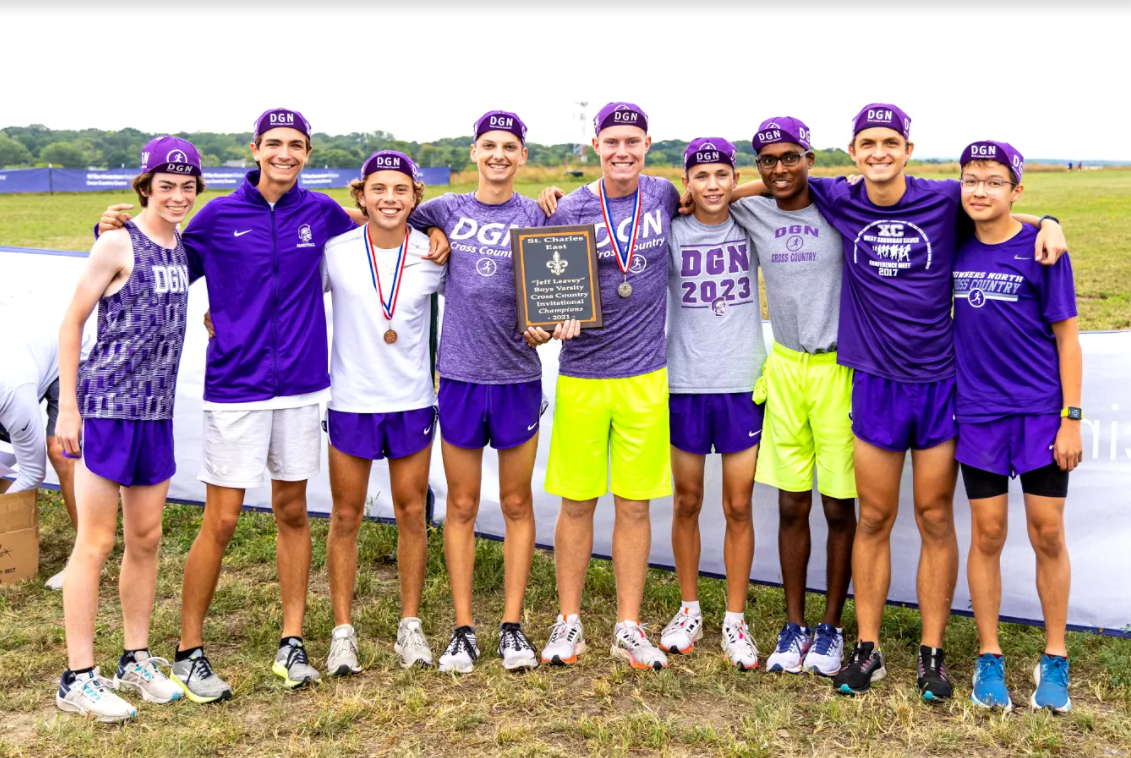 SHOWING OFF THE WIN: Varsity boys’ cross country team poses with their first place plaque at the St. Charles Invitational.

At DGN, the boys’ varsity cross country prioritizes team togetherness. Somehow, they are always together, doing an activity that is foreign to many; running for pleasure and competition. You may have seen them running through the Pierce Downer neighborhood, shirtless in their short-shorts and Brooks’. They’re not crazy, “It’s just not like other teams,” junior Topher Ferris said, shrugging his shoulders.

Inclusion and sportsmanship guide the dynamic of the team. Ferris is familiar with their traditions and values after running in a varsity race freshman year and making varsity permanently the following year.

“We try to include everybody,” Ferris said. “I wasn’t on the team yet but when we won state in 2017, Coach Sipple requested that all the guys’ names be put on the trophy, not just Varsity.”

Gathered around a campfire, the team has their annual meeting to discuss goals of the season. Activities like this and frisbee are things that bring the boys together outside of practice.

“At the bonfire, we create a new motto each year so that in a way, everybody’s new to it, even upperclassmen on the team. It plays into how we go about things,” Ferris said.

The team motto is a phrase that’s often seen on the back of team t-shirts or can just be heard in conversation among the team that oozes culture.

“One major motto is ‘FTFB’, for the freaking boys,” Ferris said with a grin.

Cross country is unique from other sports in the way that there is one individual winner per race. In larger competitions, there can be up to sixty teams and five hundred runners. With those odds, the sport is more so about self-improvement. When you can’t win the race, you can always beat yourself.

“The reality is, the vast majority of the time you compete, you fail and that failure is okay,” said Varsity Coach, John Sipple. “As a team, we want to help kids become closer and care about each other but much of it has to take place organically and requires kids to leave their own egos behind.”

In having this legacy of friendship, the coaches are a big factor in the cooperation of the team. Year after year, race after race, Coach Sipple makes sure the guys begin and end everything as a team.

“Our coaches instill that you be the best person you can be both in the classroom and on the course. They bring the team together,” Christine Ferris, mother of Topher Ferris said.

Running miles upon miles together every day brings a team together. It’s not just the collective time that bonds the boys, it’s pushing each other. They compete, develop, learn, and work while jogging shoulder-to-shoulder.

“You need the support of your teammates, and these guys do just that for each other,” Mrs. Ferris said. “It’s not just a sport, it’s a lifestyle.”

At DGN, students are aware and proud of their successful and dedicated cross country team. Being seen jogging around town together daily, the boys are always together. However, they don’t necessarily adore running, but they do love the boys.

“A common stereotype about the cross country guys is that we all love running. Most of us hate running but either love the team, have nothing else to do, or couldn’t make other sports teams,” junior Leo Gartlan said.

However, like any team, there are ups and downs that bring the team together. With a team this tight-knit, they are able to communicate and overcome disagreements.

“The team has definitely disagreed on who the leaders of our team are. We have many young guys who thought they could come onto varsity and be leaders when in reality leadership takes experience,” Gartlan said. “Therefore, upperclassmen who weren’t necessarily comfortable leading had to step up.”

Part of the boys’ varsity cross country legacy is their unity. This has been a long-term practice and priority of the team.

“A big idea on the team was ‘for the freaking boys’, which really emphasized what we were all about. There was an incredible dynamic of togetherness,” alumni Clark Kelly said.

During Kelly’s run with the program, the team won state for the first time in 2017. Kelly is now pursuing his passion for cross country at North Central College.

Whether they love running or are there for the friendships, the boys continue to impress and be impenetrable each year. Their strive for friendship is reflective of their performance on the course.

“I hope all DGN cross country runners in the future also make many great memories and friends during their time running for the team,” Kelly said.