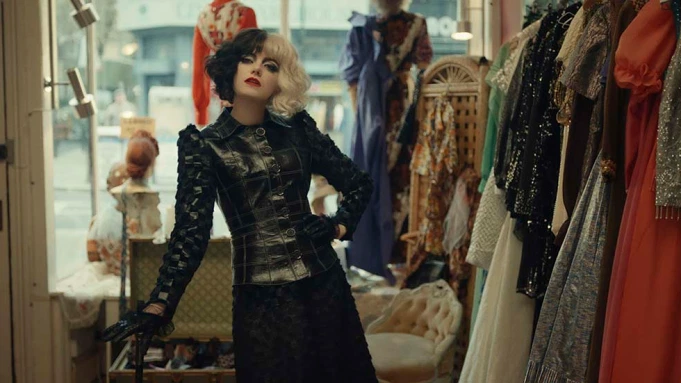 SLY STYLE: Cruella (Emma stone) assumes a mischievous glance at the camera as she formulates her vengeful plan to overthrow her rival, the Baroness (Emma Thompson). (Photo Courtesy of CinemaBlend)

SLY STYLE: Cruella (Emma stone) assumes a mischievous glance at the camera as she formulates her vengeful plan to overthrow her rival, the Baroness (Emma Thompson).

Serving as a prequel to the timeless 1961 Disney tale 101 Dalmatians, Cruella clears the fog around the dog-skinning, fashion-obsessed villain Cruella (Emma Stone) and grants viewers a generous glimpse of her wicked ways’ surprising roots. The audience follows the villainess as she evolves from being a juvenile delinquent and tricksy gangster to becoming an esteemed fashion designer with a passion for vengeance.

Released in theaters and streamed on Disney+ May 28, the film was a major box office success in just its first two weeks following its debut. Although, this fact comes with little wonder, as the film has a seemingly endless list of quality assets.

While it is difficult to know where to begin, one of Cruella’s most spellbinding features is its exquisite, lifelike detail that takes viewers on a journey back in time. Whether it be the free, independent and rebellious natures of several characters or eventful scenes like Cruella’s rock concert fashion show, every aspect of the movie casts viewers back to the 1970s punk rock movement.

Equally worthy of mention are Cruella’s fabulous costumes, which also draw several ties back to the 1970s punk subculture. The film’s talented makeup artist, Nadia Stacey, instilled punk fashion into her work behind the scenes. There, she worked alongside Oscar-winning costume designer Jenny Beavan to conceive the film’s stunning outfits and unique cast of characters. The ripped attire and dark-toned makeup worn by many in the film reflect both the energetic, bold time period as well as the characters’ wild, free spirits.

But while Cruella has a prosperous amount of inventiveness and originality, multiple details reflect aspects of other successful films. Viewers will find an abundance of connections in Cruella to The Devil Wears Prada, especially in the wealthy, cutthroat Baroness Von Hellman (Emma Thompson). However, with the audience likewise observing several well-planned robberies throughout the film, it is difficult for the audience not to see similarities in it to the Ocean’s franchise. Such commonalities make Cruella all the more likable for older audiences.

The one thing Cruella could use some improvement on is its immense length. Specifically, it seemed to carry on way longer than it had to. There were several points where the film could have ended (and where it seemed it would), yet where it just drew out the story even longer. While Cruella was only two hours and 14 minutes, it could have been just as spectacular if it were a bit shorter.

Collectively, though, there aren’t any other critiques. Too many other Disney films feel too weighed down by cheesy songs, juvenile humor and under-developed characters to the point where teenage and adult audiences are left dissatisfied. Cruella, on the other hand, sticks out like a spot on a dalmatian, presenting viewers with a more thorough and enticing representation of a classic villain. In a nutshell, there is no better way to describe this masterpiece any other way than with Cruella’s very own words: “…brilliant, bad and a little bit mad!”