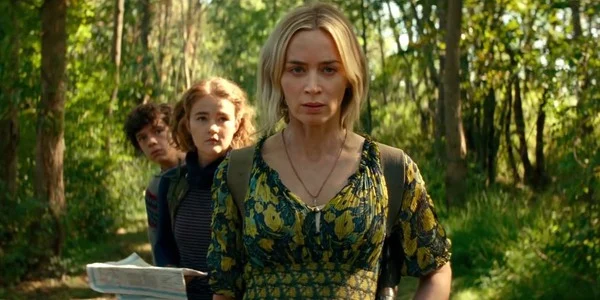 QUIETLY DISQUIETED: Evelyn, Regan and Marcus Abbott (played by Emily Blunt, Millicent Simmonds and Noah Jupe, respectively) commence their search for any other living humans after the film’s infamous creatures wreaked havoc on their home. (Photo Courtesy of CinemaBlend)

QUIETLY DISQUIETED: Evelyn, Regan and Marcus Abbott (played by Emily Blunt, Millicent Simmonds and Noah Jupe, respectively) commence their search for any other living humans after the film’s infamous creatures wreaked havoc on their home.

The creatures that bombarded the Abbott family in 2018’s A Quiet Place are back for another round of devastation. Although, this time, they are more gruesome, brutal and violent as ever in a film with twice the gore and three times the suspense of its predecessor.

A Quiet Place Part II was initially set to release spring 2020 but was pushed back by the COVID-19 pandemic. Already surpassing box office expectations in only three days since its release, the movie is now available in theaters and will stream on Paramount+ later this summer.

Written and directed by talented The Office star John Krasinski, A Quiet Place Part II picks up directly after the events from its preceding film, A Quiet Place. However, the two movies are far from similar, with A Quiet Place Part II being a far more intense, terrifying and revealing entry to the franchise. Viewers not only learn more about the origins of the otherworldly creatures in the franchise but glean a broader glance at the worldwide destruction they caused.

In addition, an award-winning cast makes the movie’s characters all the more realistic and likable. The three central A Quiet Place survivors, Evelyn, Regan and Marcus Abbott (played by the skilled Emily Blunt, Millicent Simmonds and Joah Jupe, respectively), add to the film’s phenomenality. However, the audience also meets an array of new characters, such as Emmett (Cillian Murphy), a family friend who soon becomes one of the main protagonists of the film’s storyline. Krasinski himself even makes a brief cameo in the movie’s stunning first scene.

Nevertheless, what really makes this movie stand out from the first is its clever, lifelike sound effects. To illustrate, viewers experience multiple scenes and shots through the eyes of Regan, who is deaf. During such moments, the film’s audio completely mutes, mimicking the total silence Regan encounters. Not only does this unique feature make the film more authentic, but it also adds to the movie’s overall suspense.

Another thing worth mentioning is the movie’s detailed sets. The film set crew did a remarkable job creating realistic dystopian scenery. Whether it be the run-down steel foundry that the Abbotts take refuge in with Emmett or the derailed, skeleton-filled train Regan discovers, the movie’s sets further immerse the audience in its jaw-dropping plot.

Honestly speaking, A Quiet Place Part II has just a couple of flaws. For starters, there were some scenes and aspects that were a bit confusing. One such part is when a mysterious gang of men attacks Regan and Emmett. There is no information given about this group before or after this incident, leaving viewers puzzled about who the people in it are and what they want. Additionally, the ending was rather abrupt and seemed incomplete, as if the movie suddenly cut off. However, neither of these imperfections are so extreme as to detract from the film’s ultimate grandeur.

While it is not common for horror sequels to surpass the magnificence (if any) of their originals, A Quiet Place Part II did just that and then some. But of course, this fact comes to no surprise with such a gifted mind like Krasinski’s having helped bring this monumental franchise to life. Simultaneously chilling, powerful and downright phenomenal, A Quiet Place Part II is the ideal thriller to watch in this new and exciting era of post-pandemic life.