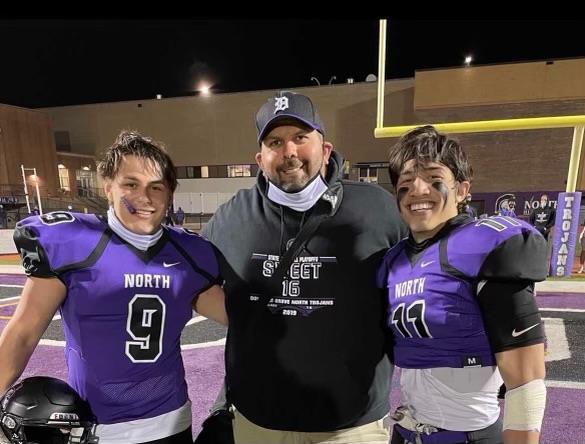 Remembering Coach Pete Lenos: “the glue that kept everybody together”

Beloved DGN football coach Pete Lenos passed away April 29. Lenos’ work as a coach in both the DGN and DGS football programs over the years has had profound impacts on both the students and coaches he competed with. Those who knew him well said his magnetic positivity and ability to connect with others made him an outstanding coach.

“All coaches are very positive and they work towards that as part of their character, but Coach Lenos exemplified that all the time,” fellow football coach Chris Guerrieri said.

Even as a part-time volunteer coach, Lenos’ dedication to the team and the players was unwavering.

“Even if he could only come twice a week, he was still a major impact for our team because his ability to connect with others really made the kids feel valued,” head football coach Joe Horeni said.

Lenos’ was a police officer in his full-time job, but the authority and discipline required for this role never hindered his ability to bond with the players on the field.

“He was at times stern, but we could always share a laugh with him,” sophomore Declan Moore said. “He would always lighten the mood with a joke or two. He definitely had a big impact on my game.”

Lenos’ infectious enthusiasm for the game was felt by not only the players he worked with as a sophomore lineman coach, but by players of all levels in the program.

“Although he never coached me personally, we always joked around with each other at practice and during the games,” senior Eric Petrousek said. “Coach Lenos helped keep football fun.”

His energy on the field was equally balanced with his calm demeanor. Guerrieri and Horeni fondly remember Lenos as being the ‘get back’ coach during games, pulling Horeni back to the sidelines when he got irritated at the referees and relieving frustration during tense moments.

Lenos was an essential part of the program, keeping morale high and making sure that everyone stuck together during tough times.

“Whenever tensions got high, he was the mediator and was always positive and supportive of the players and rest of the coaching staff,” Petrousek said. “Coach Lenos was the glue that kept everybody together.”

The DGN football program hopes to carry on Lenos’ legacy by embodying his uplifting spirit of comradery and dedication.

“This is a guy that played high school football, played college football, has three kids at home, is a police officer, and he still dedicated his time to other kids because of the value that he got out of football. I’ll always keep in mind his giving spirit…I’ll cherish the connection we had that was so close, and that continued family atmosphere that we’re trying to get,” Horeni said.

“For us as a coaching staff, I think he was someone we needed. He was that guy…you can replace a guy that knows X’s and O’s, but you can’t replace a guy that has the connections that Coach Lenos had with the kids. That’s hard to do, and that’s special,” Guerrieri said.