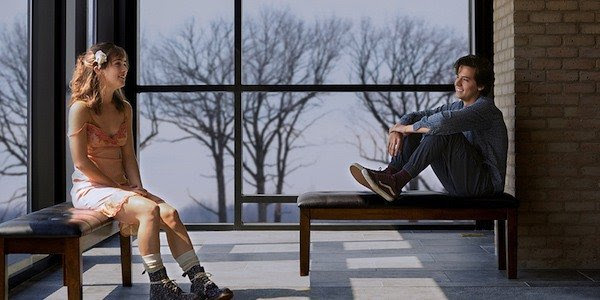 LOVE VS. LIFE: Stella (Haley Lu Richardson) and Will (Cole Sprouse) sit five feet apart as they have to make the decision between being together and or risking their chance at life. Both deal with Cystic Fibrosis, a life-threatening disease, and know the potential consequences to their actions. (Photo Courtesy of CinemaBlend)

LOVE VS. LIFE: Stella (Haley Lu Richardson) and Will (Cole Sprouse) sit five feet apart as they have to make the decision between being together and or risking their chance at life. Both deal with Cystic Fibrosis, a life-threatening disease, and know the potential consequences to their actions.

While strong feelings of isolation and lonesomeness emerged in 2020, the movie Five Feet Apart offers reassurance that others are going through the same. The broader picture of the movie shows the importance of connection and human contact with those you love.

I had my heartstrings pulled on when Five Feet Apart was released in March 2019. Director Justin Baldoni turned this true story into a film, and, similar to the original, it stars two teens, Will Newman (Cole Sprouse) and Stella Grant (Haley Lu Richardson). They share the hardships of living with Cystic Fibrosis.

The film begins by introducing us to Stella. She has spent her life in a box of rules and regulations, to the point dealing with Cystic Fibrosis has become a part of who she is. Instead of living up to her teen years’ expectations, her days are spent trapped in the four walls of the hospital.

The majority of the film’s exposition and rising action is getting to know Stella. Although character development is essential, they spent too much time focusing on her current situation, which seems to be boringly repetitive. I would have liked more background information about her life outside of the hospital. The writers could have easily added information about her past life before this disease.

In contrast to her uptight personality, Will Newman, another hospital patient, is later introduced as someone who sees Cystic Fibrosis as nothing more than an obstacle to his daily tasks. He likes to ignore the rules to make him feel as though he is in control when in reality, he wasn’t. The mix of these two personalities was a great example of how two different teens can respond to the same life-threatening disease.

Although the characters’ lives were interesting, the movie is really only developed once Will introduces himself to Stella. Things get started once we realize their relationship was almost impossible, and patients with Cystic Fibrosis are not allowed within six feet of each other. The fear of catching the other’s bacteria, which very easily could result in death, is what drives Stella away but brings Will closer.

Despite the contrast of characters spicing up the movie, they should really elaborate on how he is a difficult and frustrating patient to deal with. Anyone struggling with cystic fibrosis knows just how serious this disease is. Newman’s personality is seemingly dangerous to kids watching and thinking that it was an ok way to act when his life was being put on the line multiple times.

From this point on, the story’s plot seems to uptick with them repetitively hiding from Nurse Barb (Kimberly Hebert Gregory) and sneaking around the hospital while their lust for each other grows.

In conclusion, the message behind Five Feet Apart is one of the best qualities about it. In today’s times, I would recommend it to anyone who is feeling lonesome. The theme motivated me to get out of my comfort zone and experience life because you never really know when death could take it from you.