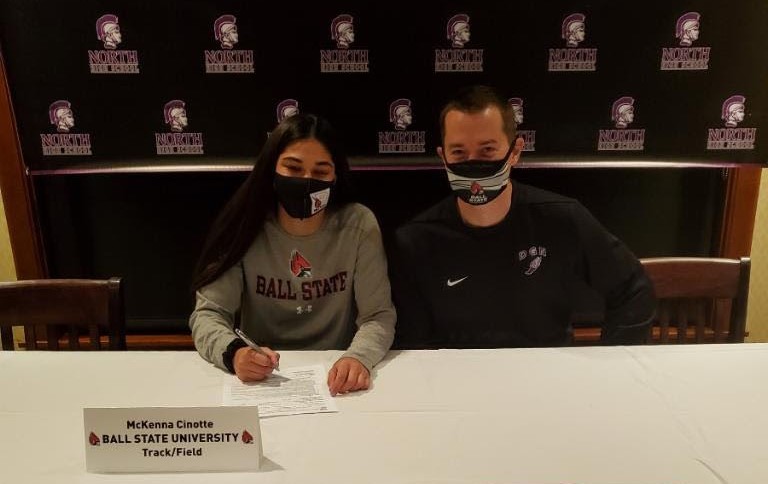 SIGNING THE DOTTED LINE: McKenna Cinotte (12) makes her final decision in committing to Ball State University Nov. 11. She sits with Head Track and Field Coach Matthew Maletich for support of her future.

Senior McKenna Cinotte walked into the purple gym her freshman year, ready for her first-ever day of track and field with a smile on her face. Fast forward four years and she’s graduating with the same attitude she walked in with, plus her division-one commitment for track.

“When you step into an arena like the state meet for the first time, two things can happen: you can look around and decide that you do not belong there with the elite athletes, or you can step up and decide that you can compete at this level,” head track coach Matthew Maletich said.

Cinotte has since proved she is one of such athletes. Although she had a late introduction to track and field, she had shown immediate signs for a promising athletic future.

“During freshman year, I started track and loved it, but after state, my sophomore year was when I really knew I wanted to compete at the collegiate level,” Cinotte said.

Competing at a state level may already be a peak for most athletes’ careers, and qualifying for state sophomore year is rare for any athlete. This was a clear indication that collegiate level track was approaching.

“Her sixth-place state medal in the triple jump her sophomore year was a big hurdle to overcome and I believed that she could compete at the state level. It took a lot of disciplined training, competing and faith,” Maletich said.

However, Cinnote’s athletic career doesn’t stop there. Throughout the pandemic, she has not shied away from her future goals and has even taken the next step towards her future by officially signing to Ball State University.

“When I received my acceptance letter, it all became more real and exciting. My last step was to sign the National Letter of Intent,” Cinotte said.

Through it all, Cinotte’s love for track and field is what drives her to do her best. Each day, she has used her positive attitude and skill level to motivate those around her, including junior Gretchen Lucina.

“Kenna really pushed me to make the final decision of being on the track team, and I am so glad that she did. Ever since then, she has been by my side and helped me improve in my event, triple jump, which has made practices so much more fun,” Lucina said.

Without Lucina’s older sister doing the same for Cinotte her freshman year, who knows what she would have accomplished or what she would be doing right now. But, through her experience, she knows how important it is to take advantage of all new opportunities.

“I would love for people to understand that it can never be too late to try something new. Take every opportunity you can because it could change your life without you even knowing it. Just giving one more degree of effort can be life-changing,” Cinotte said.