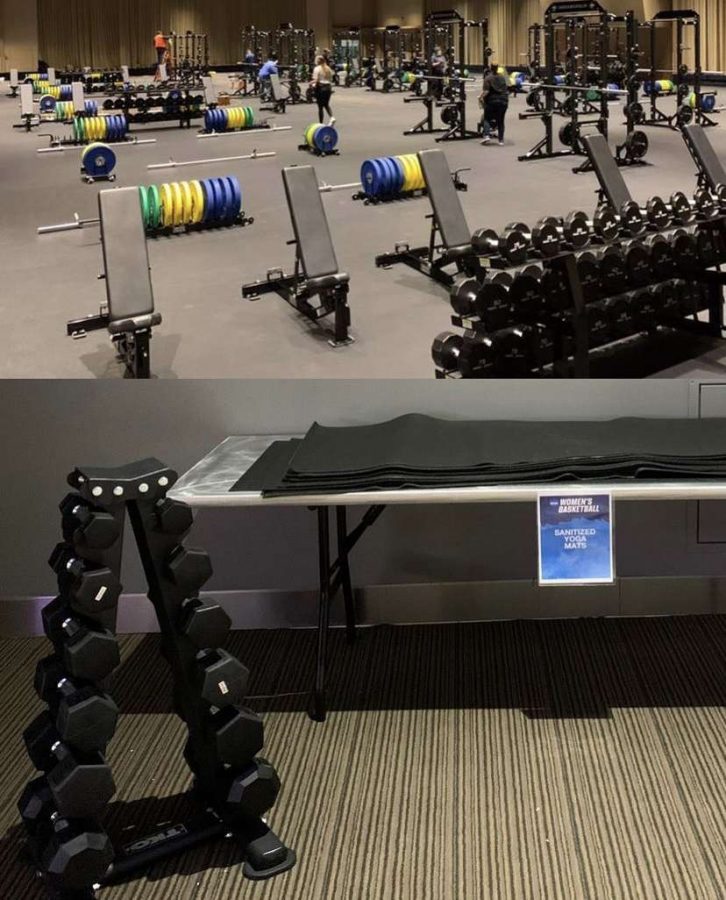 GENDER DISPARITY: Images showing differences between the men’s weight room (top) and that of the women’s (bottom) went viral during March Madness tournament.

Head-to-Head: was NCAA out of line for prioritizing men’s tournament over women’s?

As a woman who plays basketball, there is nothing more frustrating than having your achievements or worth as an athlete be marginalized by the sexist and discriminatory messages that our society consistently amplifies and promotes: “You don’t matter. You are lesser than the men’s teams. No one cares about women’s sports.”

These messages are evident in things like the number of fans at my high school basketball games, the comments people make discussing the legitimacy of the WNBA, and the disparities in funding and resources between men’s and women’s teams-as seen during this March Madness tournament.

The disparities between the women’s “weight rooms,” tournament apparel, COVID-19 tests and meal options in comparison to the men’s accommodations make obvious which gender the NCAA values. This blatant display of sexism is unacceptable, and there is no excuse for it.

It is no secret that the men’s March Madness tournament offers huge financial gain for the NCAA. But the problem lies not in the fact that the men’s tournament generates more revenue, it’s that people all too often equate money with equality. Just because the women’s teams generate less revenue, it does not mean that they are undeserving of equal treatment and respect.

It is not an extreme drain on the NCAA’s resources to provide the women’s teams with an average-sized weight room. As a non-profit organization that earns and spends hundreds of millions of dollars each year with the mission of “equipping student-athletes to succeed,” it should not be difficult to provide female athletes with basic training equipment and accommodations, especially when they provide these resources to the men.

One of, if not the most, frustrating aspects of this situation is that the NCAA thought they could get away with this obvious disregard for their female athletes. After trying to hide behind a defense of “lack of space” in the women’s practice facilities (which was quickly proven false in videos shared by players and coaches such as Oregon forward Sedona Prince) the NCAA eventually owned up to their mistake, with NCAA President Mark Emmert saying, “This is not something that should have happened and, should we ever conduct a tournament like this again, will ever happen again.”

Emmert is right. This never should have happened. Men and women deserve equal treatment from the NCAA. To deny equal treatment is an insult to all the female athletes who have fought for decades (and continue to fight) for the respect and equality they deserve. NCAA, do better.

The difference in what the men and women received is eye-opening. It’s not right to give the men the amount of benefits they received, and give minimal to the women. The NCAA should have given the women more or given the men less. The gap was too extreme, it should have been narrowed down one way or another. However, before you say the men and women deserve equal treatment from the NCAA, take a look at some of the numbers, and see why the NCAA did what they did.

Men’s basketball is the primary “money maker” for the NCAA as a whole. Bringing in over $700 million on average each March, men’s basketball makes more money than any other collegiate sport. In 2019, the men’s tournament brought in $1.05 billion.

On the contrary, the women’s tournament makes far less money than the men’s, and the NCAA loses money through women’s basketball every season. The women’s tournament brings in about $35 million a year. However, NCAA president Mark Emmert recently shared in an interview that even after the tournament, the NCAA loses 14 million dollars throughout the women’s season. This is due to the costs of funding a national basketball league and the lack of revenue from ticket sales and viewers of women’s basketball.

It seems evident that men’s basketball is far more valuable to the NCAA, and rightfully so. While I would love to see gender equality in sports, it seems unreasonable to me to treat a multi-million dollar tournament the same as one that ultimately puts the organization in debt.

I will say, the treatment gap is pathetic on the NCAA’s part. But at the end of the day, the men’s teams fund the women’s tournament, and the women’s tournament loses money. Before female participants call the NCAA “unfair” or “unjust”, they should keep in mind that they’re talking about an organization that, for a lack of better words, donates money to give them their only opportunity to play, while they make the organization zero profit in return.

The argument will always be made that women’s college basketball can’t be treated equal to men’s until they make similar revenue. If you want to see more equality, watch the women’s March Madness tournament. So many people say they want the NCAA to treat the men’s and women’s tournaments equally, yet they can’t recall one match up in the women’s bracket. It’s one thing to say you’re an advocate for gender equality in sports, it’s another to do something about it.

Gender inequality in sports is prevalent at all levels, not just collegiate and professional. We see it here at DGN too. This is a problem with such an easy solution, it’s just a matter of us taking action.

Some of our most successful DGN teams in years past have been girls’ teams: girls’ basketball won conference this year, so did gymnastics, and in 2018, our girls’ volleyball team took second in the state championship. Women’s teams at all levels can’t be treated the same as men’s teams if the men’s teams attract triple the money and fans. So if you want to do something about gender inequality in sports, go to a girls’ lacrosse or soccer game this spring, fill out a women’s march madness bracket and tune into games, watch a Chicago Sky game. Every viewer makes a difference, and if we all give women’s sports the appreciation we believe they deserve, maybe the NCAA will too.