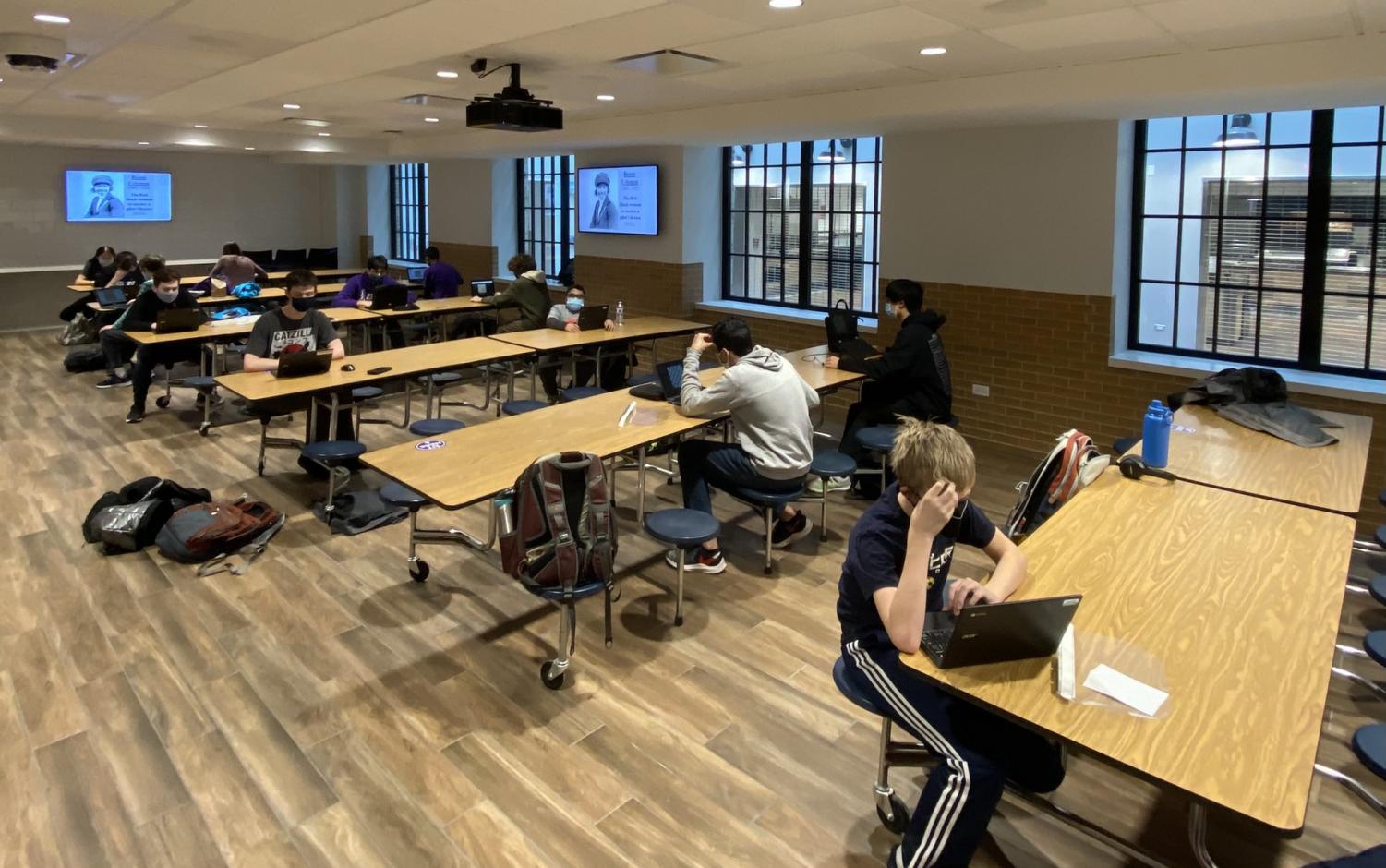 TOGETHER BUT APART: Members of the DGN Chess team meet up in-person for the first time to compete at the virtual 2021 state tournament. (Photo by Bennett Joseph)

TOGETHER BUT APART: Members of the DGN Chess team meet up in-person for the first time to compete at the virtual 2021 state tournament.

The DGN Chess team capped off a successful 2020-21 season with a second-place finish in the West Suburban Silver Conference and a 35th place finish out of 113 teams at the state competition held on Feb. 12 and 13. The team was led by senior Patrick Heverin and junior Rohit Rajput, who finished first and third, respectively, out of the 98 competitors in the conference.

As a result of the COVID-19 pandemic and similar to the format of gymnastics meets, the IHSA decided to forgo traditional in-person chess matches in favor of virtual competitions held over Zoom. But the unfamiliar online format didn’t phase the team; Heverin points out that this year’s performance was one of the team’s best.

“This year has easily been the best year for DGN Chess since I have been on the team. In our conference we won seven out of eight games, tying the record of Glenbard West and beating Hinsdale Central, both teams that finished in the top 10 at state last year,” Heverin said.

Further evidence of the team’s success can be found in their statewide accomplishments. This year’s 35th place finish at the state competition is an impressive improvement from the team’s 112th place finish out of 126 teams last year, and although this season’s atypical format presented challenges, the team was able to adapt and excel.

The IHSA was able to implement a remote-only match schedule by allowing players to compete via an online chess program called Lichess. Members from each team were able to play each other virtually through the program while they were also logged into a Zoom meeting with their team.

Much like remote learning, online chess has a host of advantages and drawbacks. For many members of the chess team, the virtual format was more convenient than traditional play. Rajput does most of his individual practice with chess engines, which are computer-based opponents that generate the most effective move in response to a player’s moves, so the transition to online play wasn’t too difficult.

“For me, most of the preparation is online because I usually look at a chess engine and look at what moves are the best because once you get to a high level of the game, there are certain moves that are known as openings; they’re the best moves known by the engine. So that’s how I’d usually prepare, even if it was an in-person chess team.” Rajput said.

Junior Adam Sitabkhan also adjusted to remote practices and competitions with ease, explaining that it allowed him to be more relaxed and removed the additional responsibility of recording his moves by hand.

“With online play, I could be having a snack or listening to music while playing, which made the playing environment more comfortable.” Sitabkhan said. “For in-person competition, we would have to manually write down all of our moves and use the timer while playing, but the site we played our matches on does all of that for us automatically, which was very convenient.”

Although not ideal, the online format still allowed for freshmen experiencing their first year on the chess team to be able to mesh into the group with relative ease. Freshman Joey Leckie, one of the three freshmen who competed in the eight-person lineup at State, enjoyed the atmosphere of practices and matches with the team despite the physical distance between his teammates.

The community of the [team] has some really outgoing leaders that help encourage everyone to join in on an environment where, even on Zoom, everyone is very social”

“The community of the [team] has some really outgoing leaders that help encourage everyone to join in on an environment where, even on Zoom, everyone is very social…While it is obviously better to be in person, I think that they handled it really well,” Leckie said.

Freshman Kayley Creagan, who also competed at the state competition, attributes the creation of such a supportive environment to the positive mindset of the team.

“Of course there were occasional glitches with Zoom, but as a team, I think we all did very [well at] coming to all of our Zoom practices with a great attitude and ready to improve at chess,” Creagan said.

Despite the efficiency of the season, the online solution isn’t perfect. One of the biggest concerns of using an online platform was the possibility of cheating. Rajput explains that by copying the moves of an online chess engine, cheating is relatively simple.

“Cheating is not too difficult…You basically put your game into the engine, you can copycat whatever your opponent is doing-you just put that in the engine-and it gives you the best move to play,” Rajput said.

Luckily, precautions are in place to deter this behavior. Lichess uses anti-cheating software in order to flag players for cheating or unsportsmanlike conduct. An update on the state tournament released by the IHSA elaborated on the penalties of cheating.

“If a player is flagged for cheating or unsportsmanlike conduct by Lichess during a state tournament match…that game will be forfeited, and that player will be disqualified for the rest of the state tournament,” the update read, “If a student’s account was flagged by Lichess previously from another competition, but their account isn’t banned until the state tournament, that student will still be ineligible for the IHSA Chess State Championship.”

Even with these deterrents, Rajput points out that not all cheating is obvious; “Some people may think that they can incorporate some of their own moves along with the chess engine’s moves to make sure they don’t get caught. Most of the time I think they are caught but there’s some gray area in there where I guess some people [avoid being flagged] so that’s the bad part of being online, that it’s not really authentic.” Rajput said.

Issues with authenticity weren’t the only disappointing aspect of virtual play. While senior Jesse Wei was grateful to have the opportunity to have a chess season during the pandemic, he missed the atmosphere typically felt at the in-person state tournament.

“Coming from a 112th place finish the year before, I really wanted to improve so that by the next season I would be able to face off against the top teams in person…There’s not the same feeling of being up at the higher end of the tables where people know that you’re at the top. There are no people around who watch your team’s games because they really matter for the top standings.” Wei said.

Chess coaches Bennett Joseph and Nader Najjar are proud of the team’s commitment throughout the season. In an email interview for the Omega, they note the support provided by all members of the team at the state tournament, in which the team was allowed to meet in-person at DGN in order to watch their eight-player lineup compete virtually.

“It was incredible to see several students willing to meet at the school for two days during the online state tournament, knowing they probably wouldn’t be able to play for the team. They came to support their teammates, and it was indicative of the fantastic participation we’ve had all season.” Joseph and Najjar said.

After four years of hard work and practice invested in the chess team, Heverin is pleased to finish his final season on a high note.

“For the last four years, Chess team has provided me with an outlet to turn my energy into a skill that I can work to improve. It was great to see the time and effort that I put into the chess team translate into improvement.” Heverin said.

For Wei, chess functioned both as a mental exercise and a reprieve from the stress of school.

“Chess is a mental activity and it involves a lot of brainpower, patience, critical thinking, problem-solving, and more to play. I think I’ve grown in all these aspects mentally as a result of playing chess. Furthermore, [having] chess as a mental outlet was also an influence. Having a place where I can just have fun playing this game that I love gave me a way to enjoy myself in the face of academic pressures.” Wei said.

After such a successful season, Joseph and Najjar’s eyes are on the future. They are eager to build upon this year’s achievements and continue to develop the team.

“We had remarkable performances this season from freshmen who were new to competitive chess. It will be interesting to see them develop as players, and a joy to introduce the fun and beauty of chess to more students…Next season it will be great to come in the top 32 [at State].”