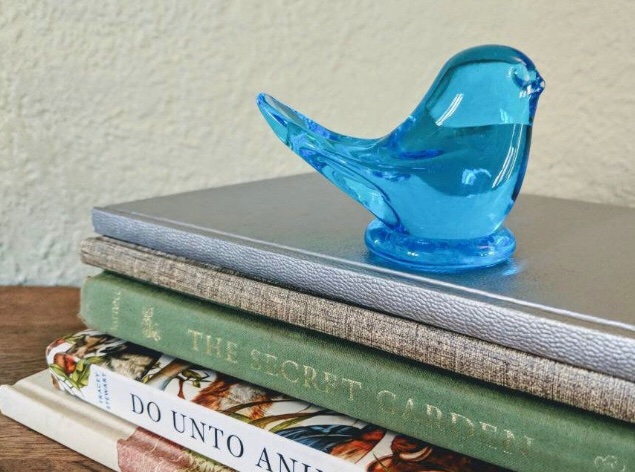 BALLAD OF THE BLUEBIRD: Perched on top of a stack of books is a bluebird figurine, gifted to Madeline Riske by her grandmother. ( (Photo provided by Madeline Riske))

BALLAD OF THE BLUEBIRD: Perched on top of a stack of books is a bluebird figurine, gifted to Madeline Riske by her grandmother.

Every year, students across the nation enter the Scholastic Art & Writing Awards, a program that offers many opportunities for teen artists and writers. Some students may win scholarships, have their work be published, or be featured in an art exhibition. There are 28 categories for students to submit their work, such as Drawing & Illustration, Film & Animation, Novel Writing, and more.

Junior Madeline Riske is one of four students in District 99 to earn a Scholastic Art & Writing Award. Riske’s poetry submission, “Ballad of the Bluebird”, has earned a Gold Key, the highest regional recognition. Her piece advances to be considered for a national award, which decisions are revealed later this month. Additionally, Riske’s “A Torn Apart Masterpiece” (Flash Fiction) and “The Box” (Short Story) both win a Silver Key Award.

In writing “Ballad of the Bluebird”, Riske pulled inspiration from her own life experiences.

“Grief has become a harsh reality for many people during these times and it’s been hard for me to watch close friends and family suffer from such painful losses, so I wrote this poem to confront that overwhelming emotion. After hearing the stories of those coping with grief, I was reminded of how the death of my grandmother impacted me when I was younger,” Riske said. “I was inspired to capture the notion that grief can linger despite passing time, and we often search for tangible reminders of those we’ve lost. So, I used a gift from my grandmother, a bluebird figurine, to touch on the idea that the people we love don’t ever completely leave us.”

So, I used a gift from my grandmother, a bluebird figurine, to touch on the idea that the people we love don’t ever completely leave us.”

Although Riske won an award for her poem, poetry is not the only style of writing that she enjoys. Riske credits English teacher Lauren Schlesinger for helping her grow as a writer.

“I also think that taking Creative Writing as a class at DGN really inspired me to develop my style and try different types of writing. While I sometimes felt distracted by what was going on in the world, Ms. Schlesinger encouraged us to channel that emotion into our writing,” Riske said. “I actually consider myself to be more comfortable writing narratives rather than poetry but Ms. Schlesinger’s support, and advice as a poet herself, are part of what inspired me to experiment with poetry and put my work out into the world.”

This is not Riske’s first time entering the competition. Last year, Riske entered a few short stories and a poem to the competition. Two of those stories received Honorable Mentions regionally, but did not move on. With “Ballad of the Bluebird” advancing to the national level, Riske’s journey as a writer does not stop there. Riske hopes to continue writing in her future to amplify voices and share perspectives.

“I plan to study English in college and, hopefully, publish my work. It can sometimes be hard for me to speak my thoughts aloud, so I want to write in order to voice my genuine feelings, discuss important issues, and elevate the voices of others through writing. I think that writing naturally instills empathy and perspective into readers, which is something that our modern world desperately needs to be reminded of, so I want to utilize my writing to remind them of the human experience that we all share,” Riske said.

I want to write in order to voice my genuine feelings, discuss important issues, and elevate the voices of others through writing.”

Read Riske’s poem, “Ballad of the Bluebird”, below.

Ballad of the Bluebird

Perched on my window sill,

Glossed over with time.

While birds are meant to fly,

she is as heavy as the memories that bind her to my pane.

Her owner takes flight, but she remains,

A tangible grounding of sapphire coloring,

I used to think if I held the finely curved shape of her figure,

I would remember more

For the smooth dip of her wing reminds me

Of the curve of my grandmother’s hand,

But she is no phoenix.

No memory will rise from the ashes of the humble bluebird.

Instead, I see my warped reflection

Mirrored in this delicate figurine.

And perhaps she is no window to the past.

It is far too much to ask her fragile frame

To carry the weight of a shattered family

And a broken girl,

But if I look close enough,

At my grandmother’s eyes.