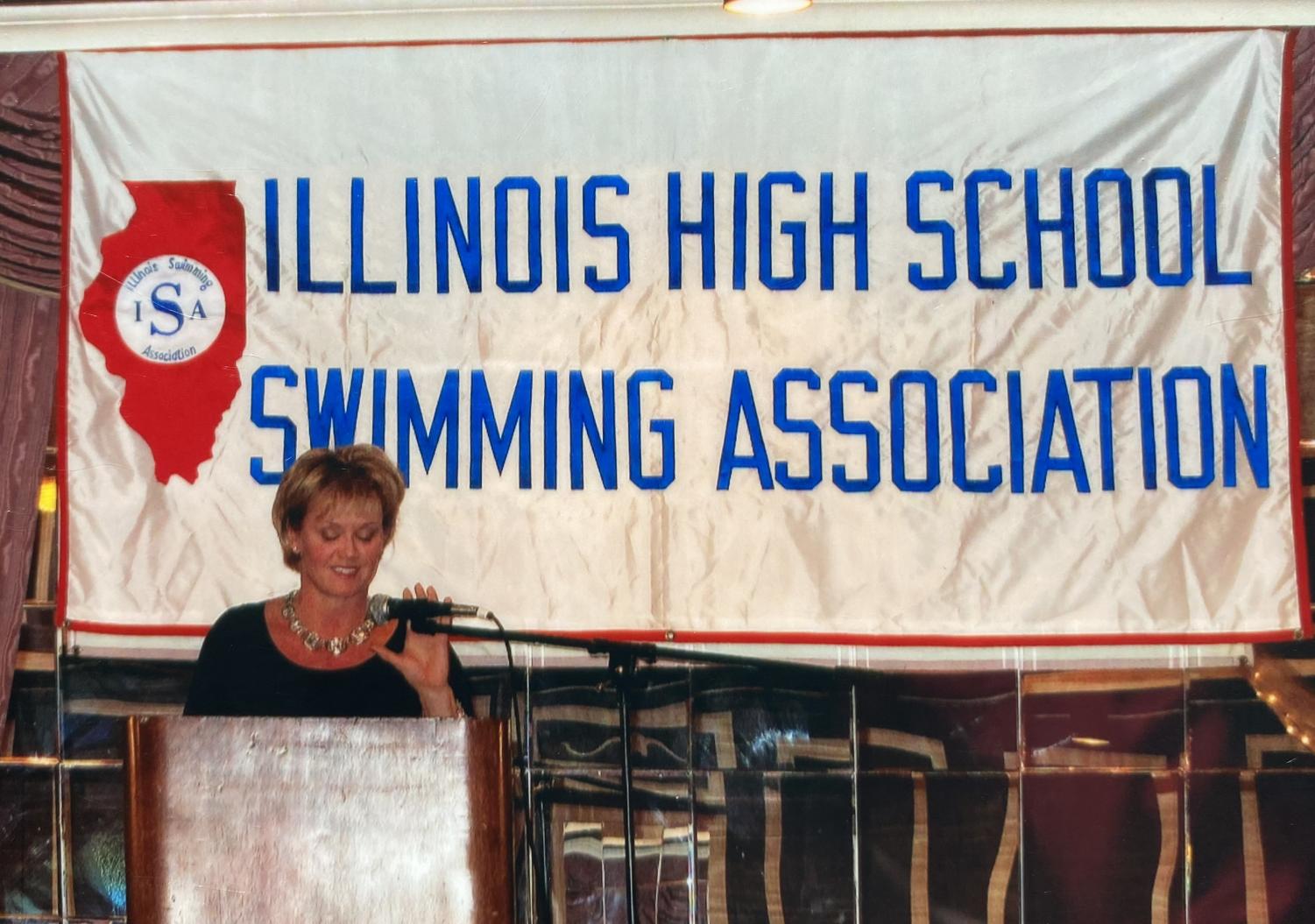 HONORING A LEGACY: Jennifer Heyer-Olsen gives induction speech as she is welcomed in to the IHSA Swimming hall of fame.

There’s a different face at the head of the DGN girls’ swim and dive program this year, but she’s no rookie to coaching swim. Former captain of the Michigan State swim team and member of an All-American Medley Relay, Jennifer Heyer-Olsen has been coaching high school swim teams since 1988. After finding much success at schools including Morton, Neuqua Valley, and St. Charles North, the six-time state champion coach is now in charge of the program at DGN.

A Lyons Township graduate, Heyer-Olsen was an assistant coach at DGN for a few years. After being the interim-head coach this past season, she will now take the reins as head coach.

She has dedicated her life to swim, but was ultra-competitive in all sports as a kid. Her love of competition from a young age has translated into her competitive coaching nature.

“I actually think I’ve played every sport you could think of at some point growing up,” Heyer-Olsen said. “That includes six years of ballet, archery, bowling, played both varsity basketball and volleyball as a freshman in high school, and didn’t start swimming until my sophomore year. I was even a cheerleader, too.”

“I won my first trophy at the age of 25,” Heyer-Olsen said. “As a young, female coach I thought this was pretty cool, and my confidence after that went through the roof, allowing me to better myself as a coach and win greater titles.”

As a coach, her top priority is not winning titles (even though she has a few of those). More than anything, the decorated coach wants to make sure all of her athletes know how much they mean to her as well as the team She views herself as more than a coach–somebody that the team can come to for anything, whether it is swimming related or not.

“I strive to make sure everybody on the team knows how much they matter to everybody, and especially how much they matter to me,” Heyer-Olsen said. “I want to touch every athlete in some way. In 1999  [St. Charles North] were the number one team in the nation, we set two national records, but the biggest takeaway was the relationships I built with those girls, and the relationships they built with each other.”

While she has only been in charge at DGN for a single season, Heyer-Olsen has already built these strong relationships with many of her swimmers, including Junior Carly Cummings. Despite working with the coach for a short time, Cummings has already been inspired.

“We are one of the only teams that has all female coaches and she was such a great role model which is very important when coaching young women,” Cummings said.

Cummings is thrilled to have Heyer-Olsen as her head coach, and is just one of the many swimmers that have been touched by this one-of-a-kind leader.

“She is so strong,” Cummings said. “She has made a greater impact on each one of us than she possibly could know, and I cannot wait to see what we can accomplish under the guidance of such an amazing coach and role model.”