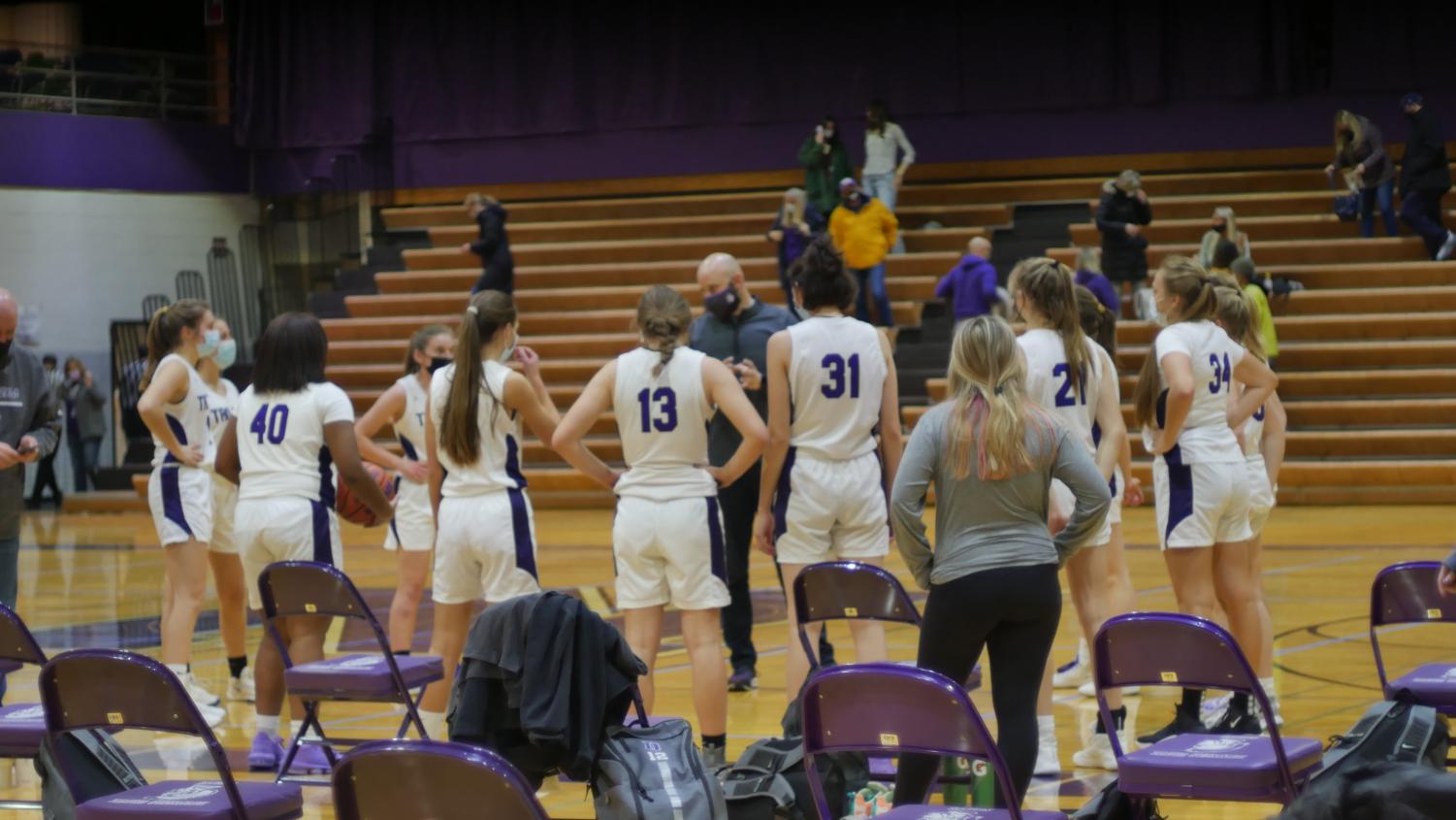 HUDDLE UP: Varsity basketball team talks over the game plan during a time out. (Madeline Schallmoser)

HUDDLE UP: Varsity basketball team talks over the game plan during a time out.

The girls’ basketball team defeated the Hinsdale Central Red Devils 42-28 in this afternoon’s match up. While the Trojan starters handled their opponent with strong shooting and great defense, the “bench” players (ironic because there is no physical bench with COVID 19 restrictions) put on a show.

Head coach Stephen Bolt acknowledged the valiant efforts of his back ups and praised their hard work and talent.

“I think our team has great depth,” Bolt said. “I mean [junior guard] Ella Sebek has come off the bench two games now and gave us a huge boost of energy, offensively and defensively. She’s not the only one, we rely on the girls coming off the bench.”

Sebek tallied up 14 points and made some key plays defensively in this afternoon’s contest. Junior Kyla Wilkerson also made some big plays in the first two games this season, and has embraced her role as a bench player for the Trojans.

“The team expects me to be able to handle the ball and the pressure of playing varsity basketball,” Wilkerson said.

Wilkerson commends the starters and captains of the girls team for what they’ve done in their leadership roles.

“The team is very close as a family,” Wilkerson said. “ Our leaders do a great job of giving us guidance in the right direction without being overbearing or annoying. They help all of us contribute to the team and are part of the reason why our bench can put up stats the way we have been.”

Scoring leader Ella Sebek gives much of the credit of their success to the energy coming from the bench.

“Even if we’re not on the court, we’re making an impact from the bench,” Sebek said.

Junior forward Eleanor Harris is a starter on the team. While she as well as the rest of the starting five played a great game, she has made it clear that the efforts of the back ups do not go unnoticed.

“They’re super talkative,” Harris said. “They always try to lift anybody up and if one of us makes a mistake they help us forget about it. Not to mention, they’ve been playing great, too.”

“I’ve talked to my returning players, sophomores who are now juniors, and I look at them as seniors already,” Bolt said. “We only have four weeks together to play, and all of our juniors, starters or back ups, have taken charge. This way we are in a great position for next year’s playoff run.”

Junior guard Ryann Wendt is one of the leaders he is referring to, and she appreciates the ownership from the entire roster.

“We don’t have one captain you could put your finger on,” Wendt said. We play for one another and want to succeed for each other.”

The Trojans have surged to a 2-0 start this year, and while there is no student section at the games, you can catch the action live every game on their youtube channel.