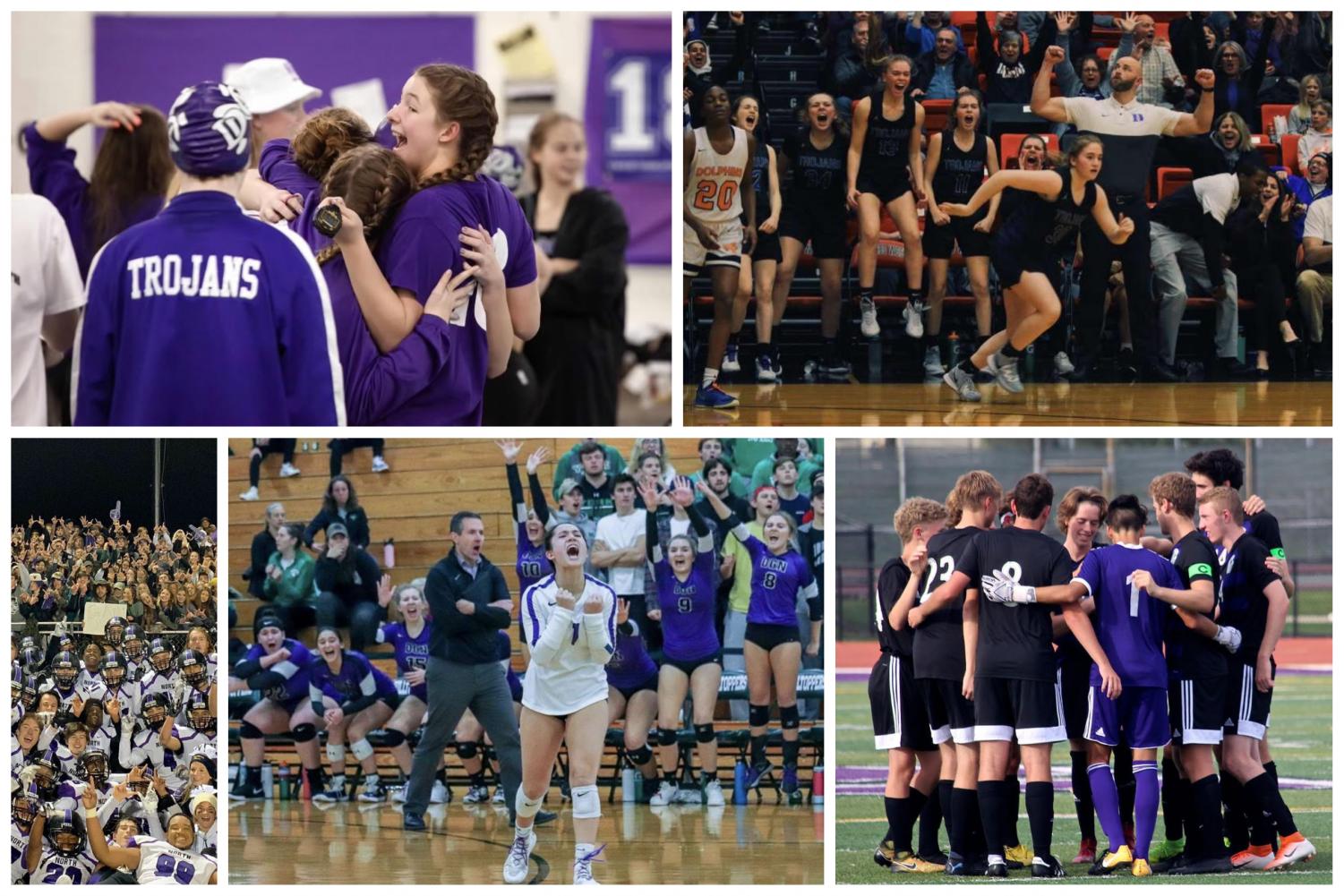 BETTER TOGETHER: High school sports resumed following a Jan. 27 IHSA Board of Directors Meeting. DGN athletics unite the Downers Grove community from the the pool to the soccer field, and everywhere in between. (Photos courtesy of Annika Paskiewicz, Ella Sebek, Reese Isacson, Maddi Cuchran, and Sam Bull)

BETTER TOGETHER: High school sports resumed following a Jan. 27 IHSA Board of Directors Meeting. DGN athletics unite the Downers Grove community from the the pool to the soccer field, and everywhere in between.

How sports saved us

March 20, 2020 would have been opening night for the girls’ varsity lacrosse team. Instead of taking the field with my team, I put on my uniform, sat in my bedroom with my stick in my hands, and cried for 3 uninterrupted hours. And I’m not exaggerating. Anyone who knows me knows that I don’t just love my sport; I live for it.

With every email ‘regretfully informing’ the team that our season had been pushed back one week, two weeks, one month, and ultimately canceled, I felt my heart being ripped out of my chest and stomped on by my brand new cleats that never even had a chance to get dirty. And even though it brought so much pain, the sport was the one thing that got me through some of the craziest, most confusing and most miserable months of my life.

The waning hope of having any form of a season got me out of bed in the mornings, and when that hope was ripped away, daydreams of games 9 months in the future got me off my phone and into my running shoes.

It wasn’t just me; athletes of all levels took to social media, sharing at-home workouts and live streaming conditioning sessions. We snapped our fair share of resistance bands trying to make our home ‘gyms’ feel like the place we missed the most–a weight room full of teammates.

When we needed them most, sports did just what they’ve always done. They united us. And not just athletes–sports brought together all fans, fair weather or not.

It was the rivalries, the nostalgia, and the glory that had 6.1 million viewers tuned into the April 19 premiere of The Last Dance, making it the most viewed ESPN documentary ever.

It was a focused competition between our favorite athletes that had 6.3 million watching Tiger Woods and Peyton Manning’s May 24 victory in the  “Charity for Champions” golf match, the most viewed golf telecast in history.

It was a childlike love of that game that had families taking a few quarantined hours to make a bowl of popcorn and flip on “The Sandlot,” “Hoosiers,” “Remember the Titans,” or any of the other countless classics.

It was memories of simpler, germier, and far more thrilling times that had us watching reruns of the greatest games in history (for example, one particular baseball game played on a rainy Wednesday night in Cleveland).

With each of these instances, sports offered us a desperately-needed escape from days of dark unknowns and monotony, and a chance to disappear into a colorful dream world of ambition, adrenaline, and wonder. They gave us a reason to get up, get active, and get connected.

But it’s a two-way street; Sports didn’t just save us from COVID. COVID, in a way, saved sports. During the two dark months without professional sports, it wasn’t all bad. The youthful innocence of the games was restored as we patiently waited to return to our local rec centers, middle school gyms, and high school stadiums.

Without live games, we made our own fun. I’d be willing to bet that rusted park basketball hoops and soccer goals saw more action in the summer of 2020 than any other since the popularization of cell phones.

On one bright summer afternoon in particular, I rounded a corner on a path at Whitlock Park. As the baseball field came in to view, I felt a smile spread across my face and a tingle in my heart: I saw three old men wearing weathered baseball gloves and striped knee-high socks commanding the poorly-groomed infield.

It was like I was witnessing a live cut scene from “The Sandlot.” I saw a beer-bellied Benny the Jet Rodriguez, 50 years and 3 world series rings later, step up to the plate, hitting ground balls to a not-so-nimble Squints at second base.

Something about the absence of sports led us to return to the most innocent versions of them. We rediscovered a true love and appreciation for the game itself.

And sports, while your absences taught us quite a bit, it is so very good to see your return. Thank you for making me the person I am today, and please, never leave us again. Go Trojans. Go Cubs. Heck, I’m so ridiculously excited to see an almost normal MLB season that I’ll even go so far as to say… go Cardinals.