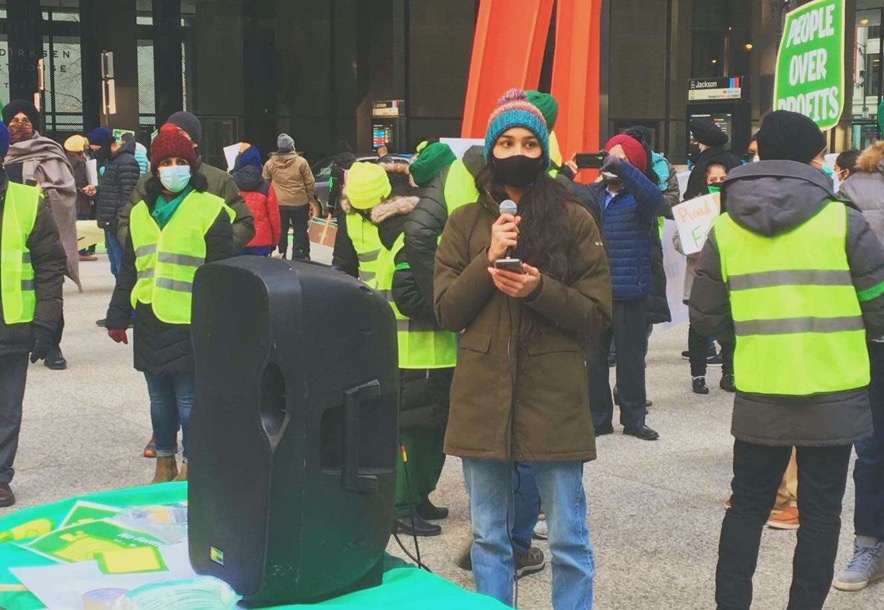 USING HER VOICE: Amneet Kaur (10) speaks about the Farmers’ Protest at a protest in Chicago. (Photo courtesy to Amneet Kaur)

USING HER VOICE: Amneet Kaur (10) speaks about the Farmers’ Protest at a protest in Chicago.

“Whenever I’ve gone to a protest, I’ve always listened to the speakers. But when I went up to speak, I felt so passionate about it and I spoke really well, which really surprised me,” sophomore Amneet Kaur said regarding her role in protesting alongside the farmers in India.

In Sept. 2020, anger broke out between farmers in India in response to three central farm legislation passed by the Indian government. The global protest has since become one of the largest protests in world history.

“There are three new laws that the Indian parliament voted for in June, and they were really rushed. [Indian Parliament] chose June because India was obviously going through COVID-19, and they assumed that the farmers wouldn’t assemble in large numbers to protest,” Kaur said. “[Indian Parliament] used COVID-19 to an advantage.”

Kaur has become outspoken about the farmers’ protest, due to family members living in New Delhi and who have been affected by the legislation.

“It started at the dinner table. My mom had called my Grandpa in India the night before [the protests happened] and he was talking about the protesters in his city. I was interested to know what these laws are,” Kaur said. “[Kaur’s grandfather] is a farmer. He, unfortunately, didn’t go to New Delhi because of his health concerns. He’s been supporting from home and telling [Kaur’s family] what’s been happening.”

Kaur has held numerous meetings to spread awareness and to educate children on the protest situation in India.

“I’ve had zoom calls with younger kids to get them to understand what’s happening. It’s hard to explain this situation to younger kids so I’m trying to explain it to them at their level,” Kaur said. “I did an Instagram live with [@sikhteens]. They asked me to talk about it because I’ve been researching it since September when the protests about the laws were beginning.”

At the Chicago Federal Plaza, Kaur spoke at a protest on Dec. 13 as a voice for the younger generation.

“I went to the protest in Chicago and I spoke there. I was the youth voice because they wanted someone from my age group to speak about it since the protest was run by people that were older than me.”

Some of the laws placed in India are taking advantage of the small farmers. One law established a private system around the public money system.

“In India, there is this public money system that has a rate, and it’s made every year based on pesticides, water, and all that,” Kaur said. “[The private system] sounds appealing because the farmers think that they could choose the prices at what they sell at but obviously, in reality, these private companies are going to create low prices and exploit farmers.”

Also in India, the current law for farmers is to grow crop and then sell it. They have introduced a new law that follows contact farming. She explains how this would affect the farmers.

“The farmers are going to have to sign a contract before they grow their crops and state their price and how much they grow. The problem with that is sometimes crops fail,” Kaur said. “Especially in India, climate change is really bad; there’s not enough water. With contract farming, if the farmer fails the contract, the farmer will be liable.”

“This has been one of the largest protests in history. Worldwide. It’s something that international media isn’t really covering,” Kaur said.