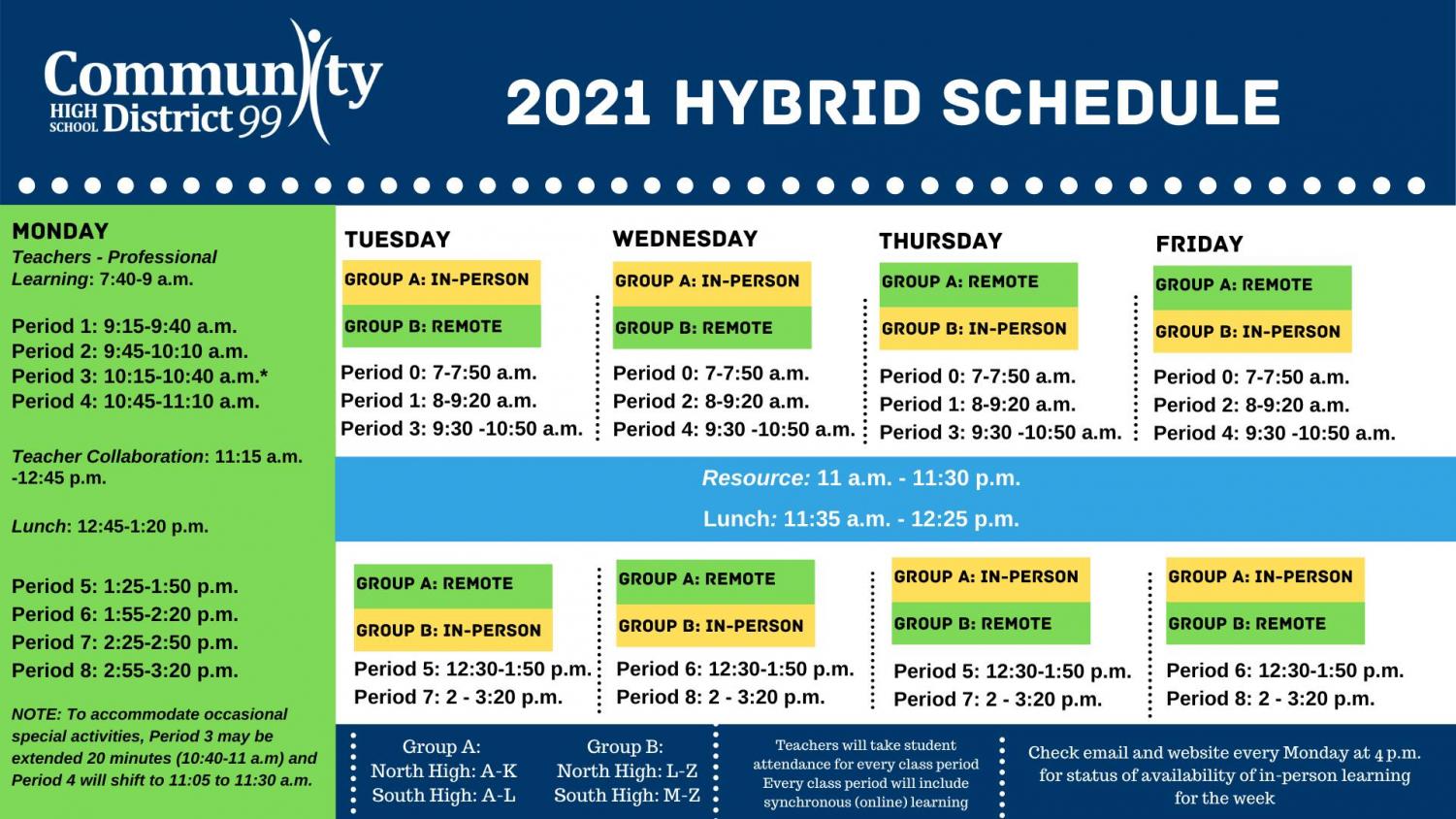 CHANGING THINGS UP: The new 2021 hybrid schedule adds to the number of in-person days and subtracts from passing period time. (Image by District 99)

CHANGING THINGS UP: The new 2021 hybrid schedule adds to the number of in-person days and subtracts from passing period time.

Apart from last week’s fully remote schedule, the 2021 hybrid schedule has been in effect since Jan. 5. Though it has left some students feeling great, others have been wishing they could design the schedule themselves. Despite being less than two weeks into the new semester, students have already formed a wide variety of opinions about many aspects of the schedule.

Changes in the Schedule

As opposed to previously proposed schedules by District 99, the new 2021 hybrid schedule calls for students to be in the building four times a week for half days. Students alternate which days they go in based on where the first letter of their last name falls in the alphabet, with two days seeing one group in the morning and the other two in the afternoon.

Another new change to the schedule was passing periods being shortened from 15 minutes to 10, but all Mondays still remain remote to allow for teacher planning and professional learning time for teachers.

After taking a first glance at the new schedule, sophomore Molly St. Clair was surprised at the lack of consistency she saw.

“I could tell that [the schedule] was going to be confusing going back and forth with being in-person in mornings or afternoons,” St. Clair said. “I also didn’t like that we were only attending two in-person classes per day and continuing with the 80 minute class periods. Sitting in the same room for 80 minutes can definitely make the day feel much longer.”

“I think I would really like it if we did 4 classes a day in-person. I think it would feel a lot more like a normal school day rather than only two in-person classes per day,” St. Clair said.

Junior Edie Pawlak has found herself fond of the new block schedule format, allowing for four classes a day as opposed to the traditional eight.

“I really like how I don’t see all my teachers every day and have more time for homework,” Pawlak said. “I think this will prepare us more for college and give us more time to breathe.”

Though initially confused at the change from a usual school day to a block schedule pattern, Pawlak has now gotten used to it and prefers it over previous ways.

“I honestly don’t care about how many times per week we go into school. I just like how the schedule is in chunks and forces you to see people and move and change throughout the day,” Pawlak said.

Given how last semester went with only two weeks of in-person learning, senior Justin Berghorst was expecting the district to attempt a less assertive hybrid model.

“I was a bit surprised and confused that the district decided to pursue a more aggressive hybrid plan, with multiple groups attending school in-person each day and no fully remote weeks planned in between cycles,” Berghorst said. “While the district likely pursued this plan given the numerous surveys that indicated that families in District 99 wanted to see their students be able to go to school in-person more, I believe that only a less aggressive hybrid model would accomplish this.”

Given the uncertainty of whether students will be in-person from one week to the next, Berghorst believes the schedule could have been formatted differently.

“I think it would probably be best to have Group A go into school one week, to have Group B go into school the next week, and then to have one week of fully remote learning.  This would allow for students to learn in person while still reducing the risk of transmission.  Splitting up weeks based on groups would be beneficial because it would allow for a lesser number of different people to be in the building during any given week,” Berghorst said.

Though Berghorst recognizes District 99’s top priority is to make sure that its students are able to learn in the best way possible, he still thinks that there are better ways that they could have gone about reimagining the hybrid plan for the second semester.

Ceramics teacher Amy Bernard enjoys the hybrid schedule as she can see her students in-person and connect with them. Managing remote students simultaneously is difficult for her, but it doesn’t stop her from having a positive experience.

“I make sure that my students have their cameras on, and are showing me their pieces while we are working. I also ask them to keep a document so I can track their daily progress, or give them short little goals to meet during class time,” Bernard said. “It’s harder to make sure everyone is on task in the remote environment because it’s more time consuming than just looking at everyone’s work in-person, but, it’s doable.”

After working through the new schedule for a few days, Bernard has found her biggest obstacle to be remembering that there are students outside the classroom.

“The hardest thing about hybrid for me is helping the students at home know I am not forgetting about them, making sure I turn my face to the camera to talk to them, and help them feel like they’re not disconnected from class,” Bernard said.

“I think many students and teachers have gotten used to the odd and even [period] schedule so it was nice to see that stay,” Heiwig said. “I was also very happy to see an opportunity to get more students into the building more often.”

With students back in the building, many teachers now have to change rooms between periods, requiring them to set up technology multiple times per day. This, combined with passing periods being shortened to 10 minutes, can add to the list of stressors teachers have to deal with.

“There are a lot of challenges including keeping track of who is supposed to be attending where for attendance, distributing materials to both groups, making sure the new webcams and sound work and trying out new ways to present information with the new tech so it was accessible to both groups of learners at once,” Heiwig said.

In spite of some bumps in the road, Heiwig has loved being back in the classroom.

“While everyone was pretty quiet, there was still more interaction and it was easier to monitor for pace and understanding,” Heiwig said. “Overall, the opportunity to have class with students outweighs all the new challenges.”

Though Heiwig wouldn’t personally change anything about the current hybrid schedule, she is hopeful to see more students in the building once guidelines allow school districts to do so.

Freshman Drew Hardy is a fan of the new hybrid schedule and how it increases the amount of time he can get in the building each week.

“When I first saw [the schedule] I was excited because before we only got to go two days a week and now it’s four which is good because we get to go to every class each week we are in school,” Hardy said. “I like how we switch up morning and afternoon because sometimes it’s good to wake up early and other times it’s good to sleep in a little bit. I was mostly just happy because I didn’t like sitting at home all day every day during the week.”

Social studies teacher Karen Spahr-Thomas has found the new schedule to work fine for her.

“I think the 10-minute passing period is better when we are in-person as there is not as much downtime in between classes,” Spahr-Thomas said.

Aside from working around the new schedule, Spahr-Thomas is grateful to be able to establish better relationships with her students.

“I was very glad to see students in person last week and start making connections with them, specifically those that are new to my second semester Law classes,” Spahr-Thomas said. “The challenge is trying to keep track of students who are remote during the class.  The remote students can see and hear me during class, but much of my focus is on the students in-person asking and answering questions.”

Junior Annie Cash has decided to stay completely remote for the remainder of the semester and dislikes District 99’s attempts at pushing for students to return to in-person school.

“I understand they are trying to do what they feel is best, but what is truly best is for everyone to stay home,” Cash said. “This back and forth of hybrid to fully remote gives students a false sense of hope. I’m not trying to say people aren’t struggling but everyone is; one person’s struggle is no more important than another person’s.”

Even with some students’ grades being lower first semester as a result of remote learning and other factors, Cash believes that safety should be the top priority.

“Just because we want to go back doesn’t mean it’s what’s best for our lives. People need to realize that this isn’t a matter of A’s and C’s but life and death,” Cash said.

Though the Board of Education has not discussed making any modifications to the 2021 hybrid schedule thus far, their vote to raise the community threshold from a 9% positivity rate to 10% allows for an increased chance of utilizing the weekly hybrid schedule.