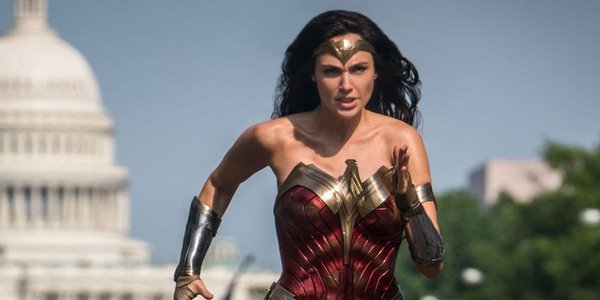 In a time when bleakness and desolation douse the world, Wonder Woman 1984 washes away the pandemic’s forlorn stain with a gratifying glimmer of vibrance, light, action and profound entertainment.

Released Christmas day in theaters and on HBO Max, Wonder Woman 1984 mainly transpires in Washington, D.C. 66 years since the events of its 2017 prequel, Wonder Woman. The plot revolves around Diana Prince (Gal Gadot), the film’s main heroine. Despite regularly fighting crime as Wonder Woman, she works in disguise as a senior anthropologist at D.C.’s Smithsonian Institution.

Not long into the movie, Diana encounters a new colleague, Barbara Ann Minerva (Kristen Wiig), a meek, insecure woman who quickly covets and idolizes her. After Diana anonymously recovers a stolen antiquity cache, one particular relic, “the Dreamstone,” captivates her and Barbara and attracts failing businessman Maxwell Lord (Pedro Pascal).

The Dreamstone, having wish-granting powers, soon arouses several enthralling events and plot twists into occurring. Diana unknowingly wishes upon the relic for her deceased former lover, Steve Trevor (Chris Pine), to return; Barbara to be like Diana; and Maxwell, after secretly stealing the Dreamstone, for it to embody himself so he can escape his career blunders.

The relic grants all three wishes, but with detrimental consequences. Steve returns at the expense of Diana’s superpowers. Barbara gains strength and special abilities yet loses her goodwill. And Maxwell can soon grant wishes to himself while yielding them in exchange for whatever he takes from the wisher. Worldwide havoc and destruction soon unfold as the Dreamstone’s power takes a greedy grasp on the world–and only Diana can save the day.

Overall, Wonder Woman 1984 was an interesting, creative film. Its mysterious, ever-changing plot will allure any viewer, and its complex, action-packed nature will not disappoint. I literally could not prevent a genuine “wow” from escaping my lips during its intense climax, which flawlessly represented the chaotic costs of the world “having it all.”

Although the film did contain a satisfying series of gripping climax events, I was quite disappointed with how slow the movie initially played out. For the first hour or so, the movie dragged on as it set up its characters, setting and main storyline. While this was likely because everything in the film was so intricate and therefore required an elaborate framework, I nevertheless feel the pace could have picked up a little faster with all the essential details still being covered.

Wonder Woman 1984 also emphasized a lesser-known villain, Maxwell, instead of Wonder Woman’s infamous arch-enemy, Cheetah, whom Wiig portrayed in the film’s later affairs. It would have been more exciting if Cheetah (formerly Barbara) was the movie’s main antagonist instead of Maxwell, or she at least could have appeared in more scenes than she did.

There really weren’t any other letdowns, at least for me. Ultimately, the film made up for my initial dissatisfaction with it by incorporating several exciting, captivating details.

As opposed to its dark, war-based prequel, Wonder Woman 1984 contained an abundance of color, light and energy, even in its catastrophic battle scenes. Whether it be vibrant fireworks exploding or intense conflicts full of otherworldly superpowers, the movie’s cast and compelling performances are not the only things placed in the spotlight.

Another quite intriguing aspect was its thrillful soundtrack. Although, with award-winning composer Hans Zimmer having created it, this comes as no surprise. Zimmer endorsed Wonder Woman 1984 with enticing battle themes, playful tunes during the film’s numerous humorous scenes and touching, emotional chords in the movie’s climax and resolution. In the end, his musical contributions to this film will both move and energize many an audience.

Despite displaying some distinct flaws, Wonder Woman 1984 executes great entertainment, intense action and a compelling story. One does not need to be a superhero fan to enjoy this fiery film, as it undoubtedly will excite anybody with its explicit plot, vibrant nature, brilliant score and lovable tale of female strength, the dangers of greed and the power of truth.